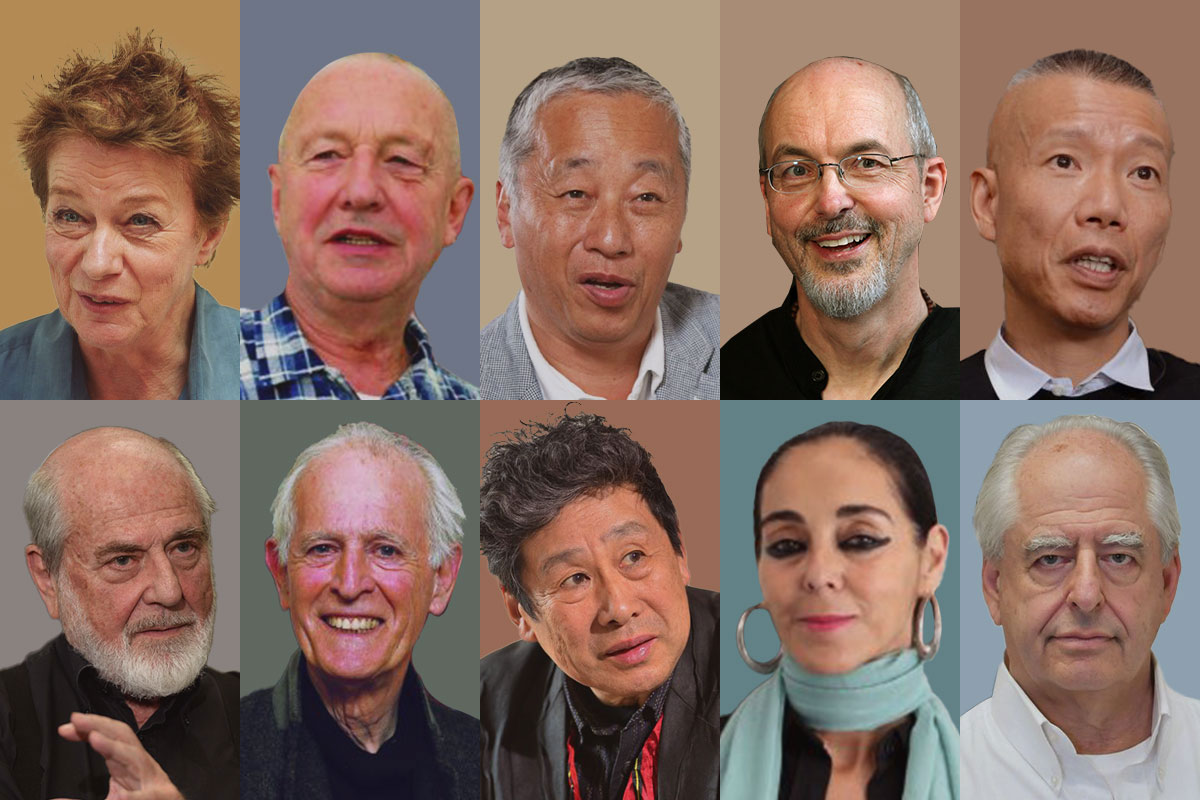 ~Let the slow steady work in the studio illuminate and give comfort to many of the conditions beyond it. This has been one of the central roles of art over millennia, and it  seems as important now as ever before (2019 Painting Laureate, William Kentridge.)~

Part two: Praemium Imperiale Laureates in the category of Painting

Part three: Praemium Imperiale Laureates in the category of Sculpture

Part four: Praemium Imperiale Laureates in the category of Architecture

Part five: Praemium Imperiale Laureates in the category of Music

Part six: Praemium Imperiale Laureates in the category of Theatre/Film

Among the pleasures of autumn, the annual Praemium Imperiale Awards are among the most highly anticipated in the global world of arts. This year, the 32nd anniversary of the awards ceremonyーinitiated by the Japan Art Association in 1988 to honor the artsーhad to be postponed until October 2021 due to the coronavirus pandemic.

To reaffirm the importance of the arts, the organizers asked previous Praemium Imperiale laureates for their thoughts and reaction to this pandemic.

The wide variety of encouraging messages received from a total of 5 international advisors and 49 laureates in five categories have been compiled into a special issue of the 2020 Praemium Imperiale Yearbook, providing a valuable testimony of this global crisis from the great artists of our time. Their comments are presented in six parts, according to the artist’s form of participation and artistic category.

Excerpts of the varied and thoughtful comments of the Praemium Imperiale Laureates in the category of Painting follow:

We have to learn how to live with it which takes self discipline, patience, optimism, tolerance and a little humor.

When plague broke out in the Middle Ages, people believed that God was punishing man. Now, however, God has lost the power to punish. Instead I see the laws of nature inflicting punishment upon us. Human civilization grows through the exploitation and destruction of the natural environment. As a species humankind has achieved criticality and hit the limits of growth. In a bid to save itself, nature has triggered the automatic correction function, signaling us to rein in our activities. (Source: The Yomiuri Shimbun)

In Madrid, which suffered one of the highest death rates in Spain, Fundación Telefónica in June has now with great care reopened our exhibition to the public, reporting that this has been like a balm to visitors needing healing after the fear and grief of the previous months. This is what we hope for, for the public to have access once again to the comfort and solace that art brings. (Kira Perov on behalf of Bill Viola)

The sudden pandemic has disrupted the world’s geopolitical balance and challenged existing political systems. We appear even more divided while facing a common threat. The pandemic has strained Sino-American relations as well as relations all over the world. Globalization has begun to cede to national protectionism…. The question is, will this lead people to self-reflection? This includes reflection on nature; can the pandemic improve our relations with each other and with nature?

Humanity has been waiting for a new way of thinking and a new vision for a long time now…. Everybody is talking about how different the world will be after the pandemic, how humanity will be changed. In the empty galleries that are no longer packed with crowds, perhaps our artistic predecessors will chuckle to themselves, “Didn’t we create the paintings on these walls amidst pandemics and World Wars anyway?” For it was indeed under the shadow of the Black Death that Dante wrote The Divine Comedy, that Giovanni Boccaccio wrote The Decameron, that Shakespeare wrote King Lear and Macbeth…their unbounded creativity ignited by the bitterness of suffering.

As for myself, I have for decades been carrying out an activity as an artist that I have dubbed “Regeneration of Society.” I hope that the impact of this crisis is going to stir up human creativity profoundly and lead it to establish a real balance between artifice and nature, so as to make this regeneration feasible.

I view the majority of what is presented as Art today as totally decadent and I do not think that a renewal may emerge from the effects of this serial killer, other than a commercially-driven demagogic display.

We have no idea when this pandemic will end, but as long as people keep catching the coronavirus, I’d like to keep on creating works for my WITH CORONA series. This title literally means to live with the coronavirus and get it on our side, so we can thrive together. By facing life and death in our everyday lives and by looking at ourselves and others, we can upgrade our mindset. I believe we need to think bigger than just thinking about the Earth, and develop a cosmic consciousness. We have to go past the stratosphere and head out further, far into the depth of the cosmos. We human beings need to brace ourselves for dealing with an entirely new experience regarding time and space. I feel that this new experience will be like a new Odyssey for Humanity, and I hope my soul will continue to travel with it.

Today, as I write this note, while shaken inside and struggling with nihilistic thoughts of my own, having witnessed human suffering and political chaos within a short time, strangely I find the urge to regain my faith in art and its transformative power, and the will to search for more glimpses of reflection, strength, and most importantly hope for our future.

There are obvious new forms of interaction and communication in the world — webinars, zoom, virtual performances — practices which existed already but are given new prominence. But it has not changed for me the fundamental questions of what it is to be working and making in the studio. There has to be confidence that the slow, long questions one works with are connected to the world as well as to the studio and let the slow steady work in the studio illuminate and give comfort to many of the conditions beyond it. This has been one of the central roles of art over millennia, and it  seems as important now as ever before.

About the Praemium Imperiale:

The Association chooses the winners based on the recommendations of individual International Advisors in England, France, Italy, Germany, the United States, and Japan. Each advisor is guided by the recommendations of a nominating committee, comprising cultural leaders from his home country. The international advisors are leading figures with a deep interest or involvement in the arts. International advisors to the Praemium Imperiale chair nomination committees and propose candidates for the annual awards. Japan Art Association selection committees make final selections. Selections for the 32nd Praemium Imperiale awards will be presented at a ceremony in October 2021.