The Year in Our Stories: International Friction that Focused Our Attention in 2020 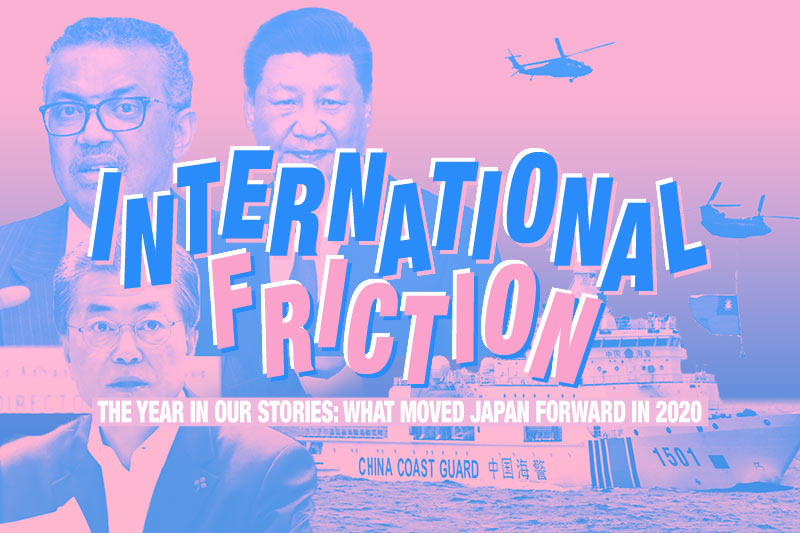 We begin with a look at the international friction that clung to the coattails of COVID-19, and Japan’s perspective and response. Please join us.

As 2020 comes to a close, we at JAPAN Forward are reflecting on the stories that moved Japan forward this year. While SARS-Cov-2ーthe virus that causes COVID-19 dominated every facet of our news and daily lives from the end of January,

and is recounted here and here, the pandemic it spawned led to changes that left a deep mark on Japan and the world around us.

The region was battered by alarming international friction, moved into inspiring levels of international cooperation and reassured by the democratic processes at work in domestic politics. In spite of the coronavirus pandemic, Japanese technological skills and innovation soared to new heights. Meanwhile, we found offerings of more creative advances than ever, spreading Japanese pop culture far and wide in a world hungry for good news.

Each day for the next five days, our editors will be sharing a few of the stories in the categories that dominated our stories in 2020. We begin with a look at the international friction that clung to the coattails of COVID-19, and Japan’s perspective and response. Please join us.

2020 opened softly, as if unaware of the dangers lurking in the year ahead. Tokyo Tower was lit on January 26 in a display of solidarity with fellow regional democracy Australia, suffering tragic wildfires on its national day. We took time to look around the region and pondered whether U.S. angst over China might be diminishing as Japan joined multilateral partners in operations to support freedom of the seas in the Middle East.

We cheered as Taiwan held free and fair democratic elections.

At the same time, we watched to see whether China would use the opportunity to contribute to the peace and stability of the region, or engage its massive force in a push to alter the status quo. We did have long to wait.

In moves destabilizing to the entire region, China set off on a path of continued intimidation and diplomatic maneuvering to isolate Taiwan, bullying world bodies to exclude the only ethnic Chinese democracy and success story against COVID-19 from some of the most important deliberations of the year: the global pandemic caused by the virus that originated in Wuhan, China.

Yet it took a student studying infectious diseases in the U.K. to call out the WHO for its attempts to smear Taiwan and other China centric behavior to justify excluding Taiwan from the world body.

By this time, the WHO had acknowledged a global threat from the Wuhan-origin coronavirus that it earlier said showed no evidence of human-to-human transmission, and finally called it a pandemic.

As the rest of the world coped with the health, social and economic consequences of the pandemic it had unleashed, China moved into full offensive gear, first attempting to silence foreign press by revoking their credentials if they questioned Beijing’s line on the origins and impacts of COVID-19 in China. By this time, some scholars and writers were also questioning the deeper motives of China’s behavior with the virus.

Territorial Grabs Under the Cloud of COVID

In April, Beijing swept into the South China Sea, projecting its territorial jurisdiction over the islands and outcroppings claimed by several neighboring countries.

But it didn’t stop there. Xi Jinping sent the China Coast Guard to manage its maritime militia of fishing vessels for a full-court press against Japan’s Senkaku Islands, which, our writers inform us, China began claiming only when oil fields were discovered in the vicinity.

Not to isolate Japan, Beijing is pushing its military beyond the Indian border in the Himalayas, engaging in the most serious armed conflict with India since 1975. At the same time, it has been maneuvering in Nepal, and using its economic clout to gain a foothold in the Pacific Islands that threatens U.S. bases in Guam and elsewhere. One observer summed it up here.

As this was going on, our writers began to look more closely at some of China’s research and publications that might shed light on its aggressive behavior during the virus and human rights crackdowns in Tibet, Xinjiang and Inner Mongolia. Read some of our stories, here.

But it was Hong Kong that stole the show in Japan and around the world. Held up as a model, China proceeded to bring down “one country, two systems” in one fell swoop on July 1, when it imposed the Chinese Communist Party’s new National Security Law on the Hong Kong Special Administrative Region, denying Hong Kongers the freedoms guaranteed under China’s 1984 treaty with Great Britain.

Continuing Friction on Other Fronts

China may have been most of the story, but there was friction in other areas as well. Japan’s talks with Russia on return of the Northern Territories grabbed after Japan’s surrender in 1945 did not move forward.

Japan-South Korea relations continued to be shaky as the firmament of the 1964 treaty under which they normalized relations has been brought in question by the South Korean courts.

The Japanese victims abducted by North Korea did not come home, despite the Japanese government’s efforts. We were reminded of the continuing pain caused by North Korea’s behavior when two of the victims’ parents died during the year, without seeing their loved ones.

But at the end of the year, it was China’s “wolf warrior” behavior that focused our attention on frictions in Japan and around the Indo-Pacific.