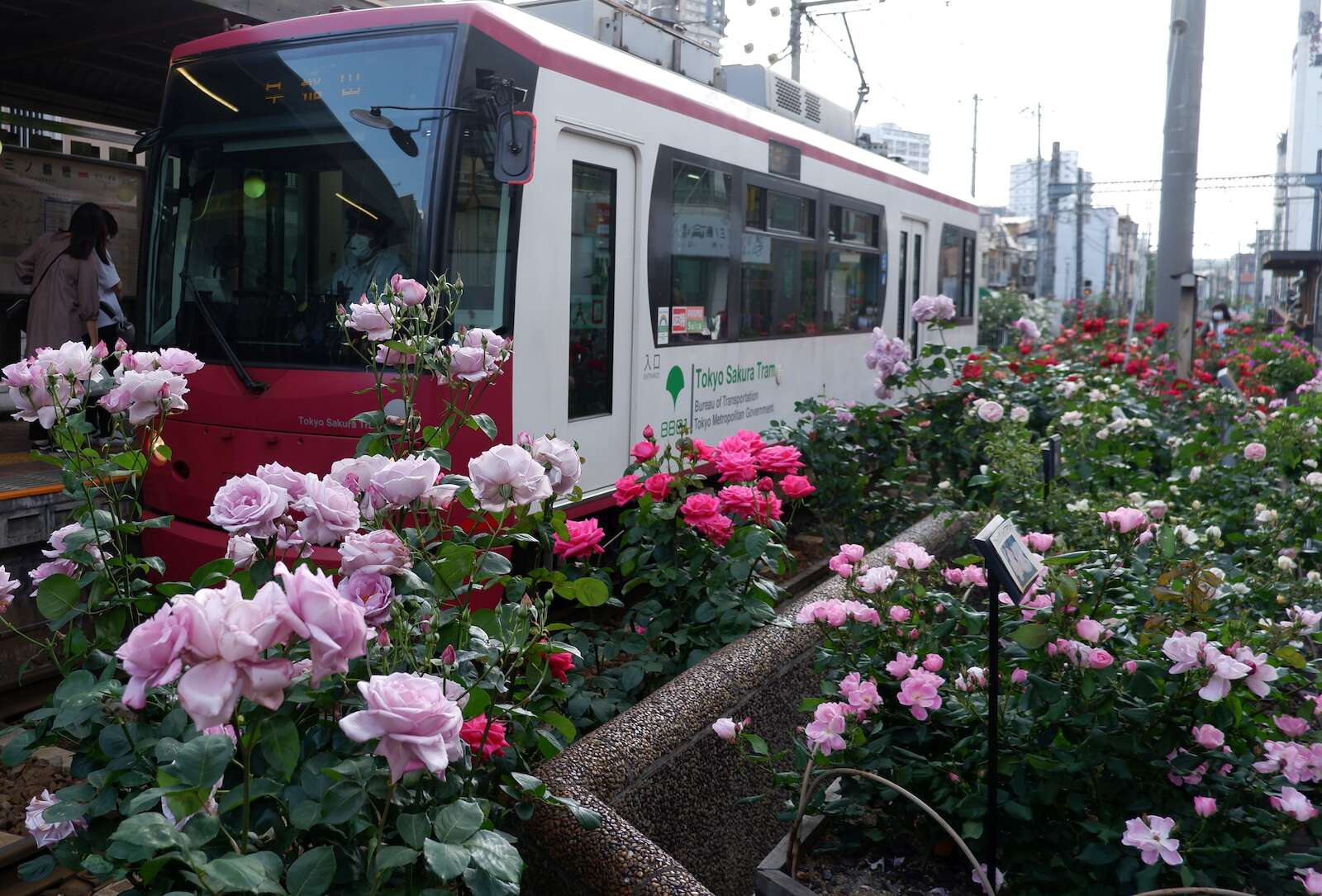 Tokyo has several popular rose gardens, but because of the emergency declaration currently in effect, those in gated parks controlled by the municipal government are closed. That includes Furukawa Teien taken up in my June 2019 JAPAN Forward article. Even when noted rose gardens are still accessible, it may be advisable to avoid them this year because they are a magnet for crowds.


There is, however, an alternative for rose lovers that is inherently completely open access: the roses lining the Arakawa Line tram tracks in the Arakawa Ward. While the Arakawa Line is well-known by Tokyoites, it is so spread out that it does not generate intense crowding.

(For details about interesting stops, read “Trams Through the Blossoms: Discovering Tokyo on the Arakawa Line.”)

Some 14,000 rose bushes representing 140 varieties have been planted along the tram, beginning at the Arakawa Shako-mae stop and extending to the eastern terminus at Minowa-bashi.

The rose planting is supported by the Arakawa Ward municipal government, which gives an orientation program and lends tools to the volunteer group that cares for the rose bushes.

The roses along the line usually come into full bloom in mid-May, but warm weather has produced an early flowering this year. When I photographed the roses on May 7, some bushes were already past their peak, but others were still budding. There should be several more weeks of good viewing and there is also a fall season (late October into early November).


Other Things to See

The amusement park for children operated by the Arakawa Ward is closed for refurbishment and will not reopen until sometime in 2022.

Adjacent to the tram maintenance and storage facility at Arakawa Shako-mae station, several streetcars from the once expansive Tokyo network are on display. On weekends and holidays, it is possible to go inside these streetcars.

A shop (Toden Monaka) near the Kajiwara tram stop sells traditional Japanese confections (wagashi) made on premise, including some with a tram theme.

The section of the line with the best display of roses begins at Arakawa Shako-mae (three stops east of Oji) and continues for several kilometers to Arakawa Yuenchi-mae.

Tram stops all have slopes and the trams all have wheelchair spaces. The best rose viewing area is perfectly flat. There is a wheelchair accessible toilet near the Arakawa Yuenchi-mae stop.

One of the many pleasures of living in Tokyo is discovering beauty in unexpected places. While walking or cycling, I frequently come upon small but striking flowers being grown curbside or in tiny gardens in the most mundane, even drab, neighborhoods.

Few people would think of tram tracks through a part of Tokyo once known for its gritty neighborhood metal plating factories as the locus of an extended, flourishing rose garden, but that is what makes Tokyo the city it is.