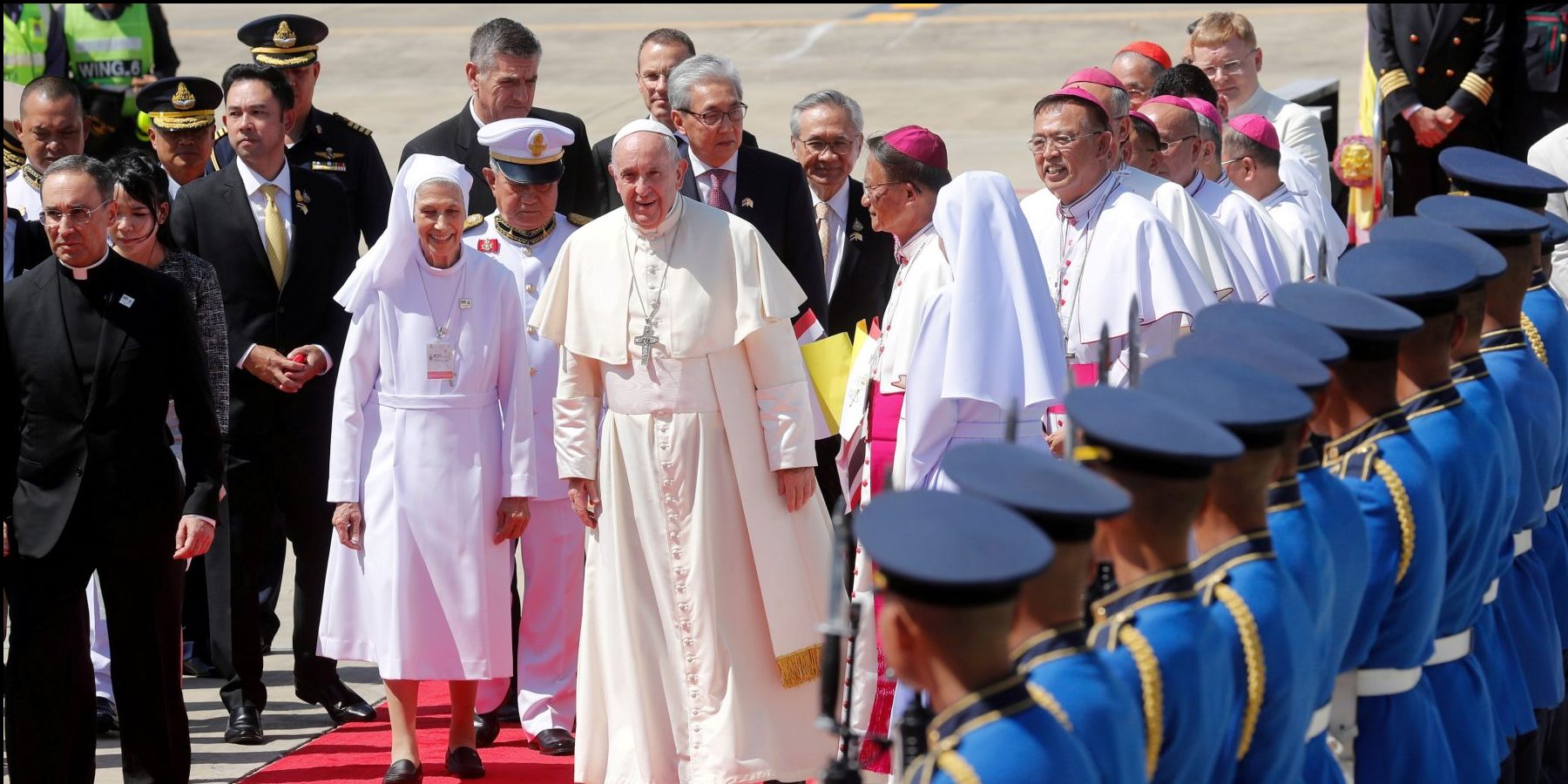 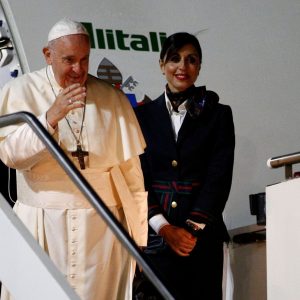 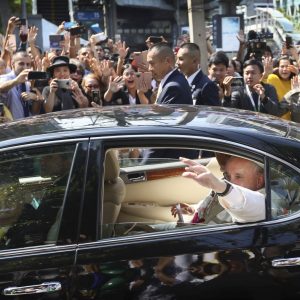 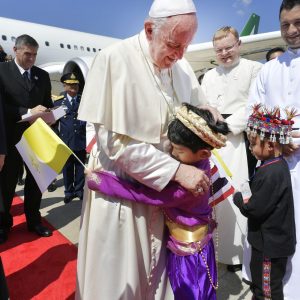 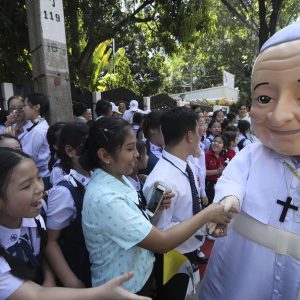 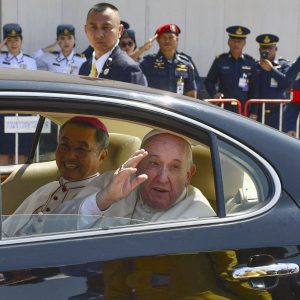 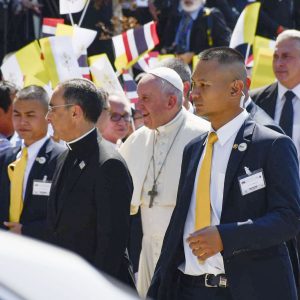 Francis, the 266th Pope of the Roman Catholic Church, is set to land on the Japanese archipelago on Saturday evening, November 23. He will be visiting Nagasaki, Hiroshima, and Tokyo until the morning of November 26.

The first part of his trip will take place in Western Japan, including the only two cities where atomic bombs have ever been dropped on civilian populations: Nagasaki and Hiroshima.

The theme of the visit is “Protect All Life.” In a video message released on November 18, Pope Francis explained the theme as “the strong instinct which resides in the hearts of people to defend the dignity of all humans, which is particularly at risk with threats to peaceful coexistence.”

This is the fourth papal trip to Asia since Francis, once known as Jorge Mario Bergoglio, became head of the Catholic Church in March 2013. He visited South Korea in 2014, Sri Lanka and the Philippines in 2015, and Bangladesh and Myanmar in 2017. As of posting, the Pope is visiting Thailand from November 20-23, before heading for Japan.

This marks only the second time a pope will have visited Japan. The first was when Pope John Paul II landed in Japan on February 23, 1981.

Despite the fact that both Thailand and Japan are countries with relatively small Christian communities — less than 1% of the population — papal visit highlights the generally growing trend of the faith in regions like Asia, and even Africa.

According to figures released by the Vatican, believers in Asia increased by 12.2% between 2010 and 2017. In Europe, the trend seems to be going the other way. A 2017 Pew Institute report noted that church attendees in Italy had dropped sharply to about 40%. This is in a country that is home to the Vatican and historically overwhelmingly Catholic. The figure goes drastically lower in other countries, with church attendance in Denmark and Finland as low as 9%.

The Agenda in Japan

For some time, Pope Francis has expressed interest in visiting the land of the cherry blossoms. He has even said he wanted to come to Japan as a missionary when he was young, and hinted at this image in his pre-departure video message.

An issue set to be a central during this visit is nuclear disarmament. Pope Francis is the first pope in history to holistically condemn not just the use, but also the possession, of nuclear arms. In the same video message for the Japanese prior to this trip, Francis said:

Your country is particularly aware of the suffering caused by war. I pray together with you that the destruction caused by nuclear weapons doesn’t occur again in human history.

He concluded with the thought that “using nuclear armaments is immoral.”

Pope Francis was seen by some as working the ground for a Japan visit in an unusual move at the end of 2017, when he asked that postcards featuring a famous picture of Nagasaki after the August 1945 atomic bomb be distributed in Vatican City.

The postcards, titled “the fruit of war,” shows a boy queuing to cremate his younger brother who is strapped to his back. The Archbishop of Nagasaki, Mitsuaki Takami, commented on the possible reason for the gesture in an official press release, saying: “I suppose the Pope’s words and actions implied his wish for this visit.”

To give some context of the history of Catholicism in Japan, the first contact with Christianity came in 1549 through Francisco Xavier, who was part of the same order as Pope Francis. This was followed by a long history of repression and official banning of the Catholic religion in the 17th century.

As a consequence of the harsh repression, Hidden Christians, as they were commonly known, developed unique ways of preserving their faith. It is a story which has recently become better known abroad, thanks to the film rendition of Silence, the novel by Endo Shusaku, by the great director Martin Scorsese.

Events in Nagasaki and Hiroshima

Pope Francis is set to arrive on the morning of November 24 in Nagasaki, a place with a long history of Catholics and nuclear arms. It also has the largest Catholic population in Japan.

He is set to deliver a message on nuclear weapons at the Nagasaki Hypocenter Park, near the 6.6-meter monument commemorating the atomic bombing, at 10 A.M. that day.

The site is particularly significant. When the atomic bomb was dropped in 1945 and the Catholic Urakami Cathedral was destroyed, an estimated 8,500 died — half of the Catholic community, which had struggled through so many years of repression. The photographer of the young boy in Nagasaki in 1945, Joseph Roger O’Donnell, is expected to attend the ceremony.

The Pope’s address will be followed by a courtesy visit to the 26 Martyrs of Japan Memorial, located in Nishizaka Park, which commemorates the Catholics who died in a wave of persecutions in 1597.

After lunch, Pope Francis is set to conduct a mass at the Nagasaki Prefectural Baseball Stadium in front of an audience expected to exceed 30,000 people. Symbolic of the history of Catholicism in Nagasaki, a statue of the Virgin Mary, which was found in the rubble of Urakami Cathedral in 1945, will also be displayed.

In the afternoon of November 24, the Pope will fly to Hiroshima, which suffered the destruction of an atomic bomb on August 6, 1945.

He will meet some of the victims of the disaster that evening at a “Gathering for Peace” event at Hiroshima Peace Memorial Park, the location of the infamous Genbaku Dome, at around 6:45 P.M.

Wrapping up his visit to Western Japan, the Pope is expected to meet Buddhist and Shinto leaders in a display of religious tolerance, before he departs from Hiroshima to Tokyo in the evening.

“The Maturity of Faith”: An Interview with Martin Scorsese