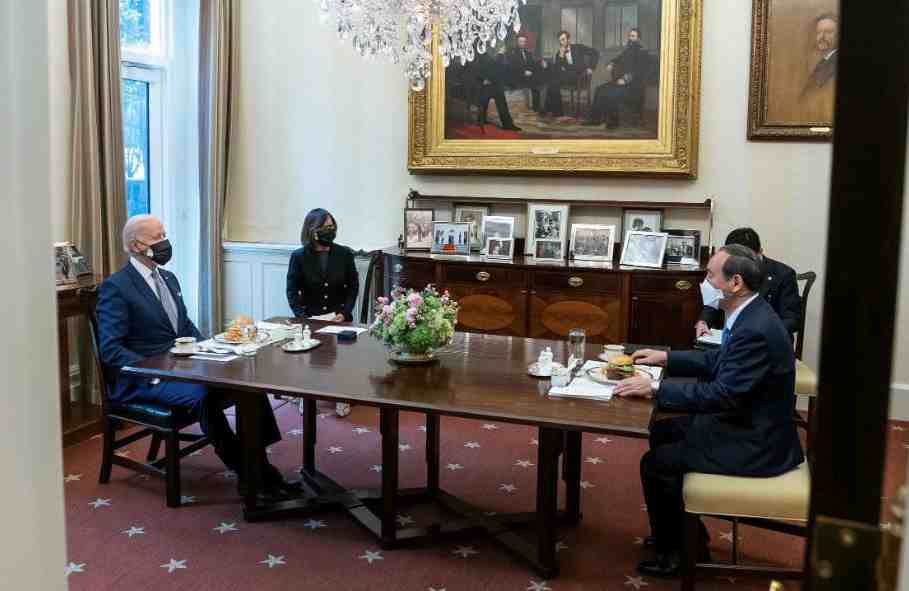 Japanese Prime Minister Yoshihide Suga arrived at the White House for a summit meeting with U.S. President Joe Biden on the afternoon of April 16 (Washington time), clad in a blue suit like that of the President, along with an azure-blue tie and “blue ribbon” badge. It is the same attire Mr. Suga wore on April 1, 2019 when as Chief Cabinet Secretary he announced the name of the new Japanese era, Reiwa.

Blue is the symbolic color of the movement to rescue the Japanese victims abducted by North Korea. The Prime Minister later poured out his feelings, saying that he wanted his attire to “express my sincere desire for bringing home the abductees.”

In the summit talks, the Prime Minister expressed the urgent need for resolution of the abduction issue. Senior Biden administration officials present at the summit were all wearing blue ribbon badges– including the President’s national security adviser Jake Sullivan and NSC Indo-Pacific coordinator Kurt Campbell, a demonstration that the Prime Minister’s zeal for solving the abduction issue has been adequately conveyed to the U.S. government.

This was the sole issue on which Prime Minister Suga made a special gesture at the meeting. Otherwise, he remained steady and calm, as is his usual demeanor, which is what he told his aides he intended to do prior to arriving at the White House.

When part of his meeting with President Biden and talks with Vice President Kamala Harris were opened to the media, the Prime Minister did not wear a smile, simply riveting his eyes on his counterpart, even when their gestures were animated.

In keeping with his usual character, Mr. Suga’s preference for avoiding performance politics contrasted sharply with some other Japanese politicians, who become uncharacteristically friendly when speaking with senior foreign officials.

Mr. Suga behaved in his usual manner as well when dining with his U.S. counterparts, absorbing himself in the discussion while hardly eating or drinking.

In the in-person meeting with President Biden accompanied only by an interpreter, Mr. Suga hardly touched the hamburger he was served. Enthusiastically engaged in the discussion of such topics as family backgrounds and episodes during Mr. Biden’s visit to Sendai while he was vice president following the Great East Japan Earthquake of 2011, the Prime Minister ended up explaining, “the time was insufficient” to eat during the conversation.

The Prime Minister seems confident in the personal relationship of mutual trust he is building with President Biden.

Neither has any relatives who were strong politicians. After the summit, the Prime Minister told accompanying reporters, “I had thought that Mr. Biden and I might have some similarities with each other, and I now think Mr. Biden feels that, too.”  He added, “The two of us have many things in common, such as being politicians who came up from the ranks.” Mr. Biden touched on their relationship at the outset of the joint news conference following the summit, saying, “There’s no substitute for face-to-face discussions.”

The friendship they have developed was also evident at the press conference, with the two addressing each other on a first name basisー the President calling Mr. Suga “Yoshi” and the Prime Minister referring to the President as “Joe”. Then, they comfortably tapped each other on the shoulder as they returned to the Oval Office after the news conference.