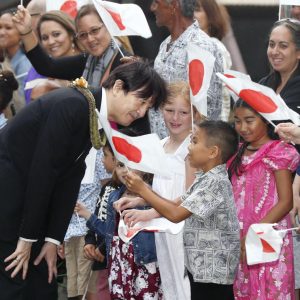 Japan’s Prince Akishino and his wife Kiko made a week-long official visit to Hawaii early in June, starting with an offering of a wreath at the National Cemetery of the Pacific, the resting place for over 25,000 American war victims. This was followed by a trip to the Ehime Maru memorial, dedicated to the Japanese lives lost in the 2001 collision between a Japanese ship and United States submarine.
The couple later planted a tree at a downtown Honolulu park, visited the Japanese Cultural Center, and attended a dinner hosted by Governor David Ige.
But for Prince Akishino, second son of the Japanese emperor, the highlight of their visit to Hawaii was the 59th Convention of Nikkei and Japanese Abroad, a celebration commemorating the 150th anniversary of the arrival of the first Japanese immigrants to Hawaii. On June 6, the Prince gave the opening remarks to the large audience of Japanese Hawaiians and ethnic Japanese from many other parts of the world, praising their valuable roles in local communities.
It has been 150 years since Japanese began emigrating abroad in the modern era, and their first destination was Hawaii. In 1868, the year when Emperor Meiji ascended the throne, a group of 149 Japanese arrived in Hawaii to work as contract laborers at sugar plantations. They are known as Gannenmono, or “people of the first year of Meiji.”
After their three-year contracts ended, a third of them returned to Japan, and another third moved on to the U.S. continent. The remainder, about 50 men, settled in Hawaii and married local women. The Gannenmono’s diligence and assimilation impressed King Kalakaua (reign 1874-1891), the second to the last monarch of the kingdom of Hawaii.
In 1881, King Kalakaua visited Japan as part of his world tour and met with Emperor Meiji. The Hawaiian monarch suggested an alliance between the two countries and requested additional Japanese workers to be sent to his kingdom. In response, as many as 180,000 Japanese arrived in Hawaii and labored at sugar plantations between 1885 and 1924, and approximately 39,000 of them settled there. Many of them married picture brides from Japan and raised families in Hawaii, by then already a U.S. territory.
Japanese immigrants and their descendants increased to become the largest single ethnic group in Hawaii, constituting as much as 40% of the Hawaiian population in the early decades of the 20th century. Japanese Americans living on the West Coast were incarcerated in internment camps during the Pacific War, an experience that naturally left many with some sense of psychological distance from Japan. But, especially among Japanese Americans in Hawaii, warm feelings for their ancestral land lived on.
In 1959, when Crown Prince Akihito, now the Emperor, married his wife, now Empress Michiko, a second-generation Japanese American businessman in Honolulu was inspired to raise funds to establish a scholarship for student exchange in their honor. When he proposed to name this scholarship the Crown Prince Akihito Scholarship, Japan’s Imperial Household fully approved, and the Crown Prince himself contributed to the fund.
Since the 1970s, this scholarship program has benefited both Japanese and U.S. graduate students studying subjects related to the U.S. and Japan at the University of Hawaii. The scholarship’s 40th and 50th anniversary celebrations were graced by royal family visits to Hawaii, including the emperor’s daughter Princess Sayako in 1999 and the Emperor and Empress in 2009. Prince Akishino and Princess Kiko also met the scholarship recipients and foundation trustees on June 5, their second day in Honolulu.
Japanese immigrants and their descendants no longer make up the largest ethnic group in Hawaii, but they continue to play active roles in their communities and give a warm Aloha to visitors from Japan.
Prince Akishino and Princess Kiko’s visit reaffirmed Japan’s close ties with the people of Hawaii and the special place Hawaii has held for the people of Japan since 1868.
Related Topics:collision with a U.S. submarineCrown Prince AkihitoEhime MaruEmperor MeijiGannenmonoHawaiiHonolulu parkJapanese AmericansJapanese immigrants to HawaiiKing KalakauaNational Cemetery of the PacificPrince AkishinoPrincess KikoPrincess SayakoUniversity of Hawaii