Remembering the Korean War: Japanese Blood Was Shed in the Defense of South Korea 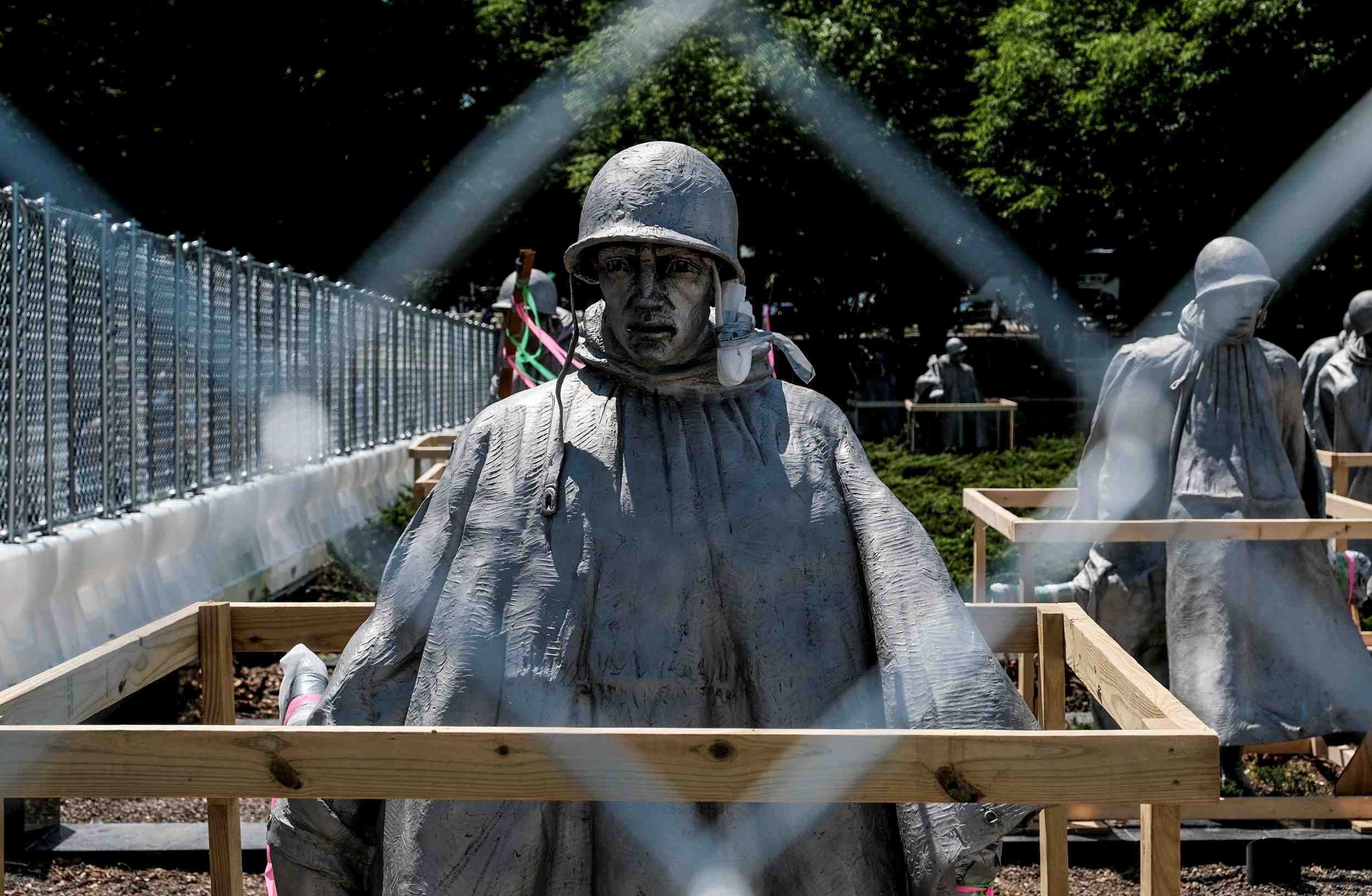 A statue of a soldier is seen through a fence at the Korean War Memorial to honor the lives of service members who were killed in action in remembrance of Memorial Day in Washington, U.S., May 31, 2021. Japanese service members died alongside Americans in defense of Korea. REUTERS/Michael A. McCoy

The Korean War started on June 25, 1950. United Nations (UN) Forces were forced to retreat into the Pusan perimeter and in dire straits until the Inchon landing on September 15, 1950. This caused the North Koreans to make a hasty retreat back to the North.

Ask anyone to name the countries that joined the United States in the Korean conflict, and the reply would include numerous nations. In fact, 21 U.N. member states participated. Sixteen members provided fighting units and five others sent medical hospitals. Japan was not a U.N. member then, and was only remembered for making a lot of money during that war.

While the Japanese economy did receive a tremendous boost, Japan was not just a bystander during that war. It allowed U.S. troops to use over a dozen airfields, 10 seaports, 14 hospitals, and numerous Army bases. Japanese transport ships were directly involved in the ferrying of U.S. troops and supplies to Korea. In addition, over a hundred motorized small vessels were sent to Pusan (Busan) as lighters, carrying troops and supplies from large ships to shore.

In November 1950, when the U.S. Army tugboat (LT-636) hit a mine, 22 of the 27 Japanese among the crew were killed. An exact count of Japanese directly involved in the Korean War is not available.


The Crucial Role of Japan’s Minesweepers

Not widely known is that Japan sent minesweepers and crews into actual combat to assist the limited number of available U.S. minesweepers during the first six months of that war. Over 1,000 crewmembers from Japan’s Maritime Safety Agency, with over 40 minesweepers, in addition to a couple of trial ships (ships that re-check areas cleared of mines) and some patrol boats, were involved in combat operations clearing mines in Korean ports. This was clearly in violation of the Constitution of Japan adopted shortly after the end of World War II, and therefore not publicized.

RELATED: Japanese ‘Pacifism’: Huh?, and BOOK REVIEW | ‘Friendship Across the Seas: The U.S. Navy and the Japanese Maritime Self-Defense Force’ by Agawa Naoyuki

In 1950, Japan had over 80 minesweepers and trial ships engaged in clearing mines which had been emplaced around Japan during WWII. During the Okinawa campaign, the U.S. had deployed over 100 minesweepers and assist ships. However, by then most had been deactivated.

When the Korean War broke out, the U.S. had one operational minesweeper and some support ships in the Japan area, primarily to observe Japanese minesweeping activities. South Korea had a few minesweepers, but the ships were not properly equipped, nor did they have trained crews.

In December 1950, Japanese minesweeper MS-152 ran aground at Hungnam, and was salvaged. There were no fatalities.

By the end of 1950, U.S. minesweepers were available in sufficient numbers and most Japanese minesweeping involvement ended.

The employment of minesweepers and engaging in combat was conducted with the acknowledgement and approval of the Japanese government. While it may have been politically sensitive at the time, it is long past due for those Japanese who engaged in combat during the Korean War to be properly recognized and honored.

This is especially so for Sakataro Nakatani, the crewman who was killed when his minesweeper was sunk at Wonsan, and other Japanese nationals who died in that war. Japan’s participation in the Korean War is not a secret and there is no need to keep it hidden from the public.

This mention of Japan’s minesweepers in the Korean War is to clarify history and to let the Korean people know that Japan is not an enemy. Indeed, Japanese blood was shed in the defense of South Korea.

Japan’s involvement in the Korean War has not been treated fairly by most historians. Very few make mention of Japan being an active participant in combat during a very crucial moment during the Korean War.

Also, often overlooked is the importance of Japan’s location, and the support it provided to U.N. forces. While many nations, especially Great Britain and others, provided combat troops, there is little doubt South Korea would not have survived without the involvement of the United States, which relied heavily on Japan’s support.

What needs to be clearly understood is that without Japan, the U.N. effort in that war would have been severely curtailed. Even more important than minesweepers, the use of Japan’s bases and its logistical support were essential for U.N. forces. Overlooking this crucial factor could lead to serious miscalculations in planning for the security of South Korea today.

The potential for a calamity in South Korea is high. War with North Korea is still within the realm of possibility and, even without warfare, there is also a high likelihood of the nightmare of millions of starving North Koreans coming across the border becoming a reality.

There is a tendency to accept U.S. support of Korea as a given, without recognizing that much of that support relies heavily on Japan’s cooperation. In the early 1960’s, there was a large demonstration in Tokyo opposing Japan’s involvement in America’s wars.

Public opinion in Japan does matter. Before Park Geun-hye’s presidency a few years ago, all things Korean were at the height of popularity in Japan. Since then, due to unceasing anti-Japan tirades by South Korea, almost 50% of the Japanese population no longer trust South Korea.

Not only that, over 80% of South Koreans are anti-Japanese. Fortunately, Korean attitudes toward Japan appear to be improving among the younger generation, and hopefully this trend will continue.

In Japan, Korean cosmetics and K-Pop are enjoying high popularity, and there is a resurgence of the popularity of South Korean TV Soaps, especially among the younger crowd.

This article was written to point out the vital role Japan performed in the Korean War, and the U.S. reliance on Japan’s support, to assure the security of South Korea.

Unfortunately, the South Korean government finds that inciting hatred against Japan serves as a useful tool for uniting the Korean people and gaining public political support. That is unfortunate, because after treaties and agreements between Korea and Japan that supposedly settled all issues, it seems that nothing has been settled.

What is important for Koreans to understand is that, after all these years, it appears Japan has finally come to the realization that efforts to attain amicable relations with South Korea are futile. No further apologies or concessions can be expected from Japan.

The future of Korea-Japan relationship will be up to Korea to decide. Hopefully, the next Korean president will not use anti-Japan sentiment as a tool for gaining public support and make decisions based on concern for Korean national security and interests.

Author: Archie Miyamoto
Find other articles by the author, including those related to the history of the Pacific War and Korean War, at this link.