Forest Bathing With Elephants At Lake Nojiri’s ‘Zo No Komichi’ 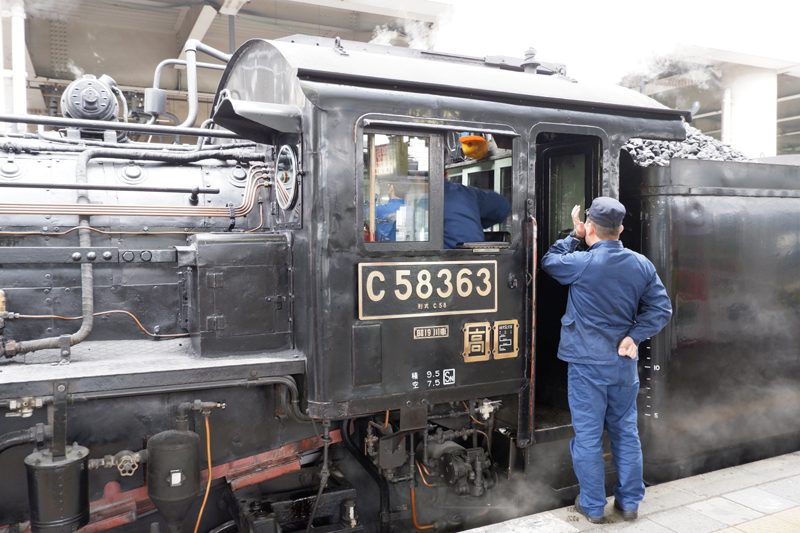 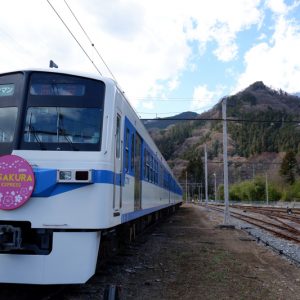 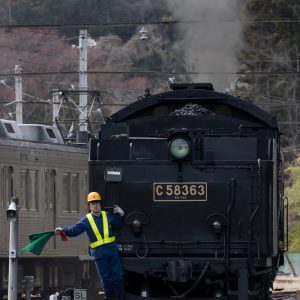 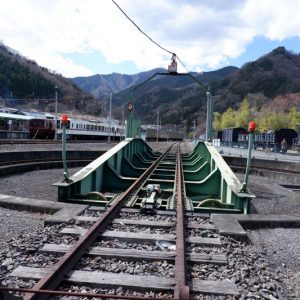 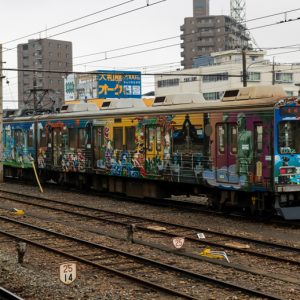 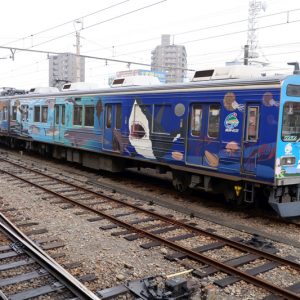 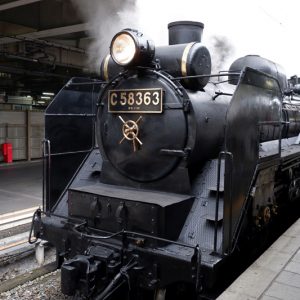 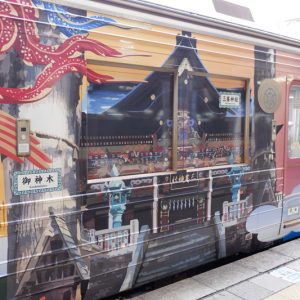 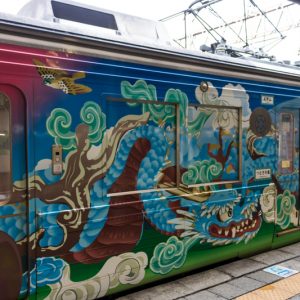 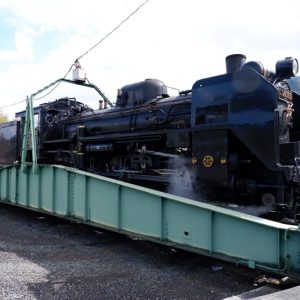 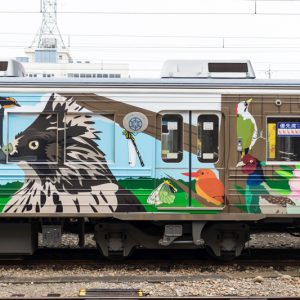 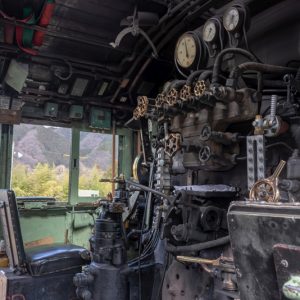 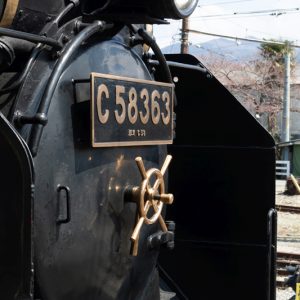 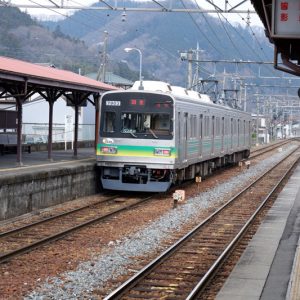 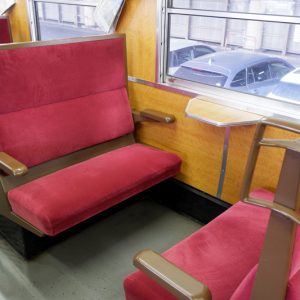 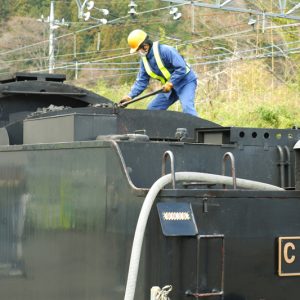 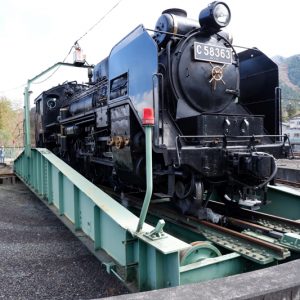 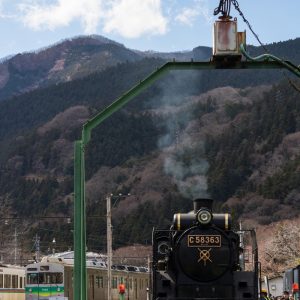 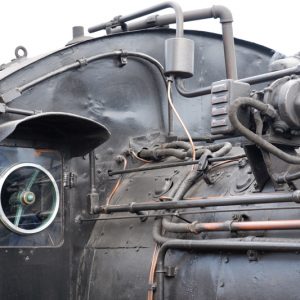 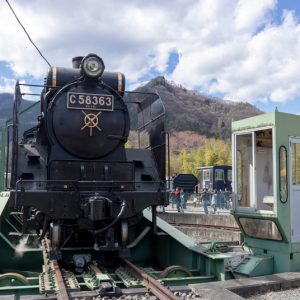 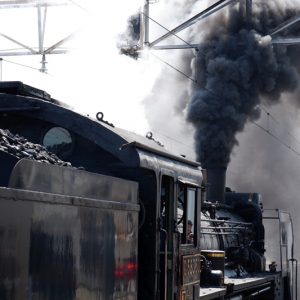 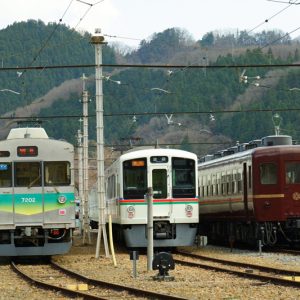 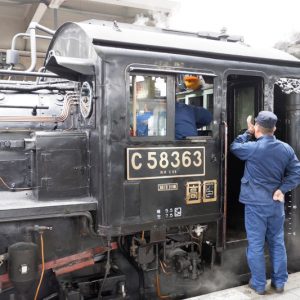 On March 31, I and my older son took a day trip on the Paleo Express, a steam train operated by the Chichibu Railroad between Kumagaya and Mitsumineguchi in Saitama Prefecture, northwest of Tokyo.

The name of the train comes from that of a dinosaur that inhabited the area millions of years ago. We made our trip in the company of Japanese of all ages, from toddlers to the quite elderly, and a large number of foreign tourists, both European and Asian.

The Allure of the Steam Engine

The mix of riders is testimony to the fascination that steam engines hold for people irrespective of age, nationality, or gender. Even when it is not moving, a steam engine seems like something that is alive rather than being simply a piece of machinery.

Just standing still, a steam engine under fire inhales, exhales, spits, and makes various sounds such that it seems like an animal that is anxious to get moving. When the whistle is blown and smoke pours from it stack, the sense of the engine being alive is heightened.

Further testimony to the interest in steam trains in Japan is the number of people who turn out to view or photograph any steam train run. Even though the Paleo Express runs at least twice a week for much of the year, all along the route there were clusters of people waving to the train from nearby streets and fields. Others had elaborate camera setups with as many as three cameras on tripods.

When a steam train is run on a line that does not have a regular steam service, the crowds can be enormous. On a one-off steam run to Choshi in Chiba some years ago, there were throngs along the road and in fields along the route such that extra police and hired security guards were needed to prevent accidents.

The engine used by the Chichibu Railroad is a C58 model manufactured in 1944. It was used primarily to haul freight trains in the Tohoku (Northeast) Region of Japan. It had travelled more than one million kilometers when it was retired in 1972.

After a stint in an elementary school yard (numerous decommissioned steam engines can be found in school yards and parks for children in Japan), C58363 was laboriously restored and began service on the Chichibu Railroad in 1988.

The passenger coaches are more modern, being of a design that was produced between 1969 and 1978. They are comfortable and provide modern amenities. There is onboard food and beverage service, as well as the opportunity to purchase various souvenirs with the Paleo Express logo.

Started as a Freight Train

The Chichibu Railroad itself is something of an anachronism. Running from Kiryu to Kumagaya, and then to Mitsumineguchi via the city of Chichibu, it is one of the few surviving private railroads that still has a significant freight operation.

Many regional private railroads in Japan were originally freight only, constructed to serve a particular mine, factory, or port. Most of these have disappeared, either because their raison d’etre has ceased operation or because of a shift to road haulage. Others that had extensive freight operations, such as the Seibu and Tobu lines around Tokyo, no longer carry freight and are exclusively passenger and commuter operations.

In the case of the Chichibu Railroad, it came into being primarily because the Chichibu area has several mountains that are almost entirely composed of limestone that is ideal for making cement. Shortly after passing Ohanabatake Station on its way to Mitsumineguchi, the on-board guide points out the quarrying operations on nearby Mt. Buko that are still going on, and notes the role of Chichibu cement in the modernization of Japan. The Taiheiyo Cement Company is the largest stockholder in the Chichibu Railroad with another mining company in second place.

Along its route the Paleo Express passes by several large cement factories. The Seibu Chichibu Line that connects with the Chichibu Line at Ohanabatake was also built to haul cement, although this carriage ceased some years ago.

A consequence of the Chichibu Railroad being started and continuing as a freight operation is that large stretches of the route between Kumagaya and Mitsumineguchi are not at all scenic. Even where the route is not passing through industrial areas, it goes through generic suburbia. For this reason, unless one wants to see the train being fired up at Kumagaya, I would suggest picking up the train at one of its intermediate stops and going only as far Mitsumineguchi or one of the well-known scenic sites note below.

There is really not much of interest in Mitsumineguchi itself. The railroad went to this location primarily to serve an industrial site. The station itself serves an average of less than 800 passengers per day. While there are several very impressive temples and shrines within a 10-kilometer radius of the station, the schedule for the steam train does not allow enough time for visits to these sites, followed by a return on the steam train. It is possible, however, to return to central Tokyo using one of the electric commuter trains that originates in Mitsumineguchi.

Slipping Into History with the Steam Engine Turntable

Train buffs, however, do have an incentive to carry on to Mitsumineguchi and many people on our train did so.

Mitsumineguchi has something quite unusual even among those railroad companies that operate steam excursion trains: a fully working turntable for reversing the engine. Aside from the actual reversing, the approaching to the turntable provides an opportunity to photograph the engine under steam and in motion with dramatic puffs of smoke and steam and frequent sounding of the very distinctive steam whistle.

Further photo opportunities are provided by the refueling process that involves the trainmen shoveling a ton of coal by hand and doing other maintenance tasks that are necessary for steam engines but not for electric trains.

There is also a display of decommissioned freight and passenger cars.  The former are open to the public while the passenger cars are seriously dilapidated and fenced off.

Even without the steam train, the Chichibu Railroad itself is something of a working museum. All of its electric commuter trains are hand-me-downs from other railroads, especially the Tokyu Company that operates between Shibuya and Sakuragicho in Yokohama. Many of these commuter trains are “wrapped,” meaning that they are entirely covered in advertisements.

How the Paleo Express Stands Out

Having a working turntable at Mitsumineguchi is almost certainly one of the reasons the Paleo Express is different from other steam excursion trains in Japan.

The Paleo Express operates without the assistance of a diesel or electric freight engine. Without a turntable, a steam train would have to operate with the engine either pushing or running backward on one leg of a roundtrip, something that is neither safe nor technically viable. Hence the use of a diesel or electric freight engine to be at the head end of most steam trains in one direction, usually the return leg.

The other reason the Paleo Express is different, as explained to me by a trainman at the Oigawa Railroad in Shizuoka, is that the steam engines that have survived are antiques and lack the power to pull more than a few carriages. Stressing the engines leads to breakdowns and parts often have to be handmade since it has been decades since any manufacturer produced the engine models now being used for steam train excursions.  The Paleo Express itself was out of action for some weeks in the fall of 2018. Fortunately, the problem was not severe and the engine returned to service much more rapidly than originally anticipated.

Riding the Paleo Express, one definitely gets the sense that the engine is very much an antique. At its fastest, the train is probably moving no more than 20 km hour. At some points, it is moving no faster than the people walking along the streets that parallel the tracks.

The slow pace and the rather mundane scenery between Kumagaya and Yorii is another reason for suggesting Yorii rather than Kumagaya as the starting point.

Overall, while I and my son much enjoyed the trip, we both came to the conclusion that the Kumagaya-Yorii portion is best skipped. And, for many people, doing only one leg of the journey on the Paleo Express may be preferable to doing a full round trip on the steam train.

Using the steam train only one way allows more time for sightseeing at one of the many noted sites along the route. These include  Hitsuji-yama Koen (Hitsuji Mountain Park) noted for its Shibazakura no Oka (Hill of Phlox), and Nagatoro known for its “white water” rafting on the Nagatoro River. A general guide to the many attractions and festivals of the Chichibu area may be found here.

There are three major connection points to the Paleo Express: Kumagaya, Yorii, and Hanabatake.

Kumagaya is a Shinkansen stop. The trip takes 38 minutes from Tokyo Station and costs ￥3,190 JPY. Using the Ueno-Tokyo Line costs ￥1,144 JPY and takes one hour and 11 minutes.

Using the Tobu Tojo Line from Ikebukuro to Yorii costs ￥885 JPY and takes one hour and 19 minutes to one hour and 34 minutes, depending on the type of service.

Using the Seibu Ikebukuro Line to Ohanabatake Station near the Chichibu Railroad’s Chichibu Station costs only ￥772 JPY. However, it requires one hour and 28 minutes to one hour and 54 minutes, depending on the service.

The main attraction of the Seibu Line route is that between Hanno (site of the MoominValley Park) and Chichibu (Ohanabatake), the train moves slowly along a very scenic winding route through the Iruma river valley.

You must book through a JR Midori-no-madoguchi or travel center. You must make it clear that you want to book for the steam train and are not seeking Chichibu Railroad commuter tickets, which JR does not handle.

Further, JR handles only the reserved seating tickets, not the basic transport ticket. You have to get that from the Chichibu Railroad station where you plan on boarding the steam train. The ticketing system is primitive at best and there are complaints about it in Japanese language travel sites.

There is a system of “place holding tickets” (整理券) that cost ￥510 JPY for non-reserved seating. Telephone and online booking is available for these tickets, with abbreviated instructions in English here. These “place holding tickets” do not in fact guarantee a seat, but unless there is some event at one of the stops on the route, you will probably get a seat. If you do not, you can always take one of the electric commuter trains. These are reasonably frequent.

Ticket prices depend on what segment of the line you use. Since we traveled the entire steam train route, our reserved seat tickets cost ￥720  JPY for each leg, or ￥1,440 JPY total.

As noted above, you must buy a separate basic ticket 乗車券 for transportation on the Chichibu Line itself. We bought one-day passes that allow unlimited use of the line for a single day. These were ￥1,440 JPY per person. This offers a small discount over the regular ticket price. Regular point-to-point tickets would be more economical for those riding only a segment of the line.

Overall, we both had an enjoyable day. We are looking forward to returning to the Chichibu area to further explore its many scenic and historical attractions, and possibly for some serious hiking in the mountains.