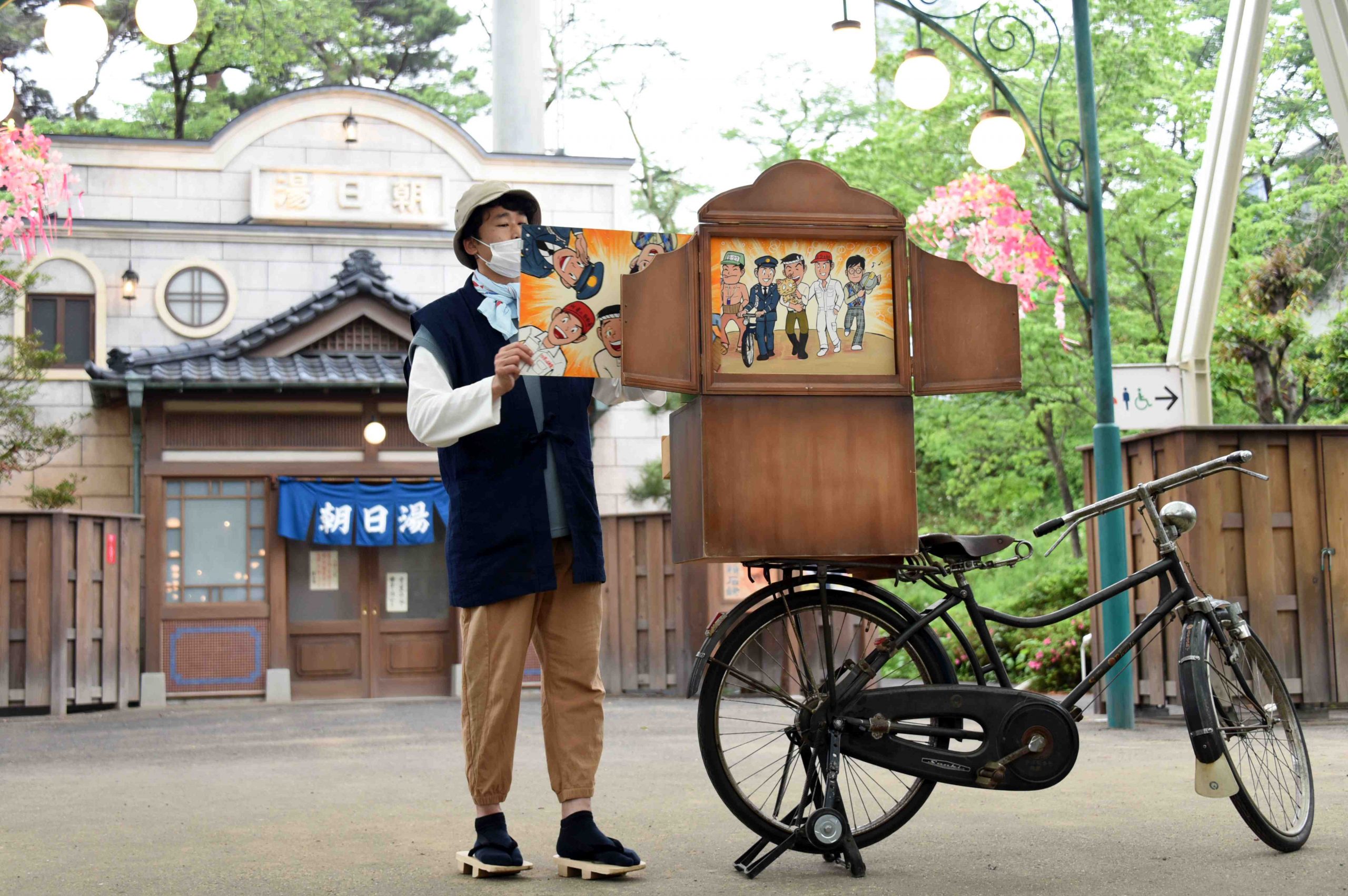 Seibuen Amusement Park in Tokorozawa, Saitama Prefecture, reopened on May 19 after large-scale renovations. The transformed park has attracted more visitors than expected with its Showa era townscape theme, a throwback to a time of rapid economic growth in Japan, and the world’s first attraction based on the iconic kaijū (monster) film, Godzilla.

Seibuen teamed up with Katana, a marketing firm based in Osaka and led by Tsuyoshi Morioka, for the makeover project. Katana had played a vital role in leading the Osaka theme park Universal Studios Japan (USJ) to a V-shaped recovery.

The journey into the world of Showa-era Japan begins the moment visitors alight at the Seibu-Yūenchi Station on the Yamaguchi Line of Seibu Railway. A retro streetcar at the entrance lures visitors into a nostalgic wonderland.

Once inside the amusement park, a reproduction of a shotengai (shopping street) typical of the Showa era called “Sunset Hill Shopping Street” introduces visitors to daily life back in the day. A greengrocer selling bananas with plenty of yelling and dramatic slashing of prices, police officers chasing a thief, and other feverish live performances generate the quintessential Showa atmosphere.

Visitors can also eat spaghetti napolitan, a popular yōshoku dish (Western-influenced Japanese cuisine), and buy souvenirs using “Seibuen currency,” which recreates the prices of the time. The park has plenty of tricks up its sleeve.

Another major attraction is “Godzilla the Ride,” featuring one of the greatest monsters of the Showa era. The ride is set in a movie theater on a small hill, from which visitors embark on a thrilling ride on special armored cars, maneuvering through fierce battles between Godzilla and monsters like King Ghidorah in a narrow escape.

The upgraded park has got off to a good start. A staff member explained, “The number of visitors exceeded our expectations within two weeks of opening, mainly among our target market, which includes families and young women who like theme parks.”

Seibuen Amusement Park opened in 1950. It was focused at the time on setting up attractions such as a giant Ferris wheel and roller coasters, boosting the park’s popularity to about 1.94 million visitors in 1988. However, diversification of the leisure industry and the aging of the park’s facilities caused numbers to plummet to about 380,000 in 2019.

It was during this time that Seibu Holdings decided to give the park a facelift worth ￥10 billion JPY (about $91 million USD) to coincide with its 70th anniversary, choosing Tsuyoshi Morioka’s company Katana as its partner.

Morioka is a highly skilled marketer who led the construction of the once-ailing Universal Studios Japan. He boldly announced innovative plans, such as a new themed area based on the popular film series Harry Potter and a backward-moving roller coaster, ultimately boosting visitor numbers from less than 8 million in 2010 to about 13.9 million in 2015.

In 2014, I covered the opening of the Harry Potter-themed area at USJ. I will never forget the sight of staff crying, overcome with emotion. At that time, USJ had been the superstar of the Kansai business world. It had achieved a series of successes with innovative concepts despite concerns about Kansai’s sinking economy.

President Takashi Goto of Seibu Holdings explained his choice of partner. “By ourselves, we could only come up with ideas like adding thrill rides. But Mr. Morioka has knowledge and passion for marketing, so I wanted to entrust him with this project.”


Finding Happiness Amid the Pandemic

Morioka, the mastermind behind USJ’s revival, has once again demonstrated his genius by giving Seibuen Amusement Park a makeover. The buzz of those days is back!

He knew exactly what the park needed for a comeback: “The common denominator among amusement parks that struggle to attract customers is that they lack a ‘face.’ I wanted to make Seibuen Amusement Park a place where people can find happiness.”

Morioka’s vision was adopted, and the nostalgic Showa era theme was chosen to give visitors “heart-warming happiness.”

But the coronavirus pandemic presents an increasing challenge.

President Goto hopes that visitors will find happiness at Seibuen Amusement Park, because “people yearn for more heartfelt experiences than ever before” due to the pandemic. Still, attracting visitors while also preventing the spread of the virus is going to be a complex challenge.

It will be interesting to see whether Seibuen will experience a V-shaped recovery like that of USJ under these circumstances.

The marketing firm was established in 2009 by Tsuyoshi Morioka, who served as the head of the marketing division at the operating company of USJ and also led the theme park’s large-scale construction. Katana aims to build corporate brands through marketing know-how, including unique strategic theories using higher mathematics. His firm has garnered attention for its ongoing theme park project in Okinawa, which Morioka was unable to complete during his time at USJ.