Shinzo Abe Vows to Share Coronavirus Vaccine to the World, As Japan Lifts State of Emergency 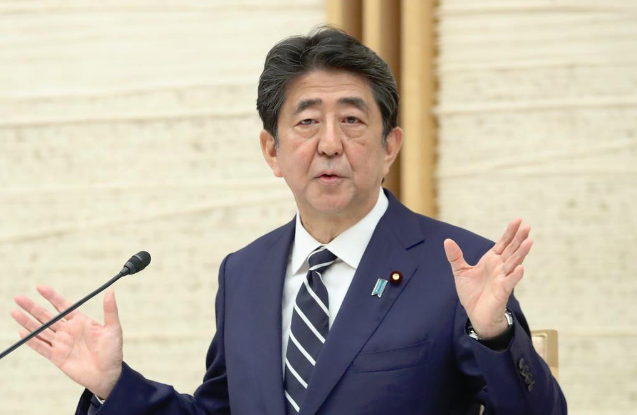 Prime Minister Shinzo Abe announced on Monday evening, May 25, the lifting of the state of emergency in Tokyo and the remaining prefectures, crediting “the strength of the Japan model” for slowing down the spread of the novel coronavirus.

In a press conference, Prime Minister Abe explained the reasons for lifting the emergency earlier than intended, and what steps should be taken by citizens to avoid reigniting the spread of the virus.

The precautionary measures of social distancing — such as implementing telework and reduced economic activity — had kept many around the country indoors for the better part of two months starting in early April.

The Prime Minister took a moment to appreciate that Japan had fared well in the crisis, with relatively low numbers of infections and deaths from the coronavirus compared to other countries.

“In Europe and the U.S., there was an explosion in some cases. In Japan, we have almost managed to eradicate the spread of the virus in a month and a half. We showed the strength of the Japan model,” Abe said.

Why Not Wait for Declaration to Expire?

On May 21, the Prime Minister stopped short of releasing all prefectures from the state of emergency. He lifted the declaration for most of Japan’s 47 prefectures, but not for Tokyo, Kanagawa, Saitama, Chiba, and Hokkaido. In these areas, the number of new infections in the preceding seven days had not gone down to 0.5 patients per 100,000 people — a criterion established by the expert panel advising the government on policy towards COVID-19.

Tokyo Governor Yuriko Koike announced on May 21 that, for the first time, the capital was finally below the government-prescribed level for new infections. For other prefectures the results were still slightly short of the mark: Kanagawa and Hokkaido each had about 0.7 patients per 100,000 people over the past week.

In the case of Kanagawa, the Prime Minister explained that, although the specific criterion had not been met, the number was close and it was compensated by the fact that the route of infection was known for most cases in the prefecture. Previously, a government official told The Sankei Shimbun that Kanagawa’s number of infections had increased due to the rise in PCR tests.

Prime Minister Abe said the feared pressure on medical facilities had been avoided for the moment. Testing had also increased, allowing for the situation to be better monitored. “With the cooperation of the Japan Medical Association, we have managed to expand to nearly 100 PCR testing locations,” he explained.

A Step in the ‘New Direction’

In his address to the nation, Prime Minister Abe said that while there was no vaccine yet, Japanese society needed to find ways of co-existing with COVID-19.

He expressed hope that even culture-based sectors — including concerts and theatrical performances and tourism — could gradually go back to normality over the next few months.

He gave the example of professional baseball: the first match is envisioned to start with no spectators, then ramp up the audience to 1,000, then to 2,000, and so on.

For businesses where social distancing is more difficult to sustain, such as bars and karaoke rooms, Abe said that more detailed guidelines would be released in June to secure their speedy reopening.

Many details will be determined at the local level. Tokyo Governor Koike explained in a May 22 press conference how different sectors in the capital could gradually return to normality under a three-step plan, which would include slowly increasing opening hours at roughly two-week intervals.

The emergency had demanded an especially great sacrifice from those who had to shut businesses to deal with the crisis, and the Prime Minister took the opportunity to address exactly this point.

Mr. Abe revealed that on May 27 the government was set to approve an economic package the size of “one quarter of Japan’s GDP, the biggest stimulus in the world, to protect the Japanese economy.”

He continued, ”This is so we can face this once-in-a-century economic crisis.”

Over and above previously-announced economic measures, the Prime Minister revealed that on May 27 the government was set to approve an economic aid package for medical staff amounting to a maximum of ¥200,000 JPY per person.

The Prime Minister revealed the government was considering introducing a contact tracing app as a new way of trying to help citizens stay aware and contain the spread of infection.

“According to an estimate by Oxford University, if more than 60% of the population uses [the application], we can avoid a lockdown, and there are hopes for effectiveness,” said the Prime Minister. “I would like to ask for everyone’s cooperation regarding this as well.”

A Call for International Cooperation

The Japanese Prime Minister said that a key factor in returning to normality would undoubtedly be the development of effective drugs, including a vaccine, and finding other ways of containing the virus. He emphasized, however, that none of it mattered if it was not done on a worldwide scale.

“We cannot solve the world’s problems with an inward approach. However, the reality is that there are some countries around the world that have their hands full with their domestic situation,” he said.

Finally, the Prime Minister expressed the will to pitch “a transparent system to share the vaccine, which can be used also by developing countries,” to the G7 meeting in the first week of June. He added that showing strong leadership was the “responsibility of Japan in the face of the international community.”