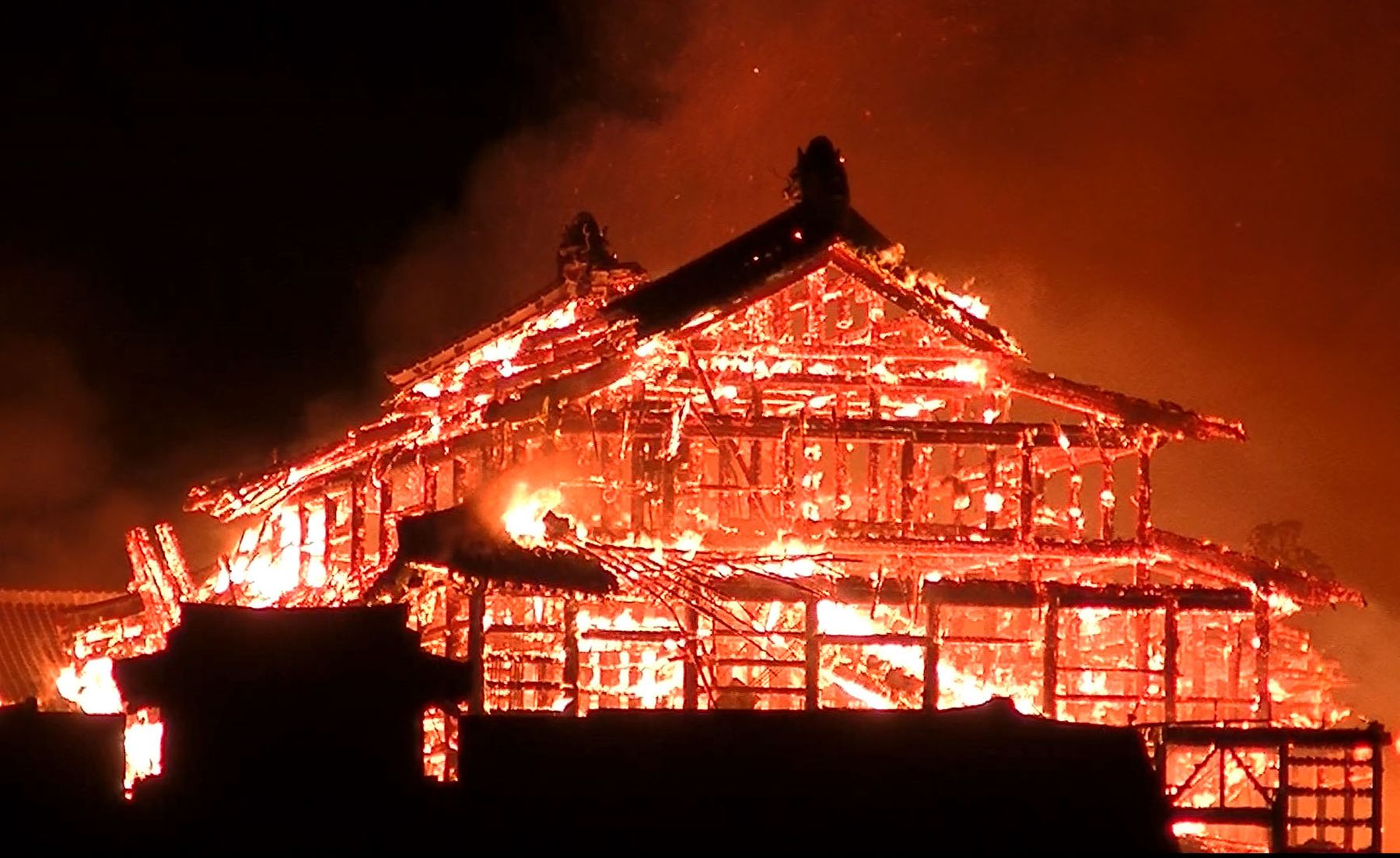 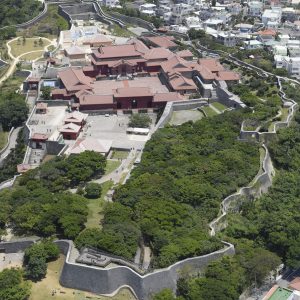 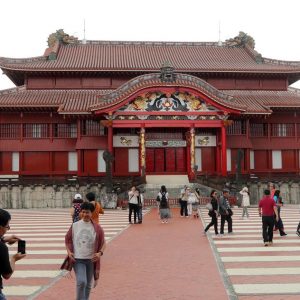 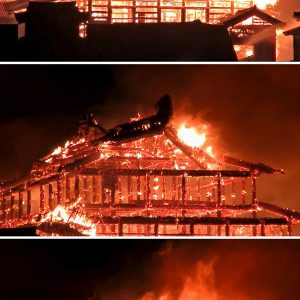 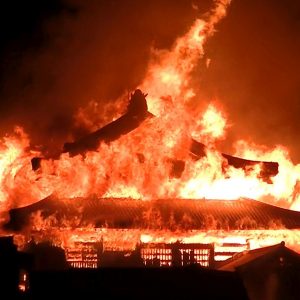 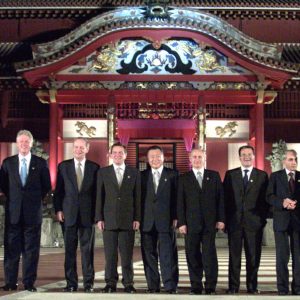 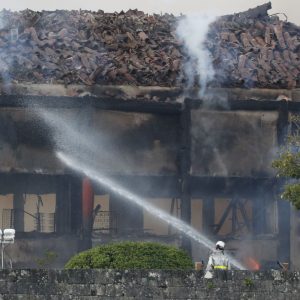 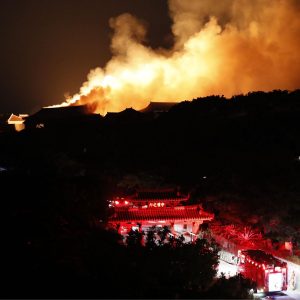 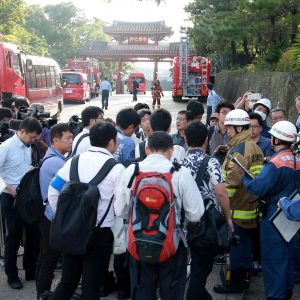 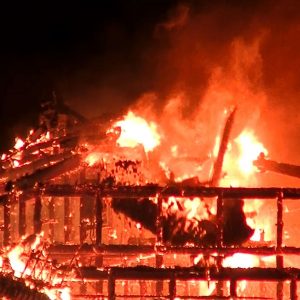 Many around the world were shocked at the fire at Shuri Castle in Okinawa on the morning of October 31 and are at a loss for words. The World Heritage Site is beloved by the people of Okinawa and Japanese around the country, and appreciated by the many foreign tourists and world leaders who have visited the historic site.

A domestic and international effort to help rebuild the castle has begun, although the reason for the fire has yet to be officially determined. However, the location of where it started appears to have been the main hall of the castle.

In the weeks since the fire, many questions have emerged, including why the buildings did not meet fire code requirements and how the Okinawa government could have failed so badly at managing the crisis.

According to reports, a sprinkler system had not been installed inside the castle during its reconstruction, completed in 1992. Moreover, firetrucks and fire personnel had difficulty accessing the area.

It is unclear how these and other structural issues passed fire codes. However, the lapses cannot be casually chalked up to the phrase increasingly used in recent years, sōteigai, or “unexpected.”

More significantly from the perspective of the author, who lived in Okinawa a total of eight years — including six working for the United States Marine Corps as the Deputy Assistant Chief of Staff for Government and External Relations — the prefectural government’s crisis management capabilities were nearly non-existent.

Although there are many possible reasons, one is that the ideology of the extreme Left in Okinawa affects the bureaucracy and decision-making process in a very unhealthy way, to the extent that it becomes paralyzed. All decisions about new policies or experiments in the prefecture are made through a “political lens.”

As an example, in 2011 after the Great East Japan Earthquake, I launched the Disaster Cooperation Program on behalf of the Marine Corps. Earlier in 2006, as a tenured professor at Osaka University’s School of International Public Policy, I had drafted and published the concept for it and for what later became Operation Tomodachi. Having moved to the Marine Corps in 2009, I was fortunate to be in a position to launch the program as a senior staff member after the 2011 earthquake.

Unfortunately, despite wide dissemination of the recommendations and lobbying efforts, few understood the need until the March 2011 disaster occurred. The initiative, though, was meant to build cooperative relations ahead of disaster, to allow the U.S. military and vulnerable communities to get to know one another prior to there being a need to be dispatched.

Others in Japan began to recognize the need for cooperation, however. One of those was Shizuoka Prefecture Governor Dr. Kawakatsu Keita, whose dedicated and proactive staff coordinated with ours over responses to a potential Tokai Earthquake. Participation in their disaster drills was widely reported in the media.

Upon returning to Okinawa, I visited the prefectural government to explain the program we had started with Shizuoka, and to ask that we develop the same type of relationship with Okinawa Prefecture, particularly as we were neighbors. Unfortunately, my suggestion was ignored by the prefecture’s disaster office.

Disappointed, I protested to the prefectural leadership and called on them to reconsider, appealing both to their conscience and to the fact that they had a responsibility to protect the lives and property of the people of the prefecture.

However, it wasn’t until September 2014, three years later, that we were finally able to participate officially in disaster drills sponsored by the prefecture. In the interim, had an earthquake or tsunami struck the prefecture, which is spread out among many inhabited islands over a wide area, the response would not have been as good because the degree of cooperation was basically nil.

Due to the political ideology of opposition to the bases demonstrated by the governor and his predecessor, the prefecture has failed to enhance or truly expand the partnership started in 2014. As a result, the prefecture was unable to protect the world cultural heritage site that is Shuri Castle.

In the case of the Shuri Castle fire, as it turns out, the prefecture made no request for U.S. military helicopters to help with the firefighting. Had a request been made, it is likely that there would have been less damage.

Indeed, the prefectural government compounded the situation by their constant opposition to nighttime flight training, which would have been invaluable to help the U.S. military fight the overnight fire alongside the local fire department.

Curiously, not only did the prefecture avoid asking the U.S. military to assist, but it also refrained from requesting assistance from the Japan Self-Defense Forces. Indeed, it seems the prefectural government and the SDF in the prefecture, particularly the Ground SDF’s 15th Brigade, do not have a close relationship.

One can find evidence of failed cooperation in the Ministry of Defense’s annual report, Defense of Japan. In it is the table, “Employment Situation of Retired Uniformed SDF Personnel in Disaster Prevention-related Bureaus in Local Government” (Reference No. 61 in the 2019 edition).

Almost every prefecture and many major cities and towns have former SDF officers assigned to their crisis management sections to help with planning, training, and coordination. However, the anti-war, anti-base, anti-SDF Okinawa Prefecture Government (OPG) has not hired even one, despite the annual battering the area gets from typhoons.

Moreover, of the 41 cities, towns, and villages in the prefecture, only Tomigusuku City has hired a former SDF member in that capacity. As a result, the OPG is unable to truly share information with the Self-Defense Force or guarantee a smooth dispatch when the need arises.

Disdain for Cooperation Worsened the Fire

This unfortunate lack of cooperation, I believe, is behind the scale of the Shuri Castle fire. Crisis management is not just a phrase. It is one of the most important responsibilities governments, organizations, and other entities must execute.

It is likely there will be more reports about what went wrong, including some whistleblowing. This is important, as it will lead to better government and improvements in protecting cultural assets.

In 2016, I published a book in Japanese called Okinawa-ron (オキナワ論, Japanese, Shinchosha publishers). In it, I pointed out the phenomenon of Okinawa opposing everything — so much so that I created a new word, NOkinawa, to capture this. Over the years, the prefectural government has sought to fight with the central government, distance itself from the SDF and U.S. military, and criticize all of them.

I wondered in the book, and in all honesty now, whether Okinawa is truly interested in protecting its 1.5 million residents.

Building Something Good Out of the Tragedy

I have recommended that, in order to improve the situation, it is necessary for the U.S. military in Okinawa and the OPG to exchange liaison officers.

At the minimum, I believe it would be good if the OPG sends a liaison to work in the office of the Okinawa Area Coordinator (U.S. military) in my old building aboard Camp Foster. In this way, coordination and information-sharing and trust could be enhanced in a number of ways.

In the future, there will likely be more situations, incidents, accidents, or disasters in which the immediate sharing of information will be vital. If a close relationship is established like the one recommended here and the prefecture’s crisis management capabilities improved, then it will show that something good can come from the Shuri Castle tragedy.

However, crisis management is not just about relationships. Leadership is also important. Governor Denny Tamaki, who came to power following the sudden death of his predecessor, Takeshi Onaga, was elected to office on September 30, just one month before the fire.

Tamaki has been criticized as the “absent governor.” He is constantly on trips to mainland Japan and abroad, and questions have emerged about whether it is appropriate for him to be gone so much. In particular, there were many typhoons and storms this year causing much damage in the prefecture.

It would not be an exaggeration to say that the disaster at Shuri Castle was in many ways the result of the prefectural government’s failure to plan for the worst.

December marks the 23rd anniversary of the decision to relocate Marine Corps Air Station Futenma within the prefecture. There has been constant opposition during these years, quite often led by the prefectural government itself.

It will be necessary to overcome the Shuri Castle tragedy in the short term, while also rebuilding relations with the central government over the longer term. Looking at Governor Tamaki’s record over the past year, it is unclear if he has the ability to do so.

However, there is no doubt that many people in the country, the U.S. military, and others who love Okinawa hope to support and help rebuild the prefecture, starting with cooperation out of the Shuri Castle fire.