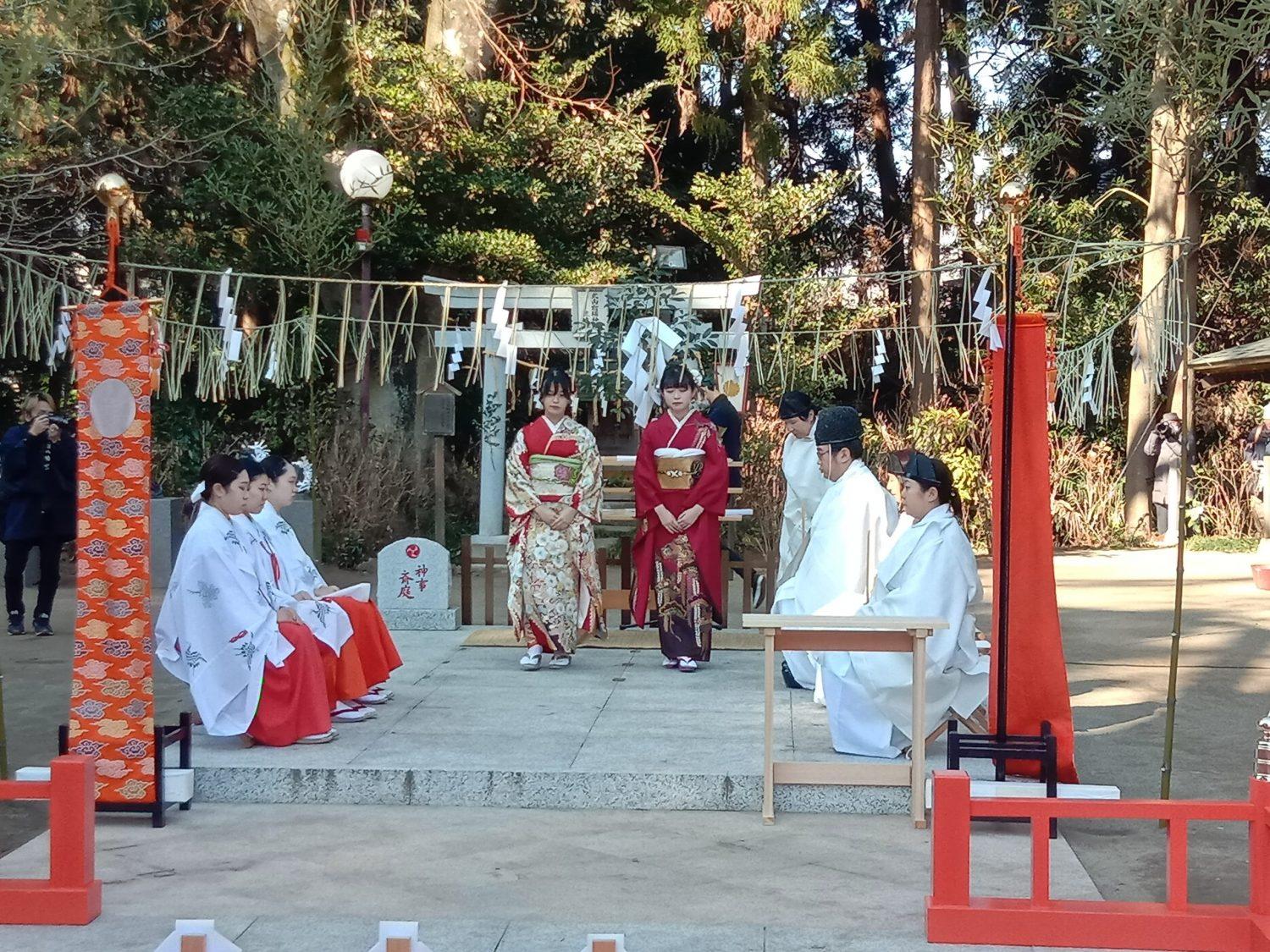 In the early spring, there is Hagoita Hono at Mito Shrine (© by Kaoru Kuriyama)

In a quiet area of Mito, Ibaraki Prefecture about 100 km northeast of Tokyo, the local Mito Shrine was holding a festival with a ritual game of hanetsuki. It's a racket game like badminton but without a net.

Although hanetsuki is not often seen these days, it is a traditional fun game played during the New Year season. It involves hitting the shuttlecock back and forth with a wooden paddle. This game, however, was held in the sacred precincts of Mito Hachimangu Shrine, where a solemn, ceremonious mood prevailed under a clear sky and in the crisp winter air.

Originally this may have been a Shinto fortune telling ritual to predict this year's rice harvest. In those times, the outcome of the rice harvest forecast depended on a game of hanetsuki between the shrine's priestesses and shrine maidens.

Speaking about shrines, there are two main religions in Japan. Shinto is indigenous, and  Buddhism was introduced from continental Asia around the 6th century. The two coexist harmoniously. And many people accept or believe in both, or are influenced by both religions at least in some way.

While Buddhism aims for spiritual enlightenment, Shinto has been closely linked to rice cultivation and harvesting. So, respect for nature and the deities is probably the one of the main underlying beliefs.

Worshipers mostly wish for good health and well-being in the family, while youths may wish for academic success. Warding off evil and misfortune is also an important part of Shinto, so many kinds of amulets are offered at shrines and temples. All of these come together in the New Year.

However these days the timing in January coincides with Coming of Age Day.

To celebrate the fledgling new adults and remind us that spring is just around the corner, five young girls clad in traditional kimono take part in the event with the blessing of the shrine.

Also, plum blossoms start appearing when it is still cold, and signal the arrival of the long-awaited spring. And soon there will also be a spring flower festival called "Ume Matsuri" (Plum Blossom Festival) in Mito.

The day I visited, two young adults dedicated giant replicas of decorated paddles called hagoita to the shrine. This was followed by a ritual game of hanetsuki with the "Ume Taishi," literally "Plum Blossom Ambassadors."

These messengers of the coming spring are an iconic symbol and important feature of another upcoming key event in Mito. If you visit the Ume Matsuri in Mito between February 11 and March 19 this year, you will be greeted by six charming, kimono-clad "Ume Taishi" who, at first glance, appear to have been chosen for their photogenic beauty.

Here's a fun fact about Coming of Age Day (Seijin no Hi). Celebrating the transition from youth to adulthood has been a longstanding tradition in Japan. But it was not until 1948 that this became a public holiday, and now the date is the second Monday in January. Last year the legal age of adulthood  was lowered from 20 to 18, but many municipalities have decided to continue holding ceremonies for those who have reached the age of 20.

Mito, where the shrine is located, was ruled by one of the three families descended from the youngest son of 17th century Shogun Tokugawa Ieyasu. Even now, relics from the feudal era can be seen in many parts of the city.

The spring festival venue, Kairakuen, dates back to 1833 when the 9th ruler and lord Tokugawa Nariaki opened a garden by the lake for his subjects. And now the place is a vast plum tree garden with more than 3,000 trees.

Year of the Rabbit at Mito Shrine

Perhaps I should mention another character who was popular at the shrine- the stone statue rabbit standing in front of the main prayer hall. 2023 is the Year of the Rabbit. And it appears this small animal will have to work hard to meet everyone's high expectations.

Worshipers wishing for good fortune tied many strips of paper called omikuji all over the rabbit ー even around both its ears. In the end, most of the statue was covered with only its head visible. However, the rabbit still put on a brave face like a lion.

Omikuji is a strip of paper offered at shrines or temples to tell your fortune and give advice on how to improve your life in the future. For a small offering, omikuji is randomly chosen from a box or drawn by shaking a container until a fortune stick comes out. There is a number on the stick and a fortune slip with the corresponding number. If the slip advises you to exercise caution or wait for a better chance, it is often tied to a branch of a tree in the grounds of the shrine or temple.

You may have seen omikuji tied to tree branches in the grounds of a shrine or temple. But have you ever seen any of the 12 animals of the oriental zodiac inundated with so many requests!?

Incidentally, the calligraphy dedicated to the shrine just behind the rabbit reads "Heion 平穏" which means tranquil, peaceful." It is a thought provoking reminder of what so many people strongly wish for in these uncertain times.