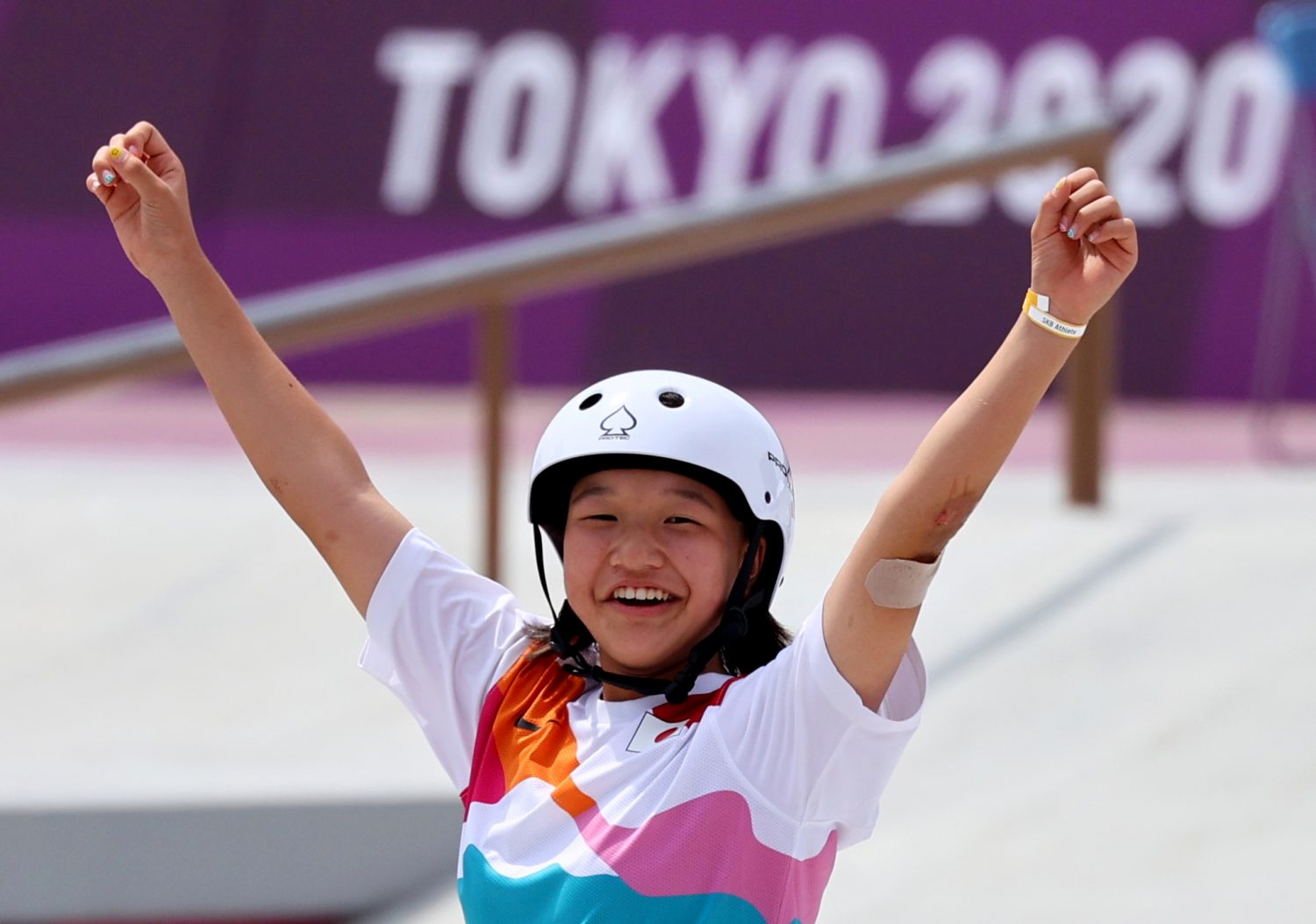 Although she is just 13 years old, Momiji Nishiya made history on Monday, July 26 at Ariake Park by striking gold in the women’s street skateboarding final. She is the youngest Japanese ever to win a gold medal, and the first woman in history to win a medal in the new Olympic sport of skateboarding.

Nishiya broke the previous age record held by swimmer Kyoko Iwasaki, who won the women's 200-meter breaststroke race at the 1992 Barcelona Games at the age of 14.

It was a slightly overcast morning in Tokyo Bay, but Japan stole the show with a beaming Momiji Nishiya earning 15.266 points, capturing a gold medal. Fellow Japanese and friend Funa Nakayama, who is 16, finished third with 14.49 points, to nab the bronze medal. Brazil’s Rayassa Leal, who is 13, claimed the silver with 14.64 points.

Leal, who ranked third in the Street Skateboarding World Championships in Rome in June, brought an immense amount of energy to the competition. Nishiya was the runner-up in Rome.

On July 26, Nishiya delivered a strong performance throughout the final, with a particularly strong effort on her last three tricks. One heart-warming moment was during the second run, when the 13-year-old Osaka native fell during a trick. Unlike many who get discouraged and don’t do so well in the latter part of a run, Nishiya quickly shook it off, smiled, and completed her run with a good score of 2.91.

“For the first part of the final, I didn’t think I was going to win,” reflected Nishiya speaking to NHK. “But then, all those around supported me, they cheered for me, and I thought to myself, I need to do this.”

“Going forward, my dream is to become the world’s best-known skateboarder,” said Nishiya with unflinching positivity and resolve.

Bronze medalist and Toyama native Nakayama, with her long black ponytail trailing down her back, wowed onlookers with a front-facing rail slide, a nifty skill uncommon even among male athletes. Nakayama started skating through the influence of her father, who was the first to take her to a skating park.

One of the favorites going into the final in the early afternoon was 19-year-old Aori Nishimura, the winner at this year’s world championships and a high flyer in the sport in Japan. However, after a wobbly start, she failed to score in any of her tricks, and on one occasion had a rather nasty fall, which caused her to bleed slightly from the elbow. Nishimura, who is from Edogawa Ward in Tokyo, finished last among eight finalists.

Another highly ranked performer who missed expectations is Alexis Sablone, 34, from Brooklyn, New York, who had trouble starting in the trick stage of the final. Historically a top performer, Sablone ranked first at the X Games in 2010, 2012 and 2015. On July 26, after scoring a stellar 5.01 on her third trick, the American veteran skateboarder failed to score twice in a row, thereby making way for the younger athletes to take the podium.

Skateboarding, in its two categories of street and park, is one of five sports first introduced in the Tokyo 2020 Games. On July 25, fellow Japanese Yuto Horigome also made history by winning the first ever gold Olympic medal in the men’s street skateboarding final at the age of 22.

Together with surfing, sport bouldering and freestyle BMX it’s hoped that these new disciplines will bring attention from a younger generation to competitive sport.