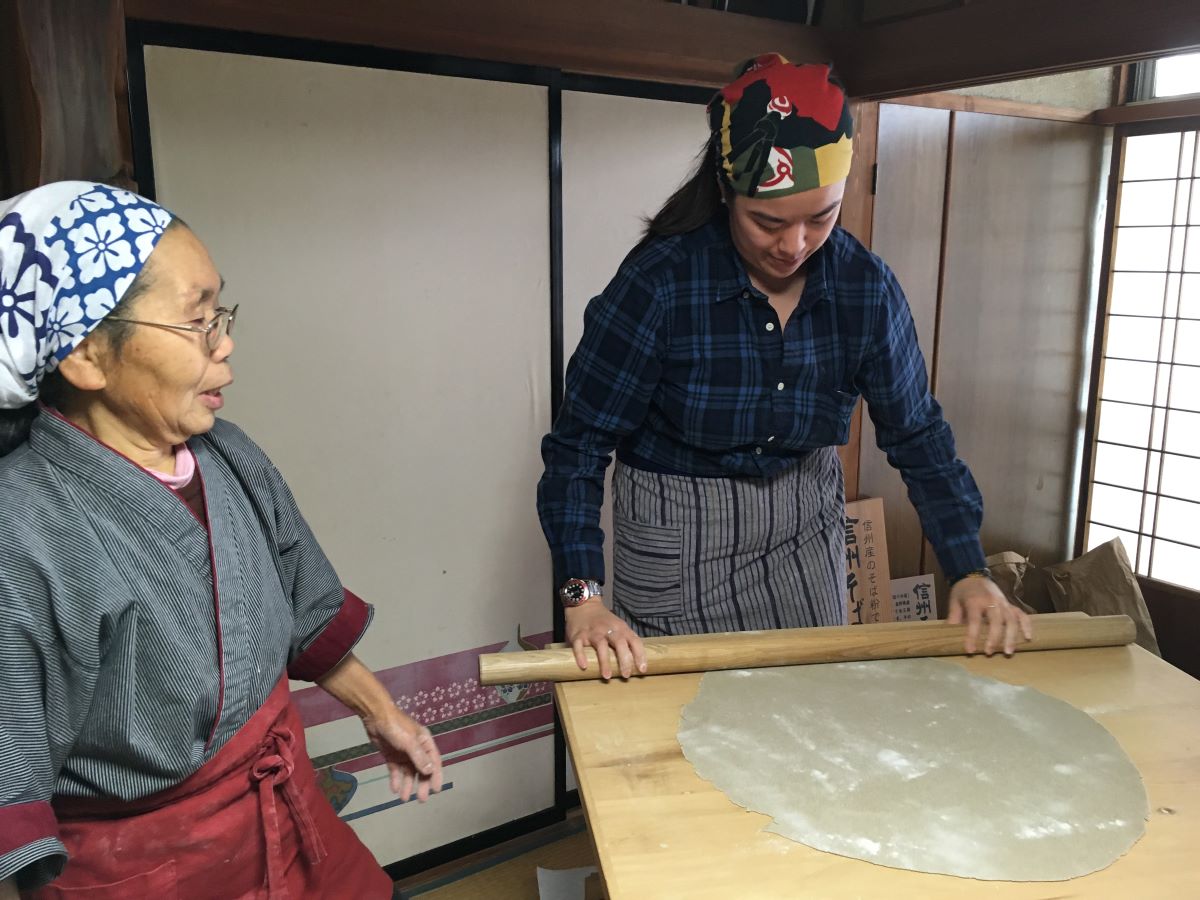 In Nagano, the mother daughter team of the Kitazawas teach visitors how to make the region's famous soba noodles by hand, from scratch.

It is no exaggeration to say Nagano’s soba noodles are so delicious that it becomes difficult to eat them anywhere else. I am occasionally tempted to slurp down a quick bowl in Tokyo before catching the bullet train home. Inevitably I regret my impatience.

Pinning down the reason Nagano‘s noodles are so good is not easy, though. Maybe it’s the ingredients, the preparation method, the broth, the care that goes into making them. Or perhaps it is even the cooler Nagano air that makes me want to eat soba.

Because of its diverse climate, Japan’s foods are more seasonal and geographically-specific than anywhere else I have traveled. For whatever reason, Nagano’s noodles are just better.

Making noodles from scratch will heighten your appreciation for this Shinshu (Nagano region) specialty, maybe even making you want to try it at home.

From Poor-person’s Food to Gourmet

Soba wasn’t always such a delicacy in Japan. Until recently, mountainous areas grew buckwheat out of necessity because it survives on slopes and in poor soil unsuited for rice cultivation.

Soba was a poor-person food, not something you could sell or serve to guests. Little did they know buckwheat was much more nutritious than the white rice consumed by Japan’s elite.

Hachinoko, near Ryuoo Ski Park, is where I take my tour clients for their first soba-making experience (soba uchi taiken). Hachinoko is a small farmhouse operated by the Kitazawas, a mother-daughter team.

The mother (now over 80), whose strong, worn hands have been making soba for decades, is rail thin and couldn’t stand taller than 4’11. When I am there to translate, she rambles freely about everything related to soba. When I am not present she has a series of laminated cards to compensate for her almost non-existent English. But she wants to tell people about her love of buckwheat, and the desire to communicate always overcomes any minor language barriers.

Washing and wearing appropriate soba-making outfits is the first step. The gear includes Japanese housewife aprons and bandanas to get us into the mood. Kata, or the proper way of doing something, is vital to all Japanese arts. Similar to martial arts, there is an appropriate way to make soba, and we must first look the part.

Geared up and ready to go, we move to the millstone, a 40-kilogram hand-grinding apparatus. Soba kernels grow on a flower in clusters, and we must remove the hard external husk to access the tiny grain inside. Nowadays, machines speed up this process, but we grind in the traditional method.

People still use the husk in environmentally friendly but only marginally comfortable pillows. The stone is burdensome and requires a certain rhythm to spin, while the handle is an ancient-looking branch from a tree in the garden.

One must add the correct amount of soba grains while constantly turning the millstone, never losing momentum. Everyone struggles at first.

In typical fashion, Kitazawa-san makes it look easy, putting all of her body weight into spinning the stone that weighs almost as much as her.

With a tiny amount of soba flour produced, we add some machine-ground flour and move to mixing in a huge wooden bowl dedicated to the next step. Soba noodles typically have only two or three ingredients: buckwheat, water, and sometimes wheat flour to make the noodles glutenous and stick together.

Only soba masters can produce 100% buckwheat noodles, called Juwari (10 parts soba). In this area, though, a fibrous thistle called Oyamabokuchi is used instead of wheat as a connector. Just like foraging Sansai, people here had to be resourceful and use whatever materials they could find in the forest for free.

Slowly mixing hot and cold water in a precise order, the soba flour becomes a dense, gooey ball. It’s time to roll out the dough.

Here, things get interesting. We start speaking to the dough, calling out phrases like “Oishikunare – become delicious” and “Ton-Pa,” an onomatopoeia for the sound the dough makes when pounded. Indeed, handmade soba is called Teuchi or “hand-pounded” in Japanese, and the name comes from this step.

Ordering the dough to become delicious communicates your feelings when preparing the meal and forces you to breathe.


Cutting the Dough Into Noodles

Finally comes the most challenging part of the process: cutting. This determines the type of noodles we will be enjoying today.

I have seen everything, from perfectly cut soba to noodles the thickness of fettuccine and udon. Kitazawa-san constantly reminds us to breathe.

When cutting, it is not about forcing anything by using your strength. Instead, go with the flow and let the knife do the work. Pressing down too hard smushes the noodles together, and she must carefully separate them.

She periodically demonstrates or fixes the botched dough, cutting with accuracy at an impossible speed. At least it will be easy to tell which noodles she made.

Soba-making completed, the daughter takes the finished product away to boil in the kitchen. We clean up, wash the clay-like dough off our hands, and sit down at the low kotatsu-style table, toasty underneath during the winter months.

Various homemade delicacies appear, such as pickled vegetables, apples, beans, and tempura. There is even a soba pancake served with apple-miso paste, something I have never seen outside this restaurant.

Eventually, the hot and cold soba varieties arrive. The broth for the hot noodles is subtle, allowing you to taste the buckwheat flavor. It is terrific when sprinkled with Shichimi chili flakes.

The cold noodles are chewy and fragrant. Most connoisseurs eat soba cold because you can taste the buckwheat so much better. The thistle adds a squeaky texture that I like. Add endless cups of green tea, and the meal is incredibly healthy and satisfying.

Benefits of Doing It Yourself

I have been here dozens of times, and I love a few things about taking people to experience soba making.

First, your appreciation for handmade noodles and food in general increases dramatically. Making even a small portion of noodles requires immense effort. It is hard to appreciate unless you have done it yourself, and it is harder to waste food afterward.

Second, in the era of convenience store obentos and fast food, the soba culture is something that I hope Japan retains.

Soba is slow, local food that requires resourcefulness, dedication, and practice. Indeed, soba is an artform with ranks of soba masters like black belts in judo or karate.

Eating at one of the best soba restaurants in Nagano, I made a casual remark to the owner that I would like to practice soba uchi more often. Looking sternly at me, he exclaimed that making soba takes years of dedication and is not something to be taken lightly.

Finally, eating more soba is just healthy. In my noodle ranking of Japan’s major varieties (soba, udon, ramen), I like the taste of ramen the best, but I like how soba makes me feel. With a plethora of nutrients such as manganese, thiamin, zinc, potassium, iron, phosphorus, and high fiber, it’s easy to see why.

Soba can even be made gluten-free and vegetarian or vegan. I have always thought that soba would gain popularity worldwide for all these reasons. It is a Japanese culinary secret just waiting to be unleashed. Make sure to try a soba uchi taiken on your next visit to Japan.