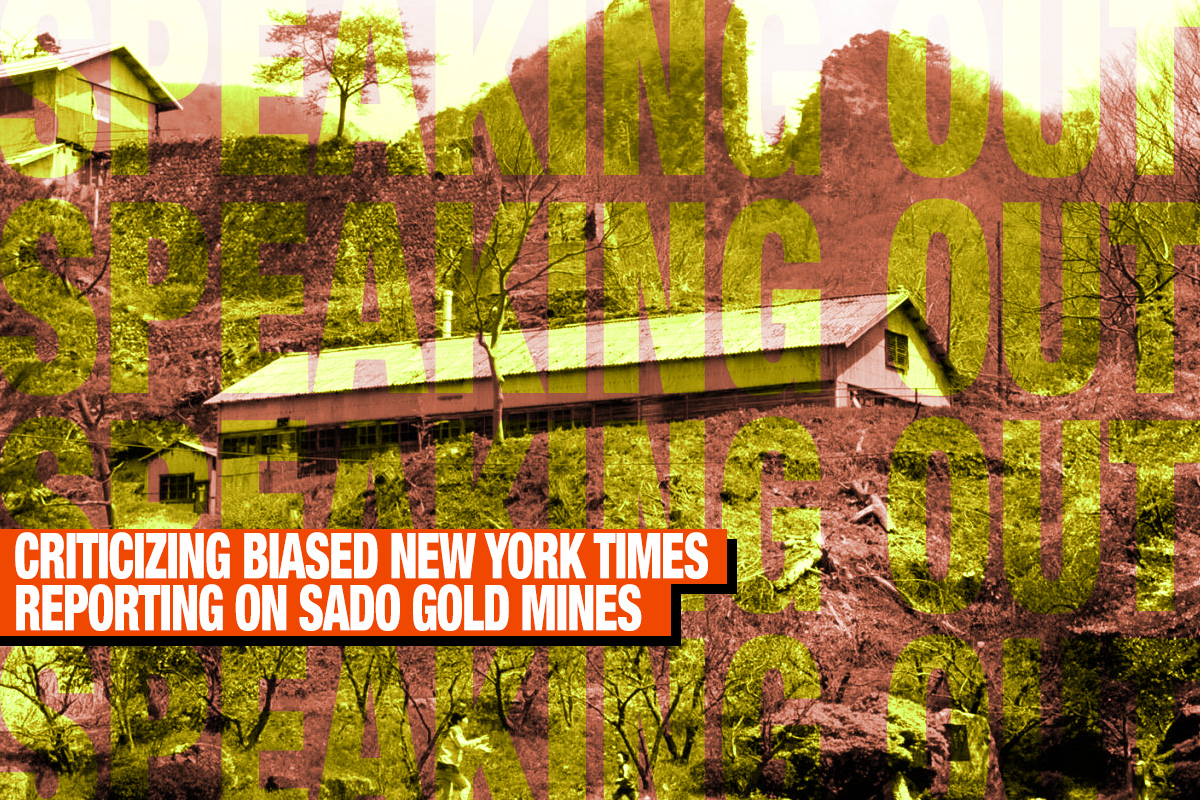 The Edo-era history of the Sado gold mines in Niigata Prefecture has been submitted for listing as a World Cultural Heritage Site by UNESCO.

The New York Times carried an extremely unbalanced article on February 21, 2022 about the Sado gold mines, which the Japanese government has recommended as a candidate for World Cultural Heritage designation by the United Nations Educational, Scientific and Cultural Organization (UNESCO). The online edition of the article is titled “Japan Wants to Showcase Gold Mines’ History. Just Not All of It.”

As indicated by the title, the article is written in line with the South Korean Moon government’s assertion that Japan is attempting to conceal history concerning Koreans’ wartime labor at the Sado gold mines.

This article has two fatal flaws.

First, the authors of the article, though supposedly reporting from Sado Island in Niigata Prefecture, failed to interview anyone who knows the reasons behind Sado City and Niigata Prefecture’s limitation of the timespan for World Cultural Heritage designation to the Edo era, long before World War II. The article swallows South Korean media allegations that Japan limited the period to conceal the history of the gold mines during the war.

Had they asked, they would have learned that the limitation simply reflected the advice of experts involved in the screening of UNESCO designations, rather than any concern about the mines’ wartime history.

The real reason is that the Sado gold mines introduced Western technologies after the Edo era. The remains of Western technology can be seen at various locations in the world and therefore have low historical value.

On the other hand, Sado’s unique drilling technologies during the Edo era used only basic hand tools for achieving one of the world’s leading mine production levels. These Edo-era mines therefore have high value. These are facts that anyone would learn by interviewing people on the island with knowledge of the mines.

Second, the article says, “Yet there is a darker part of Sado’s history […]: the period during World War II when about 1,500 Koreans were conscripted to work in the mines as subjects of Japan’s colonial rule.” The authors regard Korean workers as having been engaged in “forced labor” at the mines. The article only cites comments by Japanese historian Yasuto Takeuchi in support of the allegation of forced labor. “Mr. Takeuchi said he had reviewed records of more than 100 Korean laborers who tried to escape the mines — evidence,” he said, “that they were forced to be there.”

However, according to primary historical sources, 1,005 Korean workers had gone to work at the Sado mines through recruitment by 1943, including 148 who later escaped the mines. The New York Times article says they “tried to escape the mines,” giving the impression that they faced a stiff police crackdown. Actually, however, those who wanted to did leave the mines.

The article misses the fact that the average exit rate for Korean workers mobilized by Japan during the war stood at around 40%, far higher than for Korean workers at the Sado gold mines. The biggest reason for their exit was to move to better-paid jobs. As young Japanese men left their workplaces due to military draft, wages rose sharply, prompting brokers to pick out Korean workers.

The article also failed to take up the opinions of scholars like me who deny that Koreans’ wartime labor was forced, and insist that the presence of those who escaped does not qualify as evidence of forced labor. This lack of academic balance may be the reason the article was so extremely biased. Not only Takeuchi but also American, South Korean and German scholars quoted in the article are all advocates of the position that there was forced labor.

Meanwhile, the article quoted Sado residents as asserting that Korean workers were treated in the same way as Japanese workers. Rather than listen, the authors used their comments to create an impression that residents are ignorant of history.

(A version of this article was first published by the Japan Institute for National Fundamentals, Speaking Out #892 in English on March 3, and in Japanese on February 28, 2022.)