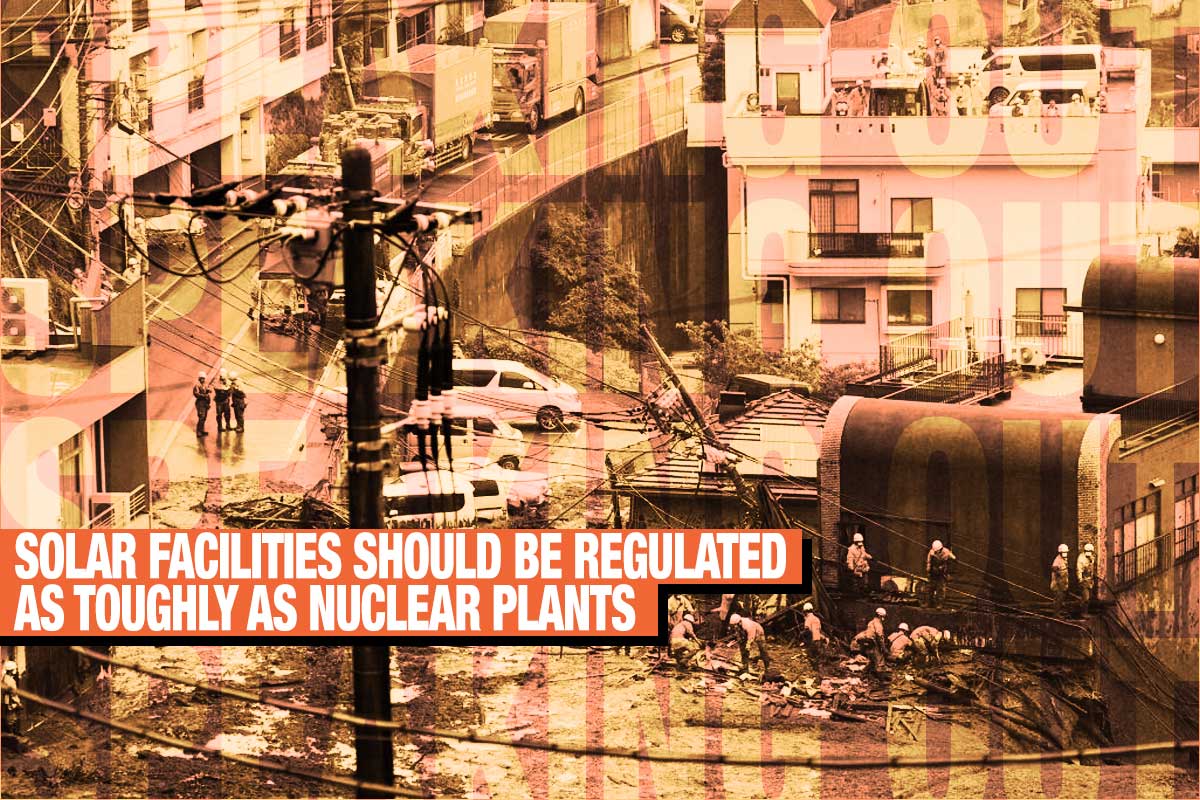 A mega-solar photovoltaic plant is located near a point where a devastating mudslide originated following torrential rain on July 3 in the town of Atami, Shizuoka Prefecture.

While any relationship between the facility and the mudslide remains unknown, the government is investigating the facility. If regulations are toughened on solar PV facilities at disaster-prone mountainous locations, Japan’s solar PV promotion policy might be affected.

The mudslide, which hit 122 houses over a distance of 2 kilometers and left nearly 30 people dead or missing, occurred as a 50,000 cubic-meter mound of soil collapsed due to torrential rains.

“If the traditional water path is filled with soil, it would cause a terrible incident,” local residents were quoted as saying before the mound was created.

According to the Atami municipal government, it received and approved an application for mound development at the location in 2007 from a real estate company that owned land in the area. In response to later complaints from local residents, municipal officials checked the mound and found wood debris, bathroom tiles and other industrial waste mixed into the soil. In 2011, a new landowner reportedly removed industrial waste under the direction of the municipal government.

On July 9, 2021, geologist Kunio Shiosaka told a press conference that as the ridge was cut during the mound development, a rainwater catchment area was changed to allow more rainwater to flow into the mound, and likely trigger the mudslide.

The government plans to install an additional 20 GW of solar PV capacity by 2030. But construction and deforestation for installing mega-solar PV facilities in mountainous areas could not only impair scenery, but affect disaster prevention. It should be done cautiously.

The cause-to-effect relationship between the mega-solar PV plant and the Atami mudslide has not been confirmed. But many people are concerned over the installment of solar PV facilities in disaster-prone mountainous areas and there are suggestions that they should be removed.

Regulations on solar PV projects may have to be as tough as those on nuclear power plants, requiring environmental assessment, verification of project operators’ excellent business capabilities, and on-site inspections by national and local authorities after the development.

(A version of this article was first published by the Japan Institute for National Fundamentals, Speaking Out #813 in Japanese on July 12, and in English on July 14, 2021.)