[Speaking Out] The Defense of Japan: Heaven Helps Those Who Help Themselves 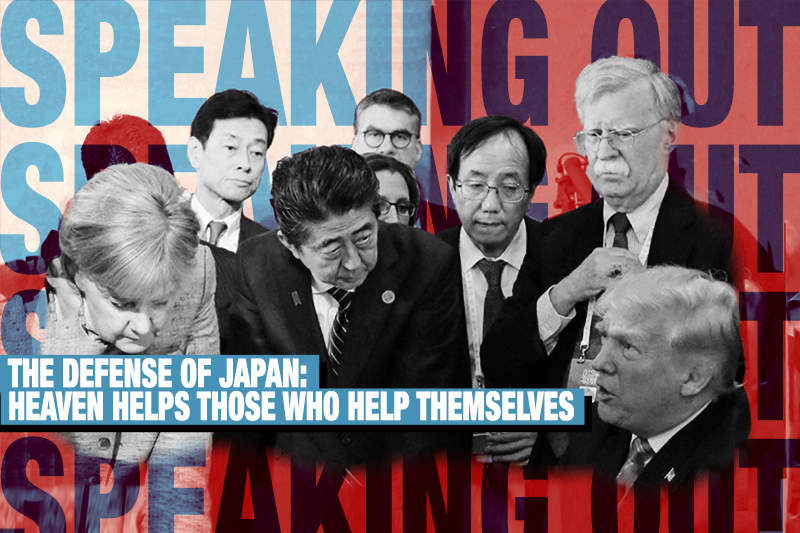 U.S. President Donald Trump’s former national security adviser John Bolton, who has authored a book pulling back the curtain on the Trump administration’s foreign policy, said there is real risk that Trump, unlike previous U.S. presidents, might withdraw U.S. forces from Japan.

The comment came in Mr. Bolton's recent interview with the Sankei Shimbun, in which he advised that Tokyo should take more seriously the president's request for Japan to increase the share of costs it shoulders for stationing U.S. forces in the country.

Bloomberg, on June 25 last year, reported Trump as musing about ending the Japan-U.S. security treaty. Since then, Trump has twice reiterated the unfairness of the treaty that requires the United States to defend Japan without obligating Japan to defend the U.S.

The president's complaint came as a big surprise to Japan. It might have been natural for an interviewer to ask Bolton, who was working with Trump until last September, about the president’s real intentions regarding the treaty.

U.S. Forces Could Pull Out of Japan

The dominant view in Japan might have been that Bolton would say U.S. Forces would never pull out from Japan. In fact, however, he instead pointed out the risk of Trump withdrawing U.S. forces from the country.

I have remained alert to comments from most defense experts. More than a few have remained silent about Trump’s remarks regarding the Japan-U.S. alliance. This is because the impact of the remarks would be too great.

The Japan-U.S. alliance has provided an absolute core value for Japan’s conservative opinion leaders. They would lose credibility if the ground underlying their theories on the alliance is contradicted by the top U.S. leader.

They have no choice but to admit they themselves are wrong, or conclude the U.S. president is wrong. Unless they determine Trump is wrong, their theories become untenable.

In Japan, criticism of Trump in both print and visual media has been markedly impolite, partly because Japanese intellectuals have had a long association with U.S. Democrats, and also because criticism against Trump has intensified in America.

They depend upon a foreign country for Japan's defense, without trying to defend the country on their own, while complaining it is the foreign country that is undependable. While failing to understand their own circumstances, in the face of U.S.-China confrontation some shamefully assert that Japan should be a bridge between the two powers.

It might be this Japanese trend that upset Toshihiro Minohara, a Japanese American professor of politics at a graduate school of Kobe University. In a contribution to the Sankei Shimbun newspaper on July 2, he wrote:

There are people who may be comfortable with arguing that Japan should mediate between the United States and China as the two confront each other… As I have noted earlier, however, the diplomatic power of any country failing to secure national security on its own is limited. Even before noting so, I question what a country can do, despite its failure to rescue its own citizens abducted by North Korea, or those who have been unreasonably arrested and detained by China.

Unless Japan revamps its defense policy based on the assumption of a gradual U.S. withdrawal from Japan, Japan will be ignored by every other country.

(A version of this article was first published by the Japan Institute for National Fundamentals, Speaking Out #700 on July 15, 2020.