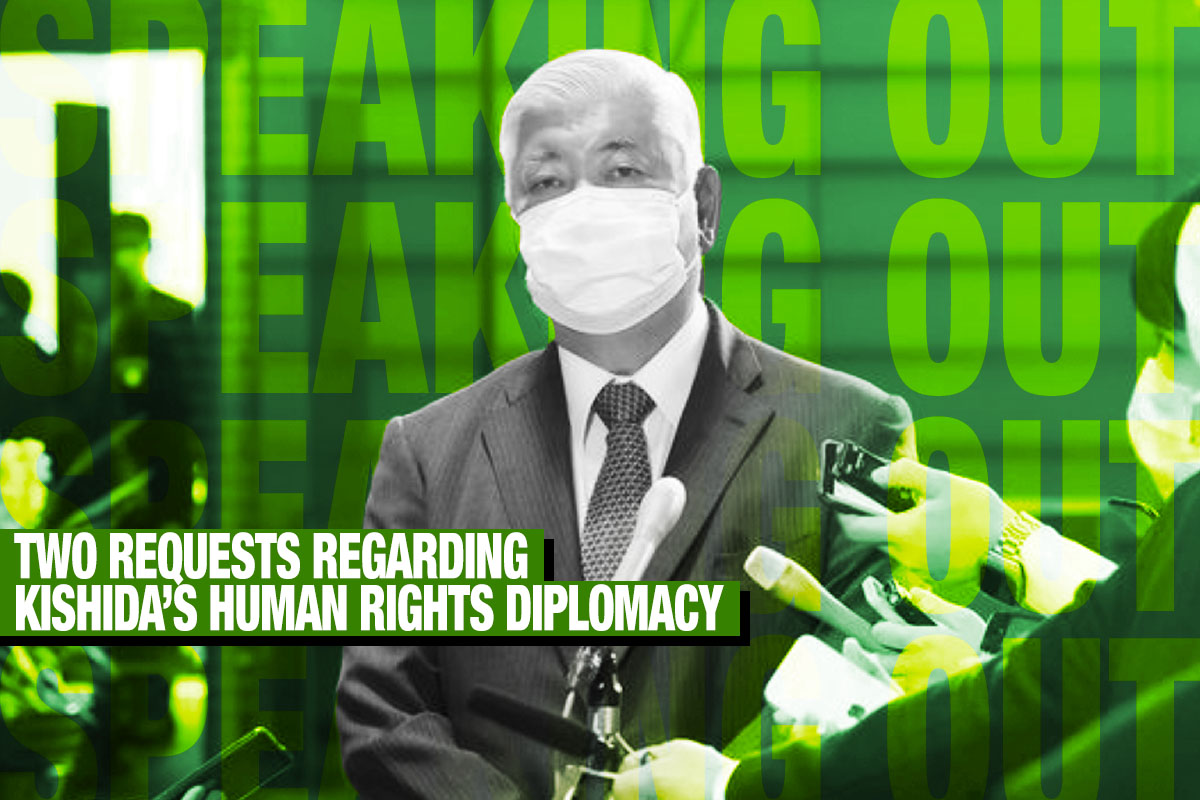 Japan’s Prime Minister Fumio Kishida has appointed former Defense Minister Gen Nakatani as assistant to the prime minister in charge of human rights issues. The appointment should be appreciated as demonstrating the attitude of Japan, as a civilized country, sharing universal values in the fight against terrible human rights abuses by the Chinese Communist Party regime against Uyghurs, Tibetans, Southern Mongolians, Hong Kong citizens, the Falun Gong group and Christians.

In this respect, I would like to make two requests of PM Kishida.


Enact a Law for Sanctions on Human Rights Abusers

The first is to promptly enact a law allowing the imposition of sanctions on the grounds of human rights violations.

In April 2021, the Nonpartisan Parliamentary Association for Reconsidering Human Rights Diplomacy, for which Nakatani served as co-chair, called for urgently enacting a Japanese version of human rights abuse sanction laws such as those already in place in Western countries. “It is necessary to establish a law that enables the government to act, rather than making only oral protests, to prevent allegations that Japan only evades action against human rights violations,” Nakatani said then. I would like him to make efforts to enact such a law now.

I heard that relevant government agencies have raised opposition to the enactment of the law for the reason that it would be difficult to verify human rights abuses. It brought to mind the time we launched a national movement for imposing sanctions on North Korea in 2003 over its abduction of Japanese citizens. The Foreign Exchange and Foreign Trade Control Act at the time conditioned any external sanctions by Japan on having a United Nations Security Council resolution or the like. There was no legal basis for Japan to independently impose sanctions at its own discretion on foreign countries.

Government officials also claimed that Japan could not ban North Korean ships from entering into Japanese ports under the principle of freedom of navigation. But Yoshihide Suga (the former prime minister) and other lawmakers broke through this barrier by taking leadership in enacting revisions to the Foreign Exchange and Foreign Trade Control Act, and passed the Act on Special Measures concerning Prohibition of Entry of Specified Ships into Ports.

As a result, Japan now imposes tougher sanctions on North Korea than required by United Nations Security Council resolutions, exerting pressure on that country to resolve the abductions issue.

The second request is to tackle the issue of historical awareness.

Since the beginning of this year, China has repeatedly made massive misrepresentations regarding the Nanjing Incident and the wartime comfort women issue, asserting that from before the war, Japan perpetrated genocide-like massacres. Commenting on the Japanese government’s expression of serious concern about human rights abuse in the Xinjiang Uyghur autonomous region, Chinese Foreign Ministry spokeswoman Hua Chunying said on March 25, “Japan is evasive on the humanitarian crime of forced recruitment of ‘comfort women’ to this day. Is this how Japan respects human rights?”

She then went on to reiterate the Chinese assertions: “Have they forgotten the 35 million Chinese casualties from the war of Japanese aggression, including the over 300,000 victims of the Nanjing Massacre alone?”

On September 18, a Xinhua commentary asserted that Japan cannot be allowed to whitewash its horrifying crime of the forced recruitment of comfort women, saying the number of comfort women was more than 700,000. In October, the Chinese government fined Japan’s Sony Corporation for advertising its announcement that it would launch a new product on the anniversary of the Marco Polo Bridge Incident, claiming that the advertisement hurt the dignity and interests of China.

The Japan Institute for National Fundamentals will soon publish a policy proposal calling for enhancing Japan’s international public relations structure for historical awareness. The proposal will ask the Kishida administration emphasize the fact that Japan never committed genocide or any other crimes against humanity during the wartime and prewar as a pillar of its public relations on historical awareness.

The issues of human rights and historical awareness are inseparable. Prime Minister Kishida should promptly appoint an assistant to the prime minister in charge of historical awareness, a position that has been established since the Shinzo Abe administration.

(A version of this article was first published by the Japan Institute for National Fundamentals, Speaking Out #852 in English on November 18, and in Japanese on November 15, 2021.)