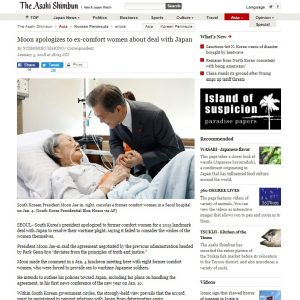 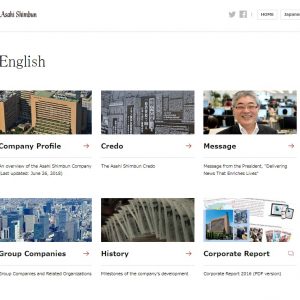 On July 6, a voluntary group intent on ending the bias in reporting on the issue of wartime comfort women met with The Asahi Shimbun at its headquarters in Tsukiji, Tokyo.

The group presented a written request for Asahi to moderate its language on the topic in its English-language editions.

The Asahi Shimbun responded on July 23, rejecting the group’s requests. An English translation of the full text of the newspaper's July 23 response in Japanese is provided below.

The following are our sincere responses to your requests lodged with our newspaper’s president on July 6 under the name of the Voluntary Group Seeking to Have the English Editions of the Asahi Shimbun End Their Manipulative Way of Reporting Vis-à-Vis Public Opinion Regarding the Issue of Wartime “Comfort Women.”

Whenever we write an article, we certainly bear in mind the importance of choosing expressions that are as appropriate as possible, considering the facts of the article. When it comes to which expression to use, we make a point of using our judgment and placing priority on choosing an expression in accordance with the respective circumstances and context concerned.

We have used the expression you pointed out this time, “forced to provide sexual services,” since the outset of the English digital site, of the Asian Peace and Friendship Foundation for Women, better known as the Asian Women’s Fund. Its Japanese version has defined the so-called “wartime comfort women” as “those women who were forced into sexual servitude for Japanese officers and soldiers during a certain period after being assembled to comfort stations of the Japanese military in the wartime past.”

The Asian Women’s Fund was launched in 1995 at the initiative of the administration of then-Prime Minister Tomiichi Murayama, for the purpose of undertaking in “atonement” for former comfort women through donations from the public and financial assistance of the government. Activities of the Asian Women’s Fund have been introduced in the question-and-answer page of Japan’s Foreign Ministry website, too.

The August 4, 1993, statement announced by Chief Cabinet Secretary Yohei Kono, says, “The recruitment of the comfort women was conducted mainly by private recruiters who acted in response to the request of the military. The government study has revealed that in many cases they were recruited against their own will, through coaxing, coercion, etc., and that, at times, administrative/military personnel directly took part in the recruitments. They lived in misery at comfort stations under a coercive atmosphere.”

In a June 20, 2014, press conference, Chief Cabinet Secretary Yoshihide Suga, referring to the government review of the process by which the Kono Statement was developed, said the government “is not thinking of revising the Kono statement.”

The chief government spokesman added, “As shown by a Cabinet decision in 2009 on the government’s written answer on the matter, there has been no change at all in the government stand of continuing to uphold the Kono statement,” which is available at https://www.kantei.go.jp/jp/tyoukanpress/201406/20_p.html.

It can safely be said the Kono statement contains a description that “a coercive atmosphere” existed at the military brothels, and the statement has been kept intact by the successive administrations of Japan up to the current Cabinet of Prime Minister Abe. The Asahi Shimbun, when reporting problems involving the comfort women issue, is determined to maintain a multifaceted approach now and in the future, by continuing to listen to diversified viewpoints and opinions while bearing in mind what stand the government takes in dealing with the matter.

On August 5, 2014, morning edition we published a special feature article publicly retracting all our stories concerning testimonies given by Mr. Seiji Yoshida, after reaching the conclusion that his narratives were entirely fallacious. The online site “Asahi Shimbun digital” has continued carrying that article even now with the URL as follows: http://www.asahi.com/shimbun/3rd/2014080516.pdf.

Although we have currently discontinued publishing English versions of the Asahi Shimbun, an English translation of the August 5, 2014, Japanese-language article can be fully available even now by accessing the URL https://www.asahi.com/articles/SDI201408213563.html of the Asahi Shimbun digital.

In addition, we have sent an English-language summary of a report by an independent committee for the scrutiny of reporting activities of the Asahi Shimbun on the comfort women issue to such organizations as the United Nations headquarters, the U.N. Information Center, U.S. Congress, the U.S. Embassy in Tokyo, the South Korean Embassy in Tokyo and the municipality of Glendale, California.

Views expressed by the comfort women are diversified from person to person and vary at different periods and places and according to wartime circumstances. Therefore, it is difficult to provide a comprehensive assessment of the overall situation in concrete terms.

The Kono statement we cited in response to your request No. 1 referred to “a coercive atmosphere,” while the Asian Women’s Fund website includes the explanation that the women “were forced into sexual servitude.” On top of these, we also have based our articles on depositions by various individuals and findings in studies, the trustworthiness of which has been ascertained through trial records of war criminals and government documents of the Allied Nations. Indications are that part of Japanese troops deployed in such regions under Japan’s wartime occupation as China and Southeast Asia took away local women and others in a forcible manner to make them comfort women.

Regarding the expression of “forced to provide sex,” you have noted that the phrase, when read by a person speaking English as his or her primary language, can most likely leave the impression that those involved were “forced to have sex through physical coercion by the military.” This expression, however, should correctly be taken as signifying they were “subjected to having sex against their own will.”

Each time we write an article on the wartime comfort women issue, we are resolved to choose expressions we think best suited to specific circumstances and contexts, while paying due consideration to human rights and taking into account diverse opinions at home and abroad. In addition, we will consider the accumulation of historical studies relevant to the issue.

For the reasons mentioned above, we have no alternative but to turn down your requests for us to consider changing our use of language in English about comfort women.

Click here to read the Asahi Shimbun's answers to the voluntary group's requests in Japanese.

Click here to read the related JAPAN Forward coverage of this issue in English.