Strategic and Moral Dimensions of the Ukraine Invasion 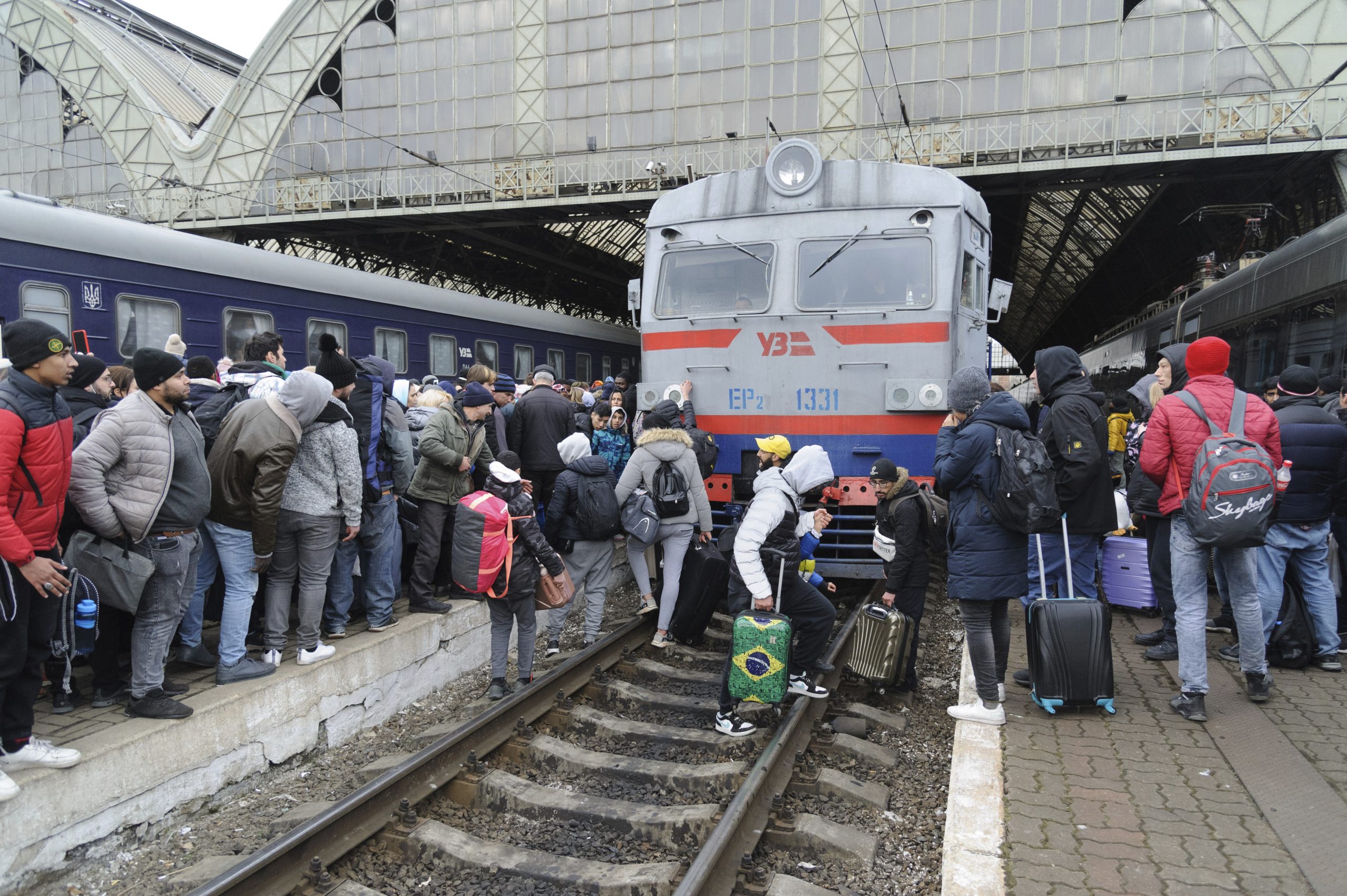 People gather to catch a train and leave Ukraine for neighboring countries, Saturday, Feb. 26, 2022. The U.N. refugee agency says the number was going up fast as Ukrainians grabbed their belongings and rushed to escape from a deadly Russian onslaught. (AP Photo/Mykola Tys)

The strategic crisis created in the 2000s by the Sino-Russian rapprochement has now been brought to another stage.

The Sino-Russian relationship now underlines a host of factors, not least the Nixon Presidency’s skill in exploiting the earlier Sino-Soviet split. More gravely, the degree of the Eurasian heartland pivot toward western Russia, to adopt the terminology of British political geographer Halford Mackinder, remains a core geopolitical challenge.

For Mackinder and others, for example in 1919 for the Imperial General Staff, this challenge was taken further amid concerns about Russia and Germany being allied. And this indeed was to be a key issue in successive crises of the 20th century. Alignment with Hitler enabled both countries to divide up Eastern Europe in a bloody fashion. It was an ultimate appeasement of Nazi Germany, and one that robbed the Soviet system of any claim to moral standing in international relations.

Putin’s calls for the “deNazification” of Ukraine have a richly ironic tone given his past praise for Stalin, who considered peace with Hitler in 1942 and 1943.

The postwar Soviet geopolitical order spanned from the Elbe, where the occupation of East Germany provided a crucial base for armies able to threaten regions from Western Europe to the East China Sea. The Soviet Union under Stalin both supported Mao Zedong’s victory in the Chinese Civil War and encouraged Chinese intervention in the Korean War.

This range made the Soviet Union a particularly challenging geopolitical threat. At the same time it is important to Putin’s worldview. For him, as for many Russians, Russia is either an empire or it is nothing, and Ukraine is the principal obstacle to this pursuit.

This is not a defensive interpretation of Russia’s position. Rather, to Putin it is a matter of necessary imperialism. Putin definitely wants to install a pliant system of government in Ukraine.

This goal is central to Putin’s view of a new European order, not only of territorial change but also of a force-based logic in international relations. Sermons about international law are irrelevant as far as he is concerned. Indeed, the force of contempt that he feels and expresses about a rules-based international order is one that is further engaged by such a response. It is a natural consequence of dictatorial policies, for the consequences of dictatorship are international as well as domestic.

There is a common psychology in Putin’s policies in which restraint, both from within and without is not only not acceptable, but also contemptible. As such, there is an inherent immoral character to his behavior in international relations, however much realists might seek to ignore or circumvent it.

Morality as a context provides us with another approach to the Ukraine crisis and the more general geopolitics of authoritarian versus democratic ideology.

In recent years, and culminating with a cultural takeover of the current times, there is a critique of the West based on its role in Atlantic slavery. This theory is then used as the basis for a set of intellectual and public-activist strategies that serve, directly and indirectly, to call into question Western culture, and more generally to suggest that it is simply a hypocritical value system and therefore of no moral consequence domestically or internationally.

Indeed, the slavery argument provides a key adjunct to a position adopted by those who find all governance deeply flawed. It helps the opponents of Western values by suggesting the West is in some way morally worse.

This is particularly malign in the case of slavery. The account of slavery that is offered relates to the Atlantic slave trade, a terrible period in which over eleven million Africans were enslaved by other Africans, sold to Westerners, and transported in miserable circumstances and to miserable ends to the New World. This was an appalling practice and a stain on the history of Western and African societies of that period.

Somewhat less attention is devoted to the prevalence of slavery today, conservatively estimated as over twenty million people. And even less attention is given to the extent to which there is public slavery in the shape of those brutalized by autocratic states. The acme is North Korea, where the entire population are in effect slaves.

Conquest is a particularly dramatic form of enslavement, and notably so when a democratic country is conquered by another nation. Thus, Putin’s invasion of Ukraine represents a form of enslavement that has moral as well as geopolitical consequences.

It is striking to see the degree to which that is not grasped by Western commentators, who seem to see slavery as only a matter of private ownership. This represents a failure in their assessment of slavery, as well as a flaw in the moral character of international relations, more particularly acknowledging the true meaning of self-determination.

These points provide a key to understanding the justifications employed by Putin. None of his reasons relate to matters of popular consent. Since Putin is also critical of the Soviet presentation of Ukraine, he is obliged to use a historicized ramble through a Russian vision of geopolitics, one that is based on a call to fear.

Jeremy Black, MBE, is British historian, lecturer and prolific author, including “A Short History of War” (Yale University Press, 2021), “Geopolitics and the Quest for Dominance” (Indiana University Press, 2015) and others noted below. The views expressed herein are those of the author alone, and not any publication or institution with which he may be associated.