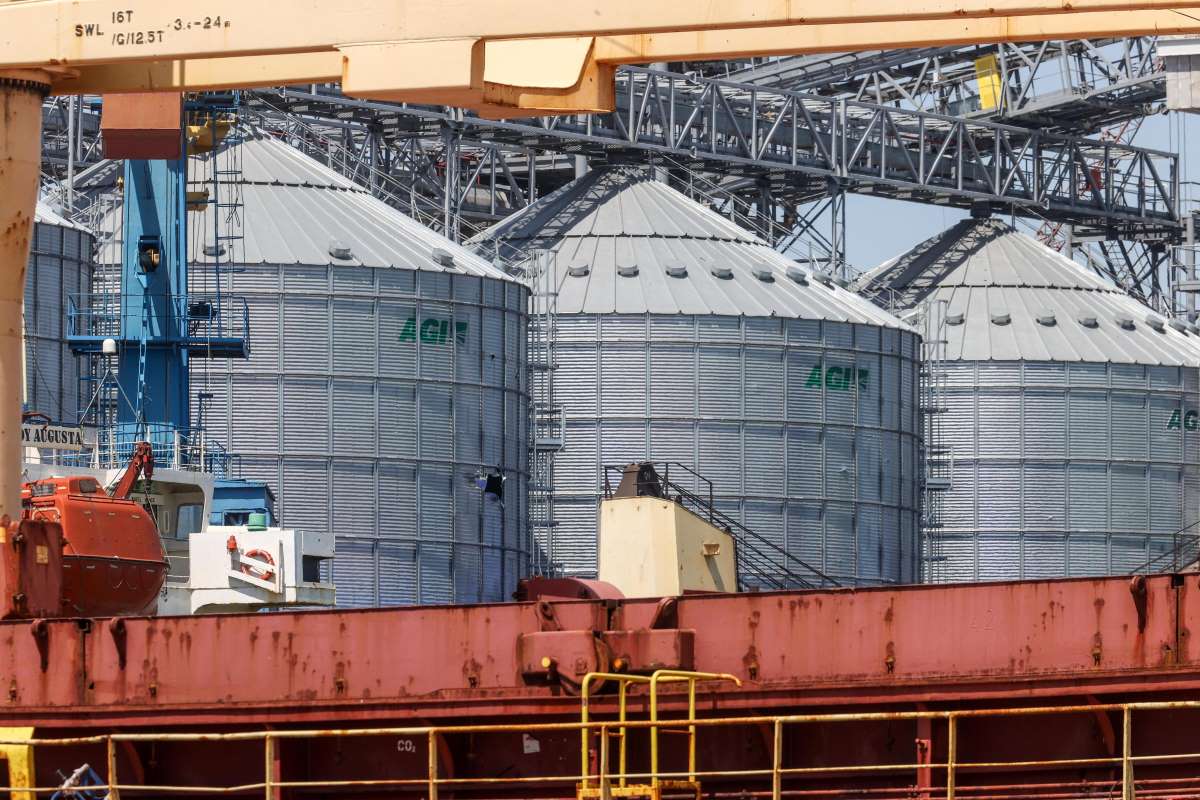 Grain storage tanks in the southeastern port city of Mariupol, Ukraine (May 30, 2022, Tas via Kyodo)

The specter of world hunger looms due to the Russian blockade of normal shipments of Ukrainian grain from Ukrainian Black Sea ports. Finding a substitute route for these exports will be high on the agenda when G7 leaders hold their summit meeting in Germany at the end of June, it was learned on June 9.

According to Japanese government sources, one option being considered by Japan and other G7 members is establishing an alternative export route through Romania. Assistance for countries in the Middle East and Africa that are on the cusp of a food supply crisis is part of what is being mulled, and is likely to be addressed in the summit outcome document.

Ukraine, as a major producer of wheat, corn and other agricultural products, is known as “Europe’s breadbasket.” Before the Russian invasion, one of the primary routes for the country’s grain exports was from the southern port of Odesa (Odessa), and then on through the Black Sea to the Bosporus Strait in Turkey, before exiting to the Mediterranean.

However, due to Russia’s naval blockade and mining of Ukrainian harbors, more than 20 million tons of grain remain stuck in silos and warehouses in Ukraine. Meanwhile, a global shortage of grain is becoming more acute and food prices are soaring.

Russian President Vladimir Putin has declared that he is prepared to facilitate Ukrainian food exports, but only on the condition that the Western nations lift the sanctions they have imposed on Russia for its aggression. Western governments have dismissed the idea as nothing more than posturing on the part of Moscow.

Even if Russia were to end its naval blockade, experts estimate it would take around six months to clear the mines laid by the Russian army. That means the problem is not likely to be resolved quickly.

The World Food Program (WFP) has warned: “Right now, Ukraine’s grain silos are full. At the same time, 44 million people around the world are marching towards starvation.”

Especially hard hit are countries in the Middle East and Africa, which are highly dependent on imports of wheat. There is also concern that supply shortages could trigger political instability in these regions.

With these conditions in mind, the G7 Summit at the end of this month will take up food security as one of its main themes. The G7 is expected to pledge new assistance to Ukraine for the restoration of food-related infrastructure destroyed by the fighting and increase grain storage capacity.

It reportedly will propose creation of “humanitarian corridors for food,” and even call on Russia to participate.

Furthermore, the European Union (EU) is accelerating efforts to establish a route for the transport of Ukrainian grain through neighboring Romania. Among other things, it is working on assistance to facilitate such transport. One complication is that Ukraine uses a different railway track gauge than Romania and other EU members, which necessitates the transfer of cargo to different trains at the border.

Japan is currently considering how to provide food aid to countries in the Mideast and Africa through UN agencies and other channels.

Speaking before the Upper House Budget Committee on May 31, Prime Minister Fumio Kishida said that Japan is paying close attention to various developments in Europe and Ukraine, and considering how Japan can best contribute to alleviating the problem.