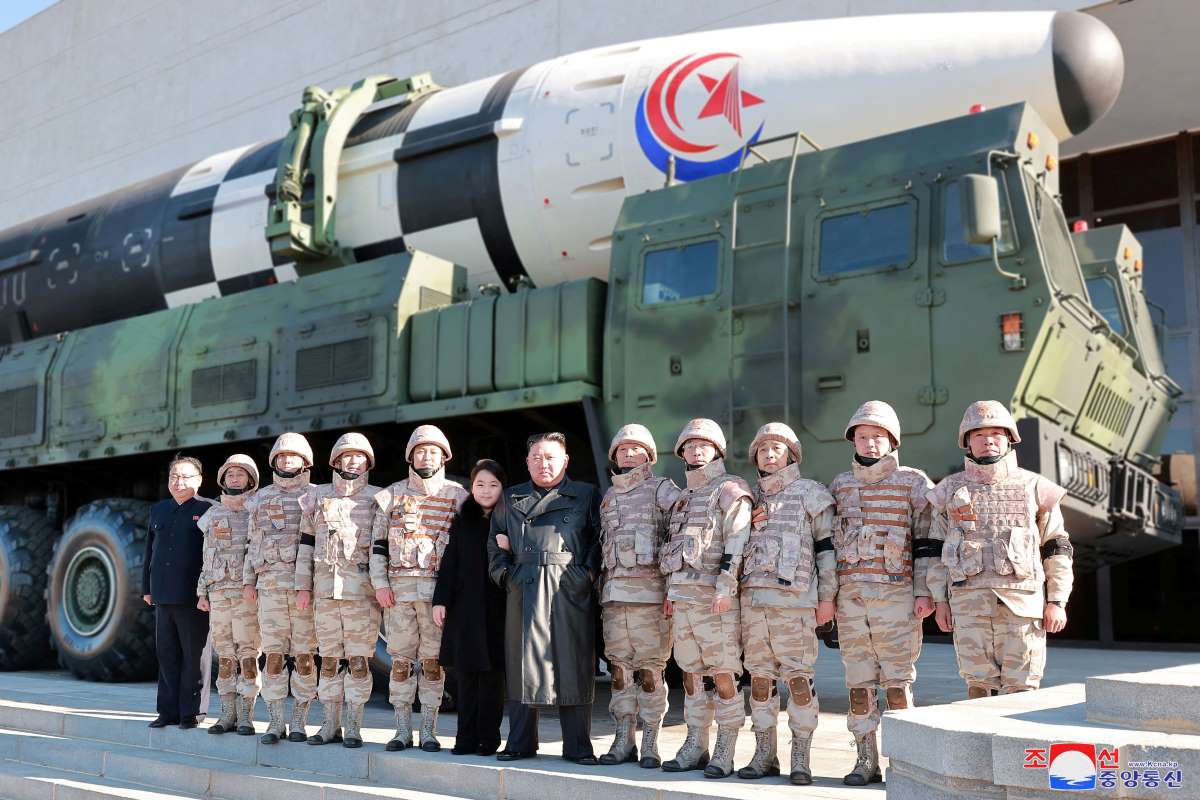 North Korean leader Kim Jong Un and his daughter attend a photo session with scientists, engineers, and military officials involved in the test-fire of the country's new Hwasong-17 intercontinental ballistic missile (ICBM) in this undated photo released on November 27, 2022 by North Korea's Korean Central News Agency. The photo has not been independently verified. (© KCNA via Reuters)

It has been a banner year for missiles. Up to mid-November, Kim Jong Un's regime in North Korea has already fired 63 ballistic missiles in 2022 alone, thereby tossing Northeast Asia's security balance into a tizzy. Adding to the chaos is Pyongyang's endorsement of tactical nuclear weapons.

Earlier, Kim made a declaration in 2021 that his regime had: "undertaken a successful program to miniaturize, lighten, and standardize nuclear weapons, and to make them tactical ones."

He further iterated that North Korea would "continue to make nuclear weapons smaller and lighter for more tactical uses."

In the backdrop of these statements by Kim comes the recent announcement by North Korea's official Korean Central News Agency (KCNA) that all its latest "seven launching drills were conducted by the tactical nuclear operation units." Their statement amply signals that considerable focus in Pyongyang is on testing newer and smaller nuclear warhead designs – known as Tactical Nuclear Weapons (TNWs).

Be it Northeast Asia, or Southern Asia, TNWs add a dangerous dimension to the already precarious strategic equations prevailing in these regions.

The history of nuclear deterrence is replete with instances when TNWs have lowered the nuclear threshold disturbingly. They are inherently destabilizing, and bring complicating elements into any future "limited war scenario."

Other issues associated with TNWs include the complexity of manufacturing, and complications during storage, transportation, and deployment.

A Web of Illicit Acts

While tracing North Korea and Pakistan's illicit nuclear-missile nexus and trade, one finds that Pakistan served as the epicenter of nuclear proliferation during the decade of the 1990s and early 2000s. That is when sensitive WMD technology was supplied to Libya, Iran, and North Korea by the disreputable Pakistani scientist, AQ Khan, through the proscribed nuclear proliferation web operating under his watch.

Moreover, although China declared its support for the principle of non-proliferation in 1982, it nevertheless directly aided Pakistan's nuclear program throughout the 1980s. Beijing went on to become the principal supplier of sensitive nuclear and missile technology to Islamabad.

In the case of Pakistan, the existing security-related perils were amplified when the element of TNWs was introduced by the Pakistan Army's Directorate of Inter-Services Public Relations (ISPR).

Specifically, the short-range (60 kms) nuclear-capable "Hatf-9" missile (Nasr) capable of "… carrying nuclear warheads of appropriate yield, with high accuracy… specially designed to defeat all known anti-tactical missile defense systems," was introduced. This was interpreted as an implicit signal across Southern Asia and beyond of Pakistan's commitment to developing 'full spectrum deterrence, that included the use of TNWs on the battlefield'.

Tactical Nuclear Weapons at the Battlefront

The introduction of TNWs is aimed to counter-balance conventional military capability at the tactical level. Worryingly, the use of TNWs opens a whole new dimension of concerns, especially with respect to the possibility of nuclear escalation. Concerns include both, however, the complex challenges of nuclear escalation and control.

The dangers are enhanced by the number of hands with access to TNWs. These increase the opportunity for unauthorized or accidental launch, particularly in the event of nuclear warheads being mounted on extremely short-range forward deployed ballistic missiles. Ominously, this places Northeast Asia and Southern Asia's security at great risk.

In the case of both Pakistan and North Korea, there is a striking similarity in the valid questions surrounding concrete and verifiable evidence to back their respective claims of the capability to miniaturize a nuclear warhead for fitting onto the specified class of short-/intermediate-range ballistic missile.

What needs to be underscored is that TNWs inherently destabilize. By potentially inviting pre-emption, they disturb nuclear deterrence and widen existential nuclear dangers surrounding their security. In part this is derived from the need for decentralization of authority to commanders in the field at some stage of the conflict.

Besides, any nuclear weapon, of any quality or yield, by any mode of delivery, that is employed against any type of target, would have significant strategic consequences beyond the immediate parties to the conflict.

What North Korea and Pakistan are indulging in by suggesting their intent to possess tactical nuclear weapons and possibly use them shall profoundly increase the geopolitical chaos in Northeast Asia and Southern Asia. The reverberations would be felt across the entire Asian continent and beyond.

Lowering the threshold of nuclear usage to theater level through the likely employment of TNWs is nothing short of nuclear blackmail.

By introducing tactical nuclear weapons operations, Pyongyang is targeting Japan, South Korea, and Northeast Asian security and stability in an unprecedented manner. North Korea's record frequency of missile launches and its apparent installation of tactical nuclear operation units is a critical indicator of the further complicating security discourse in the region.

A perennial apprehension now could be that of a TNWs-induced trigger, that might activate a chain reaction, leading to a regional, or eventual global nuclear crisis.