WATCH: Trains Bring You to Japan’s Famous Sites — at the SCMAGLEV and Railway Park Museum 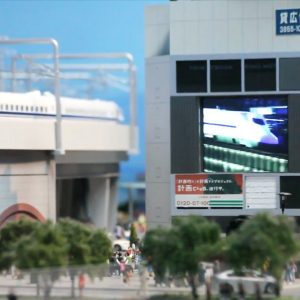 Video 2| WATCH: Travel from Nagoya to Kansai at the SCMAGLEV and Railway Park Museum

Video 3|  WATCH: ‘Near-Realistic Landscapes’, Diorama Has Got Own Digital ATC at SCMAGLEV and Railway Park Museum

Video 4| WATCH: ‘Nightscapes’: The Most Impressive Part of the SCMAGLEV and Railway Park Museum

Best described as a “museum full of memories and dreams,” the SCMAGLEV and Railway Park (Kinjofuto, Minato-ku, Nagoya) is attracting visitors with its railroad diorama — the largest model built in Japan.

The museum showcases bullet trains and the most up-to-date Superconducting Magnetically Levitated Vehicles (Maglev). The grand diorama project, which opened in 2011, took two years to plan and design, and another year to build.

The exquisite diorama is introduced in four video segments.

The first video, Traveling from Tokyo to Nagoya, introduces incredibly realistic reproductions. They include the famous sights of Japan’s main gateway, Tokyo Station, the Parliament (Diet) Building, Yokohama’s Chinatown, the Hakone Ekiden Marathon scene (the biggest sporting event during New Year’s), the tea plantations of Shizuoka, and models of giraffes and monkeys at the Higashiyama Zoo in Nagoya.

A miniature bullet train belts its way from the Tokyo to Nagoya stations, with Japan’s symbol, Mount Fuji, proudly displayed in the background.

Approximately 70 different trains made from 450 train cars, in the form of both bullet trains and conventional lines, run through the diorama, which measures at 220 square meters in total area size.

Seven railway lines — including the Yamanashi Linear Test Line, Tokaido Shinkansen Line, and the Chuo Line — are displayed, the total length of train rails measuring up to one kilometer long.

Although numerous trains are operated simultaneously, there is a reason why they never collide.

A person in charge of the exhibit explained: “A digitally operated system was developed for the diorama. The system allows several trains to run on the same line at once, but each train can be freely maneuvered. The first ever attempt in Japan, the system’s operation is modeled after an actual railway’s digital ATC system (digital automatic train control system), therefore, the automatic brake function is applied when trains come too close to one another.”

The vast number of meticulously designed infrastructure and building models — some with windows showcasing silhouettes of people through them — are magnificent themselves. Visitors can see around 500 buildings, ranging from the Tokyo Tower, Tokyo SKYTREE, and other skyscrapers, to ancient pit dwelling houses and historical landmarks in Nara and Kyoto. There are 25,000 human figures with delicate features and 300 automobiles as part of the display.

By utilizing lighting, video, and acoustic techniques, a “Day in the Life of The Railway” is elaborately exhibited in a 20-minute show shown 14 times per day in the diorama room. The lighting and acoustic choreography is programed to operate in coordination with the digital system cited above.

The concept, shared by the planners and designers of the diorama site which knocks the socks off of those who see the exhibition, is just as stunning.

“This is something Japan has never seen before. Although the diorama is a very large-scale project, it is also highly complex. We not only wanted to illustrate the railway system itself, but the intention is to also introduce the landscapes and activities of people who are the backbone supporters of railways in Japan,” said the person in charge.

Where: Two-minute walk from Kinjofuto Station on the Aonami Line from Nagoya Station.

Admission fee: 1000 yen for adults, 500 yen for students, and 200 yen for children under elementary school and over age 3.

Closed: on Tuesdays (when a National Holiday falls on a Tuesday, the museum will be closed the following day) and during the New Years’ holiday from Dec 28th to Jan 1st.