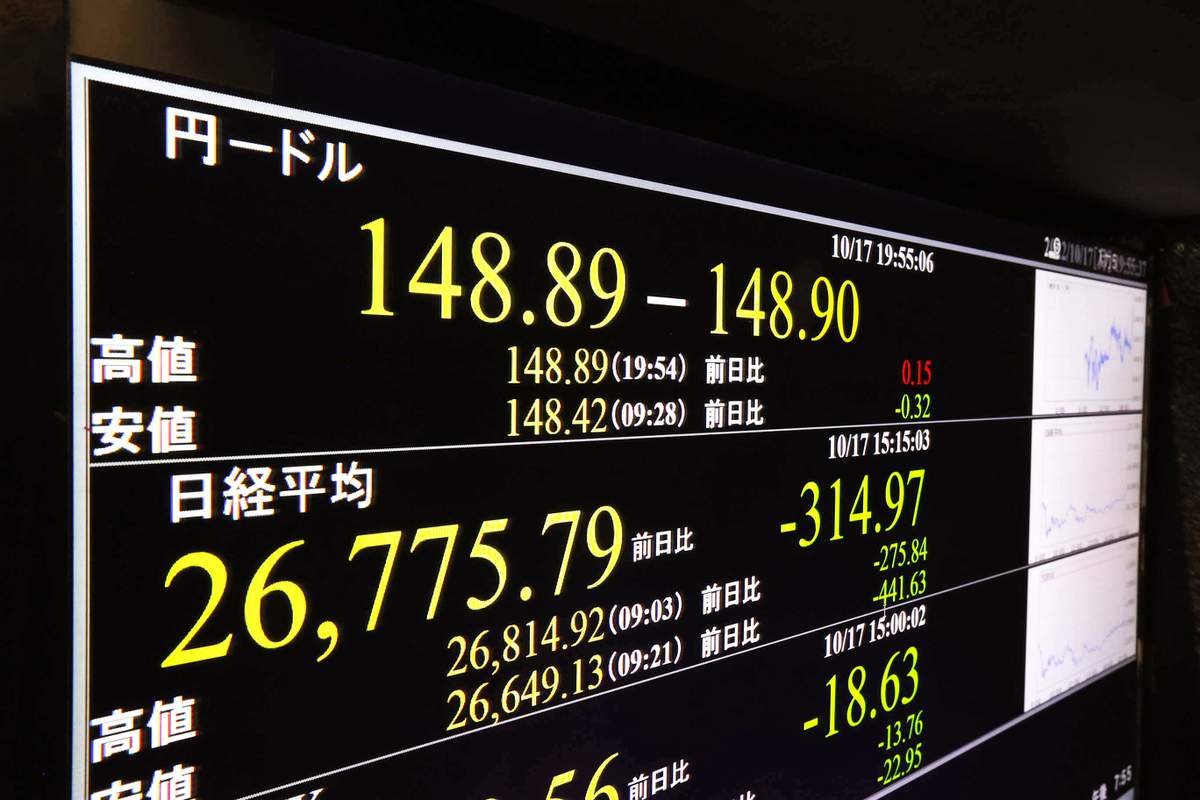 A monitor showing the yen exchange rate, which temporarily dropped to ￥148.89 to the dollar on the evening of October 17, 2022 in Higashi-Shinbashi, Tokyo.

A Japanese economic term has lately been a thorn in my side, and that is "bad yen depreciation." Using terms denoting value judgments to describe the weak yen should be avoided, least of all when discussing policy.

Exchange Rates Should be Determined by Market Mechanisms

To be fair, it's not difficult to understand why people are tempted to call it "bad yen depreciation." A weak yen means a loss in the purchasing power of the Japanese people, which has caused great difficulties in the livelihoods of many people. And given the widening interest rate gap between Japan and the United States, the trend is not likely to stop anytime soon.

That said, it would be outlandish to demand the Bank of Japan (BOJ) raise interest rates immediately. The main objective of the current monetary policy is to end deflation. Although the price index has stayed above the BOJ's 2% target, it is highly doubtful that this is a sustainable trend that could lead to wage increases.

The effectiveness of BOJ Governor Haruhiko Kuroda's monetary easing, now in its 10th year, will need to be scrutinized anew. At any rate, changing monetary policy for the sake of short-term exchange rates is out of the question.

Japan's financial authorities intervened in the exchange rate market on September 22. But this, too, is no panacea. Exchange rates should be determined solely by market mechanisms. Intervention can stop sudden movements, but it should not be considered powerful enough to move the entire market.

Weak Yen a Tailwind for Some, a Heavy Burden for Others

To begin with, market mechanisms are always followed by tears and laughter. The weak yen is a tailwind for the export industry. At the same time, it is a heavy burden for the import industry. While some are troubled by the rising price of imported wine, it presents an opportunity for domestic wine producers. The key question is how to take advantage of the weak yen.

It can be said that the current exchange rate is 70% due to the strong dollar and 30% due to the weak yen. The US drastically tightened its monetary policy by raising the interest rate by 0.75% for the third time in a row. This has caused the dollar to appreciate against almost all currencies. Although it was meant to curb the raging US inflation, which has climbed 8% year-on-year, it will undoubtedly slow down the global economy. The dollar's isolated rise will eventually peak.

Exchange rates are determined by the power relations between currencies. There is no fair value or "theoretical value," and sometimes it can get out of hand. For example, something could trigger a massive sell-off of a particular currency. Investor sentiment becomes hysterical when the market is unstable, as it is now, and could even lead to behavior comparable to bullying.

When the United Kingdom's Liz Truss administration announced its tax plan last month, it was hit by a sharp sell-off of British bonds and a weakening pound. When faced with this kind of "bullying," the first thing to do is to pretend that it doesn't hurt.

The Truss administration quickly retracted the tax cut plan. But I wonder what would have happened if it had reacted with ham-fisted resistance? Fighting a runaway market should always be avoided.

What policies, then, should the Japanese government adopt? While it won't be easy to stem the widening interest rate gap between the yen and the dollar, it's crucial to steadily reduce yen-selling driven by actual demand.

The trade deficit in August reached ¥2.8 trillion JPY (about $19.7 billion USD) in a single month. This is because the prices of fossil fuels such as crude oil, liquefied natural gas (LNG), and coal have doubled or tripled compared to the previous year. The greater the trade deficit, the stronger the drive to sell the yen and buy the dollar.

So what steps can be taken to improve the balance of payments? An obvious first step is to increase exports. Thanks in part to the weak yen, Japanese exports are currently strong, reaching ￥8 trillion yen (about $55 billion USD) per month. In terms of products, exports of steel and semiconductor manufacturing equipment are growing. However, exports of automobiles need a little more work.

The problem is that imports are increasing at a faster rate than exports. It follows that the second step is to reduce the use of fossil fuels. Using more renewable energy is also in line with the mid-to-long term goal of decarbonization.

Moreover, Japan needs to urgently restart its nuclear plants. Fully operated nuclear plants would significantly reduce Japan's LNG consumption. In turn, the LNG could then be sent to countries in Europe that are rushing to "de-Russianize" their energy sources.

Hopes are high for an increase in overseas visitors following the relaxation of border restrictions in October. Before the COVID-19 pandemic brought a complete halt to inbound tourism, the number of overseas visitors peaked at 31.88 million in 2019. Japan's travel balance for that year was a surplus of ￥2.7 trillion JPY (about $18.5 USD).

Expanding consumer spending through increased inbound travel would be the most obvious way to leverage a weaker yen. A vacation in Japan at an exchange rate of 140 yen to the dollar is a bargain, so to speak. Tourists who enjoy an inexpensive holiday in Japan could become repeat visitors, which will help recover the tourism industry from the ravages of the pandemic.

It is useless to complain about a "bad yen depreciation." Discussions need to turn instead to how Japan can seize the moment to leverage the weak yen.