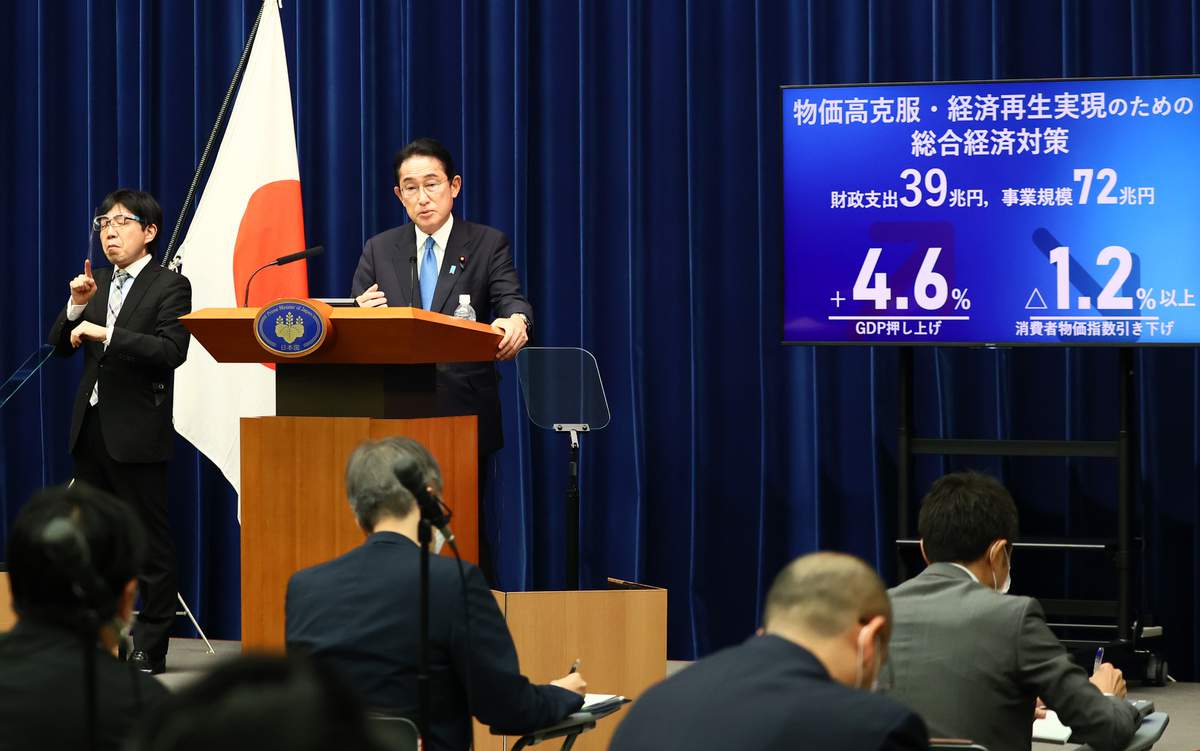 Fumio Kishida unveils economic package to be approved by the end of 2022. (© Sankei)

"We are introducing measures so that we can avoid a scenario of 10% inflation, the likes which we are seeing in Europe and the United States." These were the words of Prime Minister Fumio Kishida as he introduced the government's latest proposed economic package to journalists in the evening of October 28.

The measures, approved at a special meeting of the Cabinet on October 28, include initiatives to suppress inflation by approximately 1.2%, and boost economic growth to the level of 4.6% in 2023.

Earlier in the day the level of inflation was announced at 3.4%, the highest level in 40 years.

Kishida also announced a draft for comprehensive economic initiatives to tackle the increased cost of living and jump start his trademark policy of a "new form of capitalism."

The package is equivalent to a total of ￥39 trillion JPY (approximately $294 billion USD). It includes an additional batch of supplemental spending of ￥29.1 trillion JPY ($198 million USD) destined to support the economy among rising costs, rising inflation and a weak economy. The stimulus approval is set to be debated in the National Diet in December.

We unpack some of the major points below.

To help out with the rising cost of energy, the government budgeted the biggest portion of the supplemental budget to soften the blow of the rising costs of living.

These comprise approximately ￥6 trillion JPY ($40 billion USD), and items in the include:

Support for Families with Children

Financial support for the Kodomo Shokudo system was also included in this category. Roughly translated as "Kids Cafeteria", they are community driven establishments which provide free or cheap meals to families with children.

In order to support the companies in an economy bruised by COVID-19, the government is also allocating further stimulus funds to boost the travel and entertainment industry.

For example, there are travel coupons covering up to ￥44,000 JPY ($300 USD) per night for a four-person family, and 20% discounts for cinema and theme park entry tickets.

The framework also includes financial support for small to medium size businesses that suffered economically during the pandemic.

Kishida stressed that spring 2023 will be a key period in order "to achieve an increase in wages, and attain the virtuous cycle of economic growth."

To that end, the prime minister included a budget of ￥1 trillion JPY ($6 billion USD) for retraining current workers in new skills.


Making the Most of the Weak Yen

Part of the economic package addressed the trend of the decreasing value of the yen, which reached 151 to the US dollar earlier in October, the lowest level in 32 years.

The economic package seeks to increase the competitiveness of several Japanese goods. In doing so, experts believe exports could contribute to the appreciation of the yen.

Investment in sectors such as semiconductor production and agriculture are targeted in the package, with the specific aim to boost exports from Japan and stabilize supply chains for products.

To incentivize visitors coming to Japan, the package plans to allocate ￥5 trillion JPY ($33 billion USD) in infrastructure dedicated to the travel industry. This includes grants to help inns and other accommodations update their facilities and market the localities.

Following Kishida's flagship idea of "new form of capitalism", the prime minister gave some fresh indications of the spending he envisions to boost economic growth.

The basic aim is that of investing in four areas in order to modernize the economy:

In the start up category, for example, the government plans to introduce exchanges with Silicon Valley in the United States, and ultimately increase the number of startups by 10 times over a period of five years.

The proposed steps also aim to inject investment in next-generation technologies, such as robotics, for a total of approximately ￥3 trillion JPY ($20 billion USD).

While some initiatives are already being implemented, the cumulative spending package is set to be approved by the end of 2022.