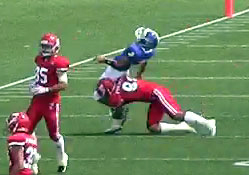 The illegal, dangerous tackle by Nihon University’s American football team member during a regular intercollegiate game against Kwansei Gakuin University in early May tarnished the integrity of sports. But it isn’t just that. Nihon University’s response in dealing with the incident was deplorable.

In recent years, there have been widening calls for better compliance with rules and regulations and improvements in crisis management in the wake of a succession of corporate scandals. Moreover, Nihon University has its own College of Risk Management – which includes crisis management studies – so why didn’t they use it?

The essence of Nihon University’s failures can be viewed from three angles.

Be Prepared for the Worst

The key to crisis management is to first consider the worst-case scenario and then figure out what should be done to avert it. Many people, however, are prone to assuming a problem won’t grow into something worse. That was precisely the case with Nihon University.

Shortly after the nasty tackle incident, many suggested that the vicious violation of American football rules might have been at the behest of Nihon University’s head and assistant coaches, both of whom have since resigned. Notwithstanding this suspicion, Nihon University continued arguing there had been “a disparity between what the coaches said in the huddle and what the player in question thought they meant.” The nuance was that the player should be blamed for misunderstanding the instructions of the coaches.

The former head coach for Nihon University’s American football team was an autocratic presence no player could defy. As a consequence, the university might have thought their initial explanation was enough to overcome the crisis. It was a gross misjudgment.

The wind changed abruptly on May 22 when the Nihon University player who made the illegal tackle held a press conference in which he apologized and clarified in detail the instructions given by the coaches. He aroused public sympathy for his comportment in stepping forward and for saying it could not be a true apology without revealing all the facts.

The next day, Nihon University’s head and assistant coaches jointly held their own press conference, again denying the player’s allegations that their instructions contravened the rules. However, it is self-evident which of the two sides—the player or the coaches—the public believed.

Effective response to a crisis requires speed, above all. The troublesome fire will only intensify if left unattended. Nonetheless, the university ended up pouring oil on its fire, instead of extinguishing it.

First, the university’s apology to Kwansei Gakuin and its response to questions about the fiasco were both too slow. In addition, former Nihon University head coach Masato Uchida wore a pink necktie when he finally visited Kwansei Gakuin University to apologize. He then made the further blunder of mistakenly calling the university “Kansai Gakuin” instead of by its correct name, Kwansei Gakuin. Admitting that pink is a Nihon University symbol, still, the color can hardly be considered appropriate for such a somber occasion. Wasn’t there anybody available to advise him?

Second, in crisis management, the decorum of apology at a press conference is critically important. Advance preparations should include anticipating questions, preparing answers, and rehearsing how to convey your information. Dress should be conservative and appropriate to the industry, and neckties with loud colors or patterns should be avoided. Sufficient attention must also be given to the proper posture for bowing.

The Nihon University coaches, however, were obviously ill-prepared to go before the press. As a result, the poor handling of the press conference by the moderator from the university’s public relations department stood out.

Third, several times the moderator tried to end the press conference, claiming that the same questions were simply being repeated. When some reporters pointed out that his behavior was denigrating the reputation of Nihon University, he blurted out, “It is not denigrating!”

The scene recalled an outburst by the president of a scandal-stricken food processing firm who once said, “I am not sleeping!” in a similar situation, and the time the proprietress of an exclusive Japanese restaurant whispered into the ear of her son while he was apologizing in front of news cameras. However, the Nihon University moderator’s emotional outburst in a press conference intended to convey the university’s sincere apology was undoubtedly the worst.

Noteworthy in contrast is the case of former Osaka mayor Toru Hashimoto, who once held a press conference that went on until midnight, saying he was ready to answer any questions with no time limit.

Boss on the Run?

Whoever is at the top of the organization must take responsibility for crisis management.

The organization should have a crisis management plan in place to identify trouble when it arises and deal with it quickly. There should be recognition that acceptance of the risk of some damage may be necessary in order to stop escalation of the problem and prompt action should be initiated to prevent secondary injury to the organization. Above all, though, the head of the organization cannot run away from responsibility when trouble occurs.

Hidetoshi Tanaka, board chairman of the giant Nihon University organization, has not held a press conference since the outbreak of this crisis. Though he heads the institution, he has not appeared, apart from meetings inside the university. He has made no public apology and has not taken any responsibility for the fiasco. Such being the case, there is no choice but to view him has having shirked his organizational responsibility in this crisis.

Nihon University did establish a committee comprised of seven lawyers from outside the university to investigate the current issue. It plans to hold hearings and conduct interviews, among other tasks, and is expected to issue a report on the issue in late July.

However, the Kantoh Collegiate American Football Association has already finished its review of the incident and imposed penalties, including a ban for life on the former Nihon University head coach and assistant coach for instructing the player to make the illegal tackle. What is the Nihon University-launched committee going to probe and report on at this stage? The university has fallen behind the curve in this respect, too.

The prestige of Nihon University has plunged alarmingly as a consequence, which is likely to adversely affect the job hunting success of its students as well as prospects for new students. The incident has become a rare example of institutional failure in crisis management.

The belatedly-launched third party committee would be better advised to look into these aspects of the crisis, rather than re-investigate its already elucidated causes. In any event, studies of the fiasco will certainly become precious teaching material for Nihon University’s curriculum in crisis management.

Koichi Shikama is an editorial writer for The Sankei Shimbun.