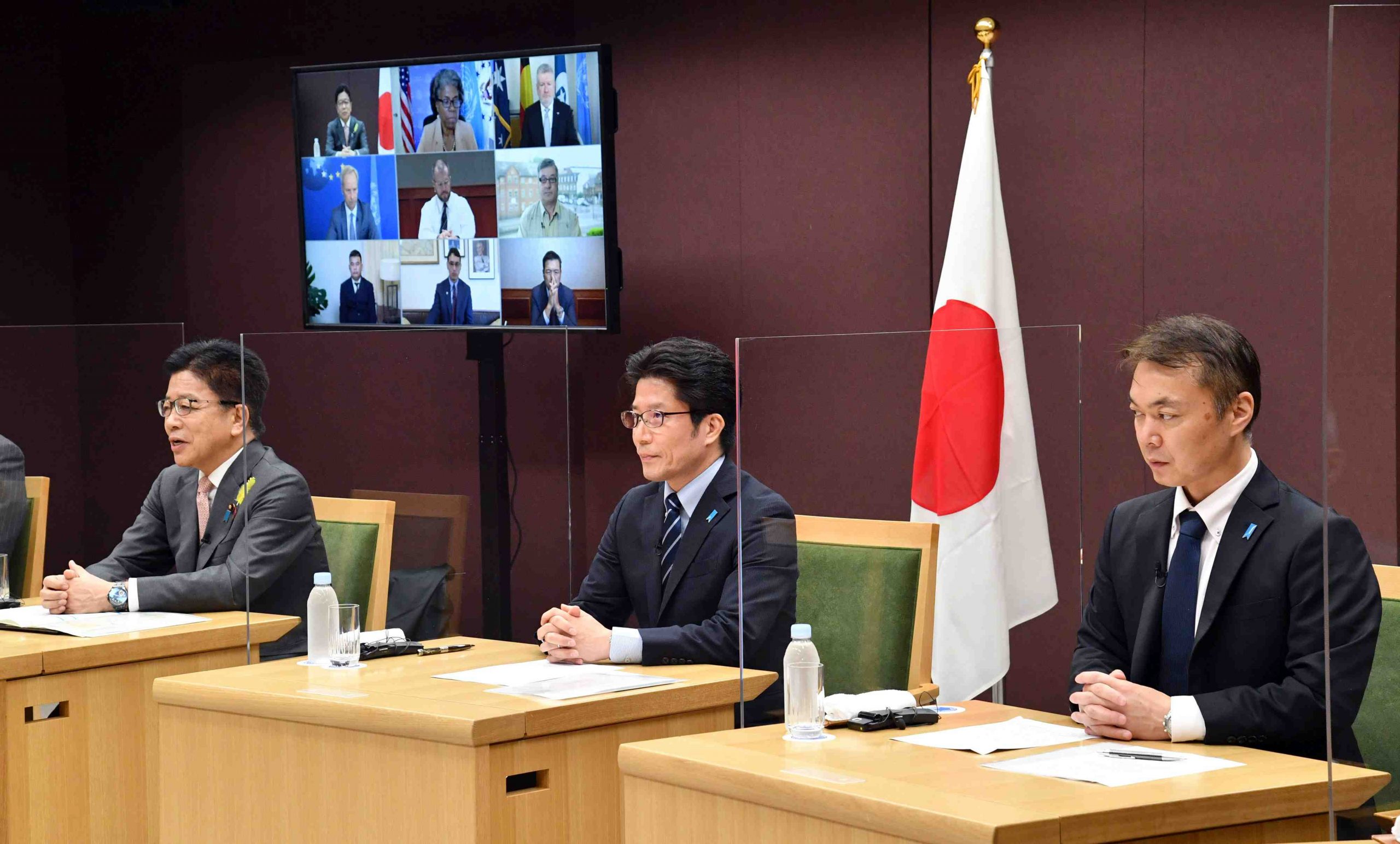 June 29, 2021 online international symposium in the UN on the abductions issue.

What is a way forward for the relationship between Japan and North Korea?

This was the underlying theme of the Online Symposium in the UN on the Abductions Issue on June 29.

Without exception, the victims’ families want action, before they and their loved ones who are detained in North Korea become too old to see each other again. “It is important to take actions actively as a responsible sovereign nation” stressed Mr. YOKOTA Takuya, Secretary-General of the Association of Families of Victims Kidnapped by North Korea (AFVKN), adding “We must stop North Korea’s outrageous acts.”

“Is the government really serious about getting them back?” asked Ms. UEMURA Mitsuko, whose daughter Rumi’s disappearance in 1995 is thought to be presumably related to the abductions by North Korea.

More than 40 years have passed, and the frustration was evident among the family members representing victims from Japan, the United States, Romania and Thailand.

“My 85 years old mother is exhausted,” said Mr. Yokota, pleading for action to bring his sister home. His father passed away last year, without seeing his daughter whose return he had expected for more than 40 years.

This June, a firm resolution was demonstrated by the ambassadors of the co-hosting nations, the Government of Australia, Japan, the United States, and the European Union. In a refreshing lift, the symposium succeeded in raising a few new ideas on bringing the international community together to resolve the abductions issue.

Permanent Representative of the United States to the UN, Ambassador Linda Thomas-Greenfield called upon North Korea to “release these individuals and allow them to leave North Korea . . . the DPRK (Democratic People’s Republic of Korea) must release full information about them now, without further delay,” while Permanent Representative － Head of the EU Delegation to the UN, Ambassador Olof Skoog emphasized that the international abductions are “completely unacceptable on the international level”. He said “Japan can share this issue with so many others”, also referring to victims from many other countries, including more than 500 Koreans who are abductees.

Permanent Representative of Australia to the UN, Mitch Fifield broadly included the concerns of countries with shared values on human rights while referring to the 2014 report of the Commision of Inquiry on human rights in North Korea, led by former High Court Justice of Australia Michael Kirby, which found the abductions to be crimes against humanity.

Cases of the abductions of Japanese and other foreigners by agents of the North Korean regime have continued for over four decades. While a handful of abductees returned to Japan in 2002 after then-Japanese Prime Minister KOIZUMI Junichiro visited Pyongyang, the vast majority of victims remain in North Korea, forbidden from any contact with their families or the outside world.

The theme that the time for action has come reverberated among the family representatives participating from Japan, the U.S., Romania and Thailand.

Mr. IIZUKA Koichiro’s mother was abducted when he was only 1 year old, but North Korea denied her abduction until September 2002, when then-PM Koizumi met then-North Korean leader Kim Jong Il in Pyongyang. Years of attempts at dialogue since then have yielded no progress

Mr. Iizuka would like to see an end to this circular approach with no results. He said “Now is the time for the North Korean leader to make the decision to immediately return all abductees, and to pave the way for a new and brighter future”. However, he warned the families will not compromise.

“Our loved ones have been under the strict control of the North Korean government for 40 years,” said Mr. YOKOTA Takuya. He called on Chairman Kim Jong Un to resolve the abductions issue and return home the victims immediately.

Perspectives Worthy of Another Look

The economy is a key, explained Professor of Nanzan University Dr. HIRAIWA Shunji , discussing how to get North Korea back to dialogue on the nuclear, missile and abductions issue.

This has not been ignored by the Japanese government. Chief Cabinet Secretary and Minister in Charge of the Abduction Issue KATO Katsunobu said the abductions issue is a “critical issue concerning the sovereignty of Japan,” emphasizing return of the victims, along with settlement of the nuclear and missile issues along the lines of the Pyongyang Declaration would open the door for development of North Korea’s economy and resolution of issues in the two countries’ unfortunate past.

A key question is how to engage North Korea to get there.

Mr. Frank Jannuzi, President and CEO of the Maureen and Mike Mansfield Foundation and a longtime associate of U.S. President Joe Biden, emphasized the Biden Administration was looking for the “sweet spot” between failed initiatives in the past and would be a good partner in “trying to bring peace, denuclearization and human rights to the Korean Peninsula”.

More than isolated incidents, the abductions were “part of a systematic state policy, the chain of command going up to the Kim family,” explained expert and former South Korean human rights envoy, Mr. Lee Jung Hoon, picking up points raised by Australian Ambassador Fifield and other co-hosts.

Citing the continuing crime of the abductions and other atrocities, Professor Lee pointed out that actions of North Korea clearly violate a number of international treaties to which it is a party, and the international community should hold them fully responsible for compliance. Indeed, Lee’s human rights expertise and sense of global responsibility set him apart as he brought together the North’s obligations under international law with ideas that haven’t been fully tested in the past.

This, he suggests, is where the focus should move next, as a step with the potential to move the international community toward resolution of the abductions and other human rights abuses in North Korea. Considering the lives and humanitarian values at stake, it is worth a try.

And Professor of Osaka School of International Public Policy, Osaka University HOSHINO Toshiya, master of ceremonies for the event, noted in his wrap-up that the return of the abductees and the early realization of their return must be firmly incorporated in the process of searching for “sweet spot”.