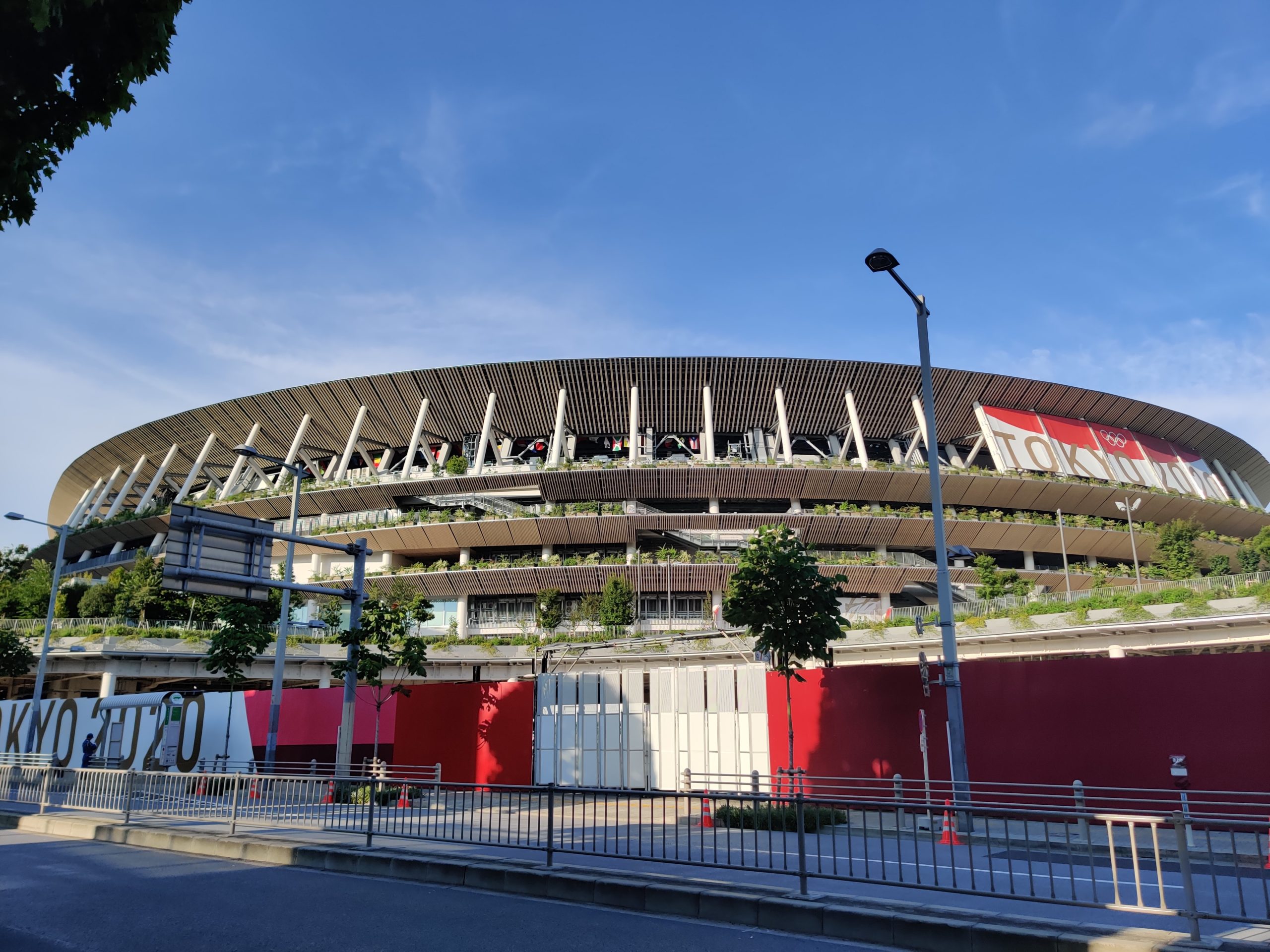 How do you get in the mood for the Olympics during a pandemic?

Tokyo, the capital of Japan, has been under a state of emergency since July 8. This means that, unlike European countries that have started allowing fans physically at sports events, Japan has opted to hold the Tokyo 2020 Olympic Games almost completely without spectators.

For the opening ceremony on Friday night, July 23, only 11,000 athletes and 900 dignitaries will be in attendance at the Olympic Stadium, which was designed for a capacity of 68,000 people.

Yet, despite the circumstances, this didn’t stop many people from getting out to enjoy the somewhat festive atmosphere.

The capital was crowded, with many happy families staying in town for the four-day weekend that started Thursday, July 22, and they were all trying to make memories for this historical edition of the Games.

To kick off the day, at 12.40 P.M., the Blue Impulse planes flew over the capital, and drew the five Olympics circles in the sky. (RELATED: Olympic Colors in the Skies: Blue Impulse Flies Ahead of the Tokyo 2020 Opening Ceremony)

Thereafter, I grabbed my bicycle, and set off to find out what the mood was going to be around the Olympic Stadium. There was a palpable mood of excitement, despite the pandemic.

“See, honey, this is the Olympic Stadium,” said a mother to her daughter.

Surrounding reactions also made it clear that this was an unusual Olympics.

“Oh, you see that it still says Tokyo 2020? I guess they left it as it was from last year,” commented a young woman walking past.

Hundreds of people had converged on the neighborhood around the stadium, from Sendagaya Station to the road leading to the venue. They just wanted to get a feel of the celebration that was about to take place, to see the stadium with their own eyes, to take a picture with their loved ones.

Many didn’t linger. Traffic was closed on all the surrounding roads, and only some sidewalks were accessible for pedestrians.

Policemen lined the stadium, and shouted out on megaphones, “Please don’t stop! Take your pictures and keep walking.”

“I came from Iwate prefecture,” said Akari Sato, who is 70 and lives in Northeast Japan. “I took the Shinkansen (bullet train) here. I wanted to have a memory of this day.” He explained that he had some memory of the past Olympic Games in Tokyo, in 1964.

“I do remember them, but at the time I was working and I could only see them on TV. The stadium was also different. This time, I wanted to see it with my own eyes,” he said.

Sato was not the only one who had come from far away. Chiyoko Takasaki, in her 80s, came all the way from Kumamoto. She was accompanied by her Tokyo-resident son.

“I thought to myself, this might be the last chance I get to see a glimpse of the Olympics in my home country, so I came here,” she said.

“This is a once in a lifetime opportunity”, said Akie Sato, in her 50s, who was accompanied by her son, a university student. “It’s obviously not as exciting because of COVID, but I still wanted to come here and take a picture.”

Among the many families who came to the area around the Olympic Stadium was Takashi Miyake, 50, and his wife and daughter.

“We live around here, so we wanted to have a look around, before it gets too crowded”, he said, beaming, while wiping the sweat off of his neck with a tenugui towel. “We thought it would be a lot better to get a feeling from the ground.”

When I asked him what his plans were for watching the Olympics, he said: “Of course, I plan to watch the opening ceremony on TV with my family. I think the mood will pick up once the Games start. I am really looking forward to it!”

Finally, perhaps the most heartwarming conversation was with a family of four from the Hiyoshi area of Tokyo. While the father took pictures, I spoke to Chiharu Kato and her two daughters, Chika (14) and Ayaka (11), who are middle and elementary school students, respectively.

Chika was taking pictures with a professional camera and told me happily, “The stadium is so much larger than I imagined it, and there is greenery, it’s really beautiful.”

When asked why she had decided to come to the Olympic Stadium on this day, Chika replied: “I came here because I wanted to take pictures, and have good memories for this day.”

“I wanted to absolutely make sure that I gave my kids a feeling of this location,” explained Chiharu. “Ayaka was supposed to go see an Olympic Rugby match because her school was invited to watch it.” But then, the matches were all closed to spectators, including the students at Ayaka’s school. Ayaka commented that “I was really disappointed I couldn’t go.”

Across the board, all respondents had very warm messages for the athletes coming from abroad.

But the warmest response was from Kato, who paused, then said: “I think that everyone was worried because of COVID-19. But in reality, we all wanted to welcome the athletes more warmly, be it at the opening ceremony, the matches, or the host towns.”

“This of course isn’t possible [due to COVID], but athletes don’t have any fault in this. I hope that somehow they enjoy it, and they leave with the feeling that they like Japan!” said Kato.

I left the stadium as it was nearly sunset, and it finally sank in: the Tokyo 2020 Games are upon us, and they won’t be the least exciting!