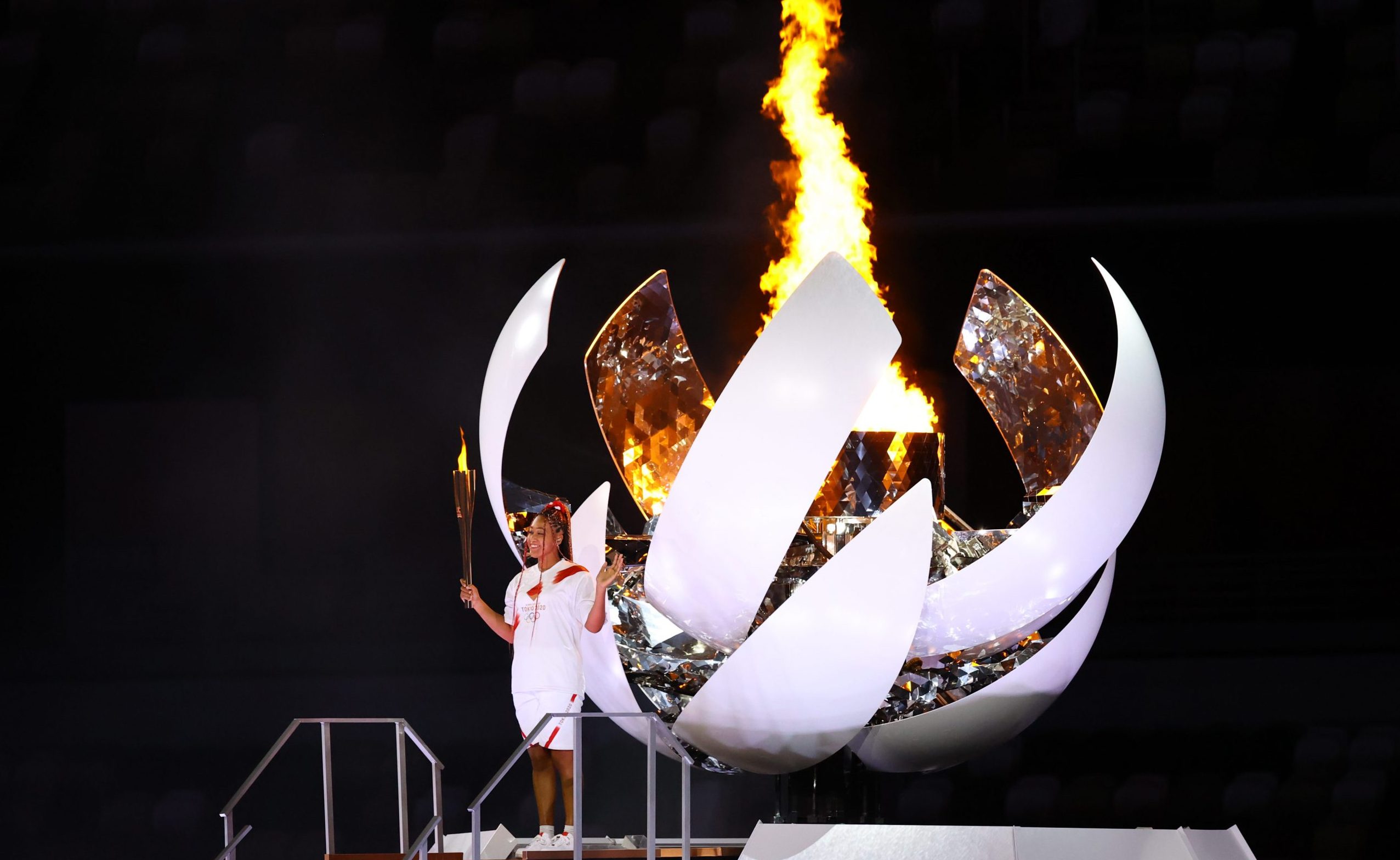 The world came together, despite the challenge of the global COVID-19 pandemic, to usher in the delayed Tokyo Olympics, a year minus a day from the originally scheduled Opening Ceremony.

The festivities brought together Olympians from Mauritania and Micronesia, Estonia and Ethiopia, Poland and Peru, Lithuania and Laos and every other geographical cross section of earth under the same sky on the same night, Friday, July 23 at the New National Stadium.

In the end, of course, it was Japan’s night.

More specifically, it was tennis icon Naomi Osaka’s night, after being chosen to light the Olympic cauldron and cap a night celebrating the human spirit and ties that bind us.

The four-time Grand Slam women’s singles champion slowly walked up the steps to the cauldron and lit it, with the bright flame engulfing the cauldron. The Japanese-Haitian superstar then turned around and lifted the Olympic torch high above her head.

And once more, for the fourth and final time, fireworks lit up the night at 11:49 p.m.

The 23-year-old Osaka tweeted about the memorable night shortly after 1 a.m.

Other Luminaries in Ceremony’s Final Stretch

Several others also were a part of the final Olympic flame procession, including Paralympic wheelchair marathoner Wakako Tsuchida, followed by six students from Miyagi, Iwate and Fukushima prefectures.

Earlier in the day, the Olympic flame arrived at the Tokyo Metropolitan Government Building in Tokyo’s Shibuya Ward, the penultimate stop on a 47-prefecture journey featuring 10,000 runners that began on March 25, starting at the J-Village National Training Center in Fukushima Prefecture.

The Opening Ceremony is a unique celebration of the entire world, with athletes dressed in traditional and contemporary attire from all corners of the globe. Each nation had its  moment in the spotlight.

In total, 11,000 athletes from 205 nations and 900 dignitaries attended the scaled-down Opening Ceremony. (Citing COVID-19 concerns, North Korea announced in April that it would skip the Olympics, making it the only nation to do so.)

As scripted, Japan had more of those big moments, though.

At 10:32 p.m., Yui Susaki, a 22-year-old from Matsudo, Chiba Prefecture, competing in the women’s 50-kg freestyle wrestling event, and NBA forward Rui Hachimura, a 23-year-old Toyama native, were the last two flagbearers to enter the stadium.

They took turns carrying the flag, the 153-cm Susaki held it first. Then it was the 203-cm Hachimura’s turn.

For the audience watching on national broadcaster NHK, the camera panned to IOC President Thomas Bach, Emperor Naruhito and Prime Minister Yoshihide Suga, all of whom were seen clapping at that seminal moment.

At 10:37 p.m., fireworks from the New National Stadium again ascended toward the heavens.

Moments later, a global compilation video interspersed with scenes of singers, including the Tokyo-based Suginami Junior Chorus from inside the stadium, contributed parts to John Lennon’s Imagine.

Tokyo 2020 Organizing Committee President Seiko Hashimoto, a seven-time Olympian, said: “The Tokyo 2020 Games are the first Olympics in history to be postponed, and among this big challenge, we have opened the Games. As the world is still going through the harsh situation of COVID-19, I would like to express my respect and gratitude to all those who are working hard every day to overcome this difficulty.”

She continued: “To all the athletes that you have gathered here, thank you! Despite the difficulties, you haven’t stopped one moment, you have worked hard every single day, and you have arrived to this point. As an athlete, I am proud of all the athletes. Believing in yourselves, and the miracles that you have made a reality, that is an irreplaceable treasure. This is your time to shine, which can bring back hope to people.”

She also referred to the 10 years since the disaster: “Looking back, in the path towards the Olympics Japan saw the [Fukushima] disaster 10 years ago. At the time, the world held out a hand, and told us, let’s go forward.”

Bach followed Hashimoto to the lOC lectern. He began by greeting Emperor Naruhito, PM Suga and Hashimoto by name before beginning a short speech around 11 p.m.

“This is a message of hope,” the IOC boss said. “Yes, it’s very different from what all of us imagined. But let us cherish this moment. Finally, we got here together.”

Speaking to the gathered Olympic athletes, Bach continued: “Millions of people around the world are cheering you on.”

He said they have a duty to stand together in solidarity as athletes and as citizens from all corners of the world.

“This solidarity is [part of] our mission to make the world a better place through sport,” Bach said, adding, “without solidarity there is no peace.”

Moments earlier, paper doves added a peaceful visual effect to the night, and there were scenes of smiling Olympians slowly sliding their smartphones in panoramic movements to capture the doves above their heads.

Athletes stood apart to adhere to social-distancing practices on the stage placed on the surface over the stadium. It was a reminder throughout the evening of the reality of this year’s Olympics compared to past Opening Ceremonies, where space between Olympic teammates didn’t exist.

Indeed, the inside of the stadium didn’t have the typical look filled with spectators in every sight. Pandemic protocols barred most of the stadium from being occupied, following the organizers’ recent decisions.

Bach, a 1976 Olympic fencing gold medalist (team foil) while representing West Germany, stood alongside Emperor Naruhito as they were introduced over the loudspeakers as the ceremony began.

The Run-Up to the Night’s Biggest Moments

French President Emmanuel Macron and U.S. First Lady Jill Biden were among the other dignitaries who attended the evening’s festivities.

Two-time Olympic weightlifting champion champion Miyake Yoshinobu, who hails from Miyagi Prefecture and captured his first gold at the 1964 Tokyo Games, and 2000 Sydney Games women’s marathon champ Naoko Takahashi were among the six individuals carrying the flag into the main area of stadium. A paramedic, Mizuki Asaba, selected to honor healthcare workers, was also among the group.

There were other symbols of the delayed 2020 Games’ connection to the 1964 Olympics. For example, the wooden Olympic rings used in the ceremony 20,741 days after the earlier Tokyo Games on October 10, 1964, came from trees planted by Olympians 57 years ago.

Members of the Japan Self-Defense Forces held the flag during the playing of Kimigayo, the national anthem. Chart-topping pop superstar Misia, wearing a voluminous, flower-shaped, delicately multicolored dress, delivered a soulful, uplifting rendition of the song.

Throughout the long ceremony, nearly all athletes wore face masks during their processions into the stadium.

In an admirable policy change, one that promotes gender equality, nations designated two athletes as flagbearers and they both put a hand on the flag as they participated in the Parade of Nations.

Though the Tokyo Olympics’ motto, “United by Emotion,” has been a repeated message by Olympic organizers for months, the technologically brilliant animated sports images painted a lively segment just after the outset of the program.

Circles and waves and streaks of light were whimsical aspects of the creative backdrop of the ambitious program.

Breathtakingly beautiful fireworks splashed above the stadium at 8:05 p.m. It set in motion a well-scripted and choreographed sequence of artistic dances and other visual arts, at times combined with traditional Japanese festival acrobatics and martial arts-like mannerisms and movements.

In an era when stay-home declarations and social isolation have affected people’s lives, the ceremony also included a respectful nod to this reality, as noted on the official Olympics.com event blog. Arisa Tsubata, a boxer and nurse, was seen in the spotlight jogging on a treadmill.

Despite the enticing backdrop of the New National Stadium during the performances, the event was clouded by a pair of public-relations disasters in recent days.

Comedian Kentaro Kobayashi, the creative director of the Opening Ceremony, was dismissed by Tokyo 2020 President Seiko Hashimoto only one day before the extravaganza. The reason? A 1998 video recently resurfaced from a sketch he appeared in joking about the Holocaust.

What’s more, Opening Ceremony composer Keigo Oyamada, known ubiquitously as Cornelius, announced his resignation on Twitter days earlier in the aftermath of public backlash to two magazine interviews he had done in the 1990s, “ in which he appeared to be boasting about bullying a disabled classmate when he was in school,” JAPAN Forward reported.