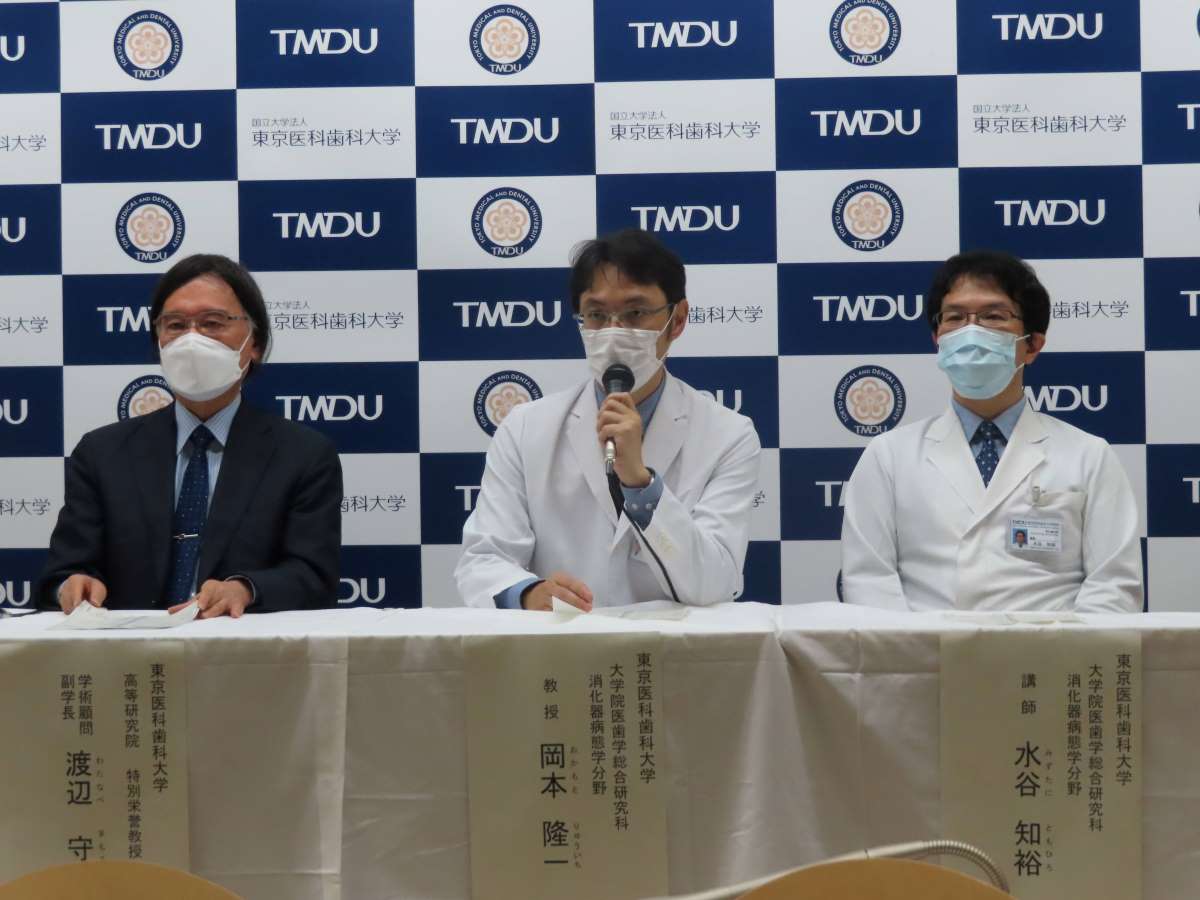 Dr Ryuichi Okamoto, Professor of Tokyo Medical & Dental University (center) and others explaining the transplantation of "mini-organs" in the intestine on July 7, 2022 in Bunkyo-ku, Tokyo (photo by Juichiro Ito)

A Tokyo Medical and Dental University (TMDU) team announced on July 7 that it has conducted the world’s first clinical transplant of a “mini organ” into a patient with ulcerative colitis, an intractable disease. Part of a clinical study, the mini organ is made from cells obtained from the patient, and functions like a large intestine.

Researchers hope that the therapeutic method can possibly repair the ulcerated area of the intestine, which is difficult to treat with drugs. Its practical use as a new therapy in regenerative medicine is anticipated.

The surgery was conducted on an ulcerative colitis patient with refractory ulcers at the Tokyo Medical Dental University Hospital on July 5. Stem cells, which are tissue-building cells, were collected from the vicinity of a healthy colonic mucosa and cultured. Many spherical mini organs measuring at 0.1 ~ 1.2 millimeters were produced. These were then transplanted into the ulcerated area with an endoscope.

The surgery was successful and the patient was discharged from the hospital the following day. The team will monitor the patient’s condition over the next year to confirm safety and efficacy of the treatment.

At the press conference, Professor Ryuichi Okamoto stated, “We were able to reach the starting line of a new medical therapy. We hope to continue a steady progression in our research and deliver the results to patients.”

Mini organs are a collection of cells that bear the function and three-dimensional structure of actual organs. Also called “organoids,” their utilization in applied research in regenerative medicine is gaining momentum with various organs.

The surgery on July 5 is said to be the first ever full-scale organoid transplant to be conducted.

Ulcerative colitis is an intractable disease brought on for unknown reasons. It causes inflammation and ulcers along the mucosa of the colon, triggering symptoms such as abdominal pain and bloody diarrhea.

The number of patients is rapidly increasing, with an estimated 220,000 people affected in Japan. Symptoms can improve with anti-inflammatory drugs. However, if the disease becomes severe it could be difficult to repair or regenerate the ulcerated area using only symptomatic treatments available up to now.

Organoids bear a resemblance to the conditions of actual human tissues. Therefore, they are able to regenerate the ulcerated area because of their ability to attach to the affected area. Combined with the use of medication, a complete recovery is said to be possible.