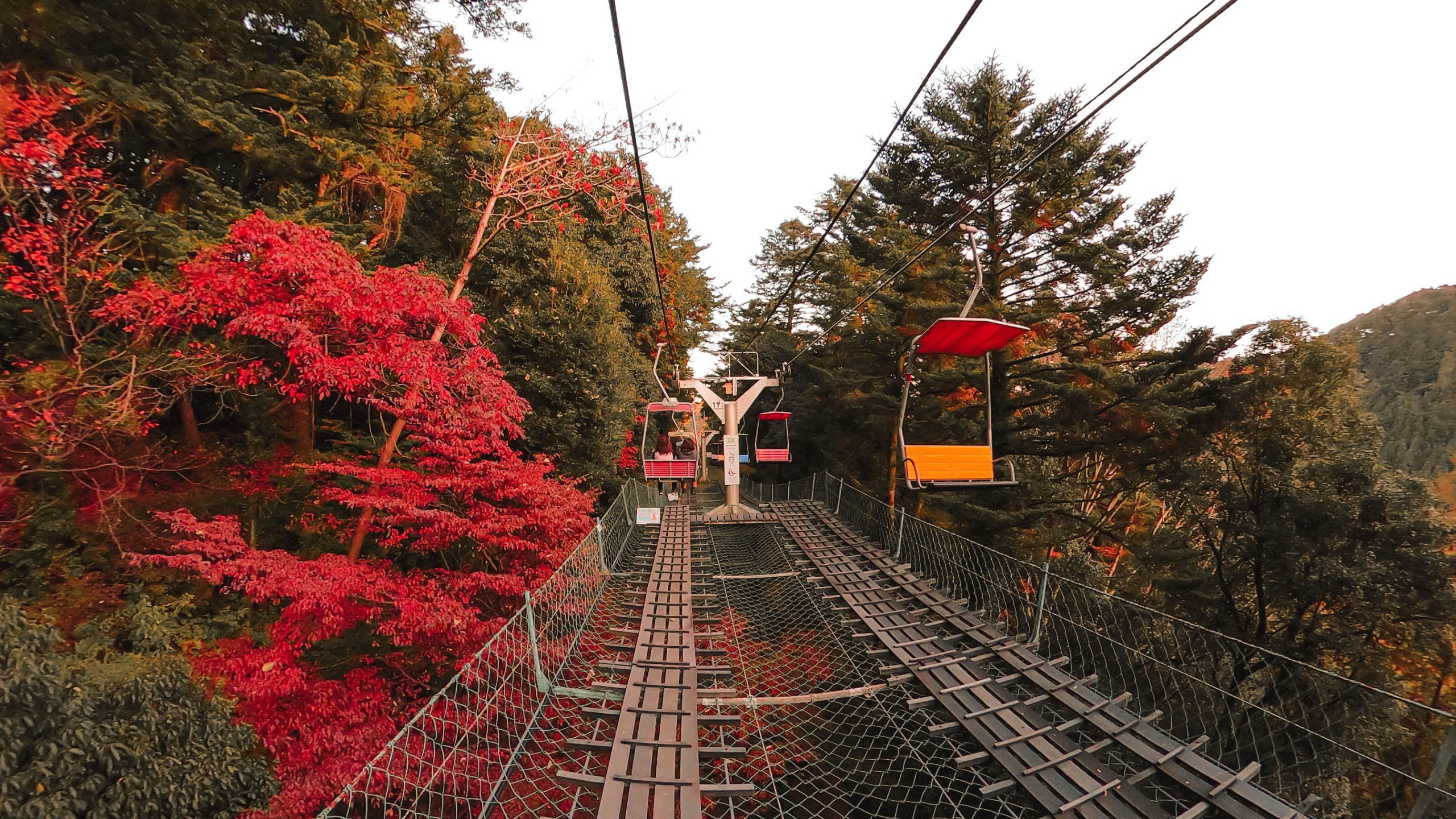 View from the chair lift at Mt. Takao

Japan is a great place to enjoy autumn colors as the foliage takes center stage throughout the country.

Autumn leaves vary in hue based on the species of tree and progression of dropping temperatures. Variations in reds, yellows, oranges, and greens contrast with cherry blossoms of Japan's springtime, which paint the landscape with similar shades of pink.

In November, momiji gari (autumn foliage viewing) is a popular leisure activity in Japan. The repetitive overlapping colors of the leaves are like an oil painting that can only be appreciated during this time of year.

Here are five of the best viewing spots in Tokyo to enjoy momiji gari.

Located between Kichijoji and Mitaka in the Tokyo suburbs, Inokashira Park is famous for its autumn colors.

There is a long pathway surrounded by trees that surrounds Inokashira Pond within the park. It's a beautiful spot where you can enjoy momiji from boats and watch sunsets through gold and crimson leaves.

The park covers an area of about 400,000 square meters. It's also home to the Ghibli Museum, Inokashira park zoo, and an athletic field.

Admission: Free for the park. Check here for the zoo.

As the only botanical park in Tokyo, Jindai Botanical Gardens comprises a vast area of more than 480,000 square meters.

Originally a nursery, it was opened as Jindai Ryokuchi after World War II and was renamed Jindai Botanical Gardens in 1961.

With approximately 4,800 plant species and 100,000 plants, the garden is divided into 30 sections by plant type, including a rose garden, azalea garden, plum garden, and a holly garden.

Having been renovated and reopened in 2008, the large greenhouse is home to a collection of exotic plants and a variety of flowers.

Waterside plants such as reeds, ogi (Japanese knotweed), water bamboo, and iris can be found in the Aquatic Botanical Garden, which opened in 1985.

Jindaiji Castle, a nationally designated historic site, is also located within the garden.

The park is located in Tachikawa in the western part of Tokyo.

There are so many acres here that you will need a bicycle to explore them all.

Over 160 hectares of natural space, seasonal flowers, water features, museums, and sports facilities can be found in this vast park.

It was established in 1983 to commemorate the 50th anniversary of Emperor Showa's reign.

Multiple wide lawns provide visitors with ample space for picnicking and relaxing in the park.

Also included are woodlands with walking trails, ponds, flower beds, and a large Japanese garden, as well as several fields and hills.

While you're there, the Emperor Showa Memorial Museum located at the southwest corner of the park is also worth a visit.

Photos and personal belongings of the late Emperor Showa are displayed in the museum, such as his botanical collection and his car.

Among the other attractions at the park are a bonsai museum and a large children's play area with slides and bouncing domes.

A boating lake is also available where visitors can rent boats to row or pedal by the hour.

In Tokyo, Mount Takao is a favorite accessible destination for those seeking autumn scenery.

The mountain is a popular tourist destination anytime among nature lovers. And hiking in the mountains during autumn is considered one of Japan's best ways to enjoy autumn colors.

Cable cars and ropeways take you halfway up the mountain if you're not in the mood to hike the entire trail.

A breathtaking backdrop of color surrounds the cityscape as you climb to the summit of the 599-meter mountain.

It is also worthwhile to stop and visit the shrines and the monkey park.

Mount Takao's autumn leaves are at their best during the Mount Takao Autumn Leaves Festival held in November.

A variety of exhibitions are held at Kiyotake cable car station at the base of the mountain on weekends and holidays throughout the month, including taiko drumming performances, Japanese orchestra performances, Yosakoi dancing, and concerts.

Located near Shinjuku Station, Shinjuku Gyoen is one of Tokyo's most popular parks. And it's one of the most spectacular spots in downtown Tokyo to enjoy autumn foliage.

Later, it was transformed into a botanical garden, after which it was given to the Imperial Family, who used it for recreation and entertainment of guests.

Completely destroyed by an air strike in 1945 during World War II, Shinjuku Gyoen was designated a National Park in 1947 and reopened to the public two years later.

Despite being located in the most popular area of the city, this expansive park offers a peaceful and relaxing atmosphere surrounded by lush nature that displays beautiful scenery during any season of the year.

In the spring, Shinjuku Gyoen Public Park is known as one of the most crowded hanami (sakura viewing) spots in Tokyo.

However, it does not get very crowded during Koyo (autumn colors) season.

As the leaves change colors, Momijiyama, or "Maple Tree Mountain" becomes an especially picturesque spot within the park.

Once you pass through the gates, you will be surprised. Shinjuku Gyoen includes three different types of gardens featuring various kinds of plants and trees. There is a traditional Japanese garden, a French garden, and an English garden including large beds of roses, all found in this park.