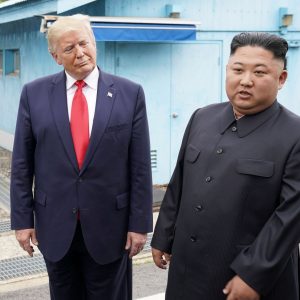 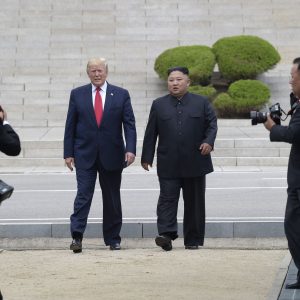 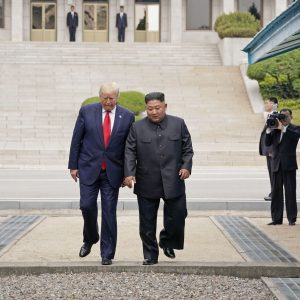 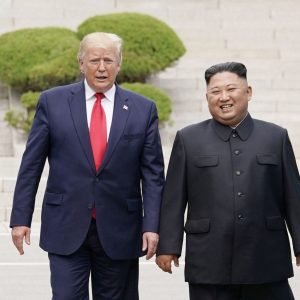 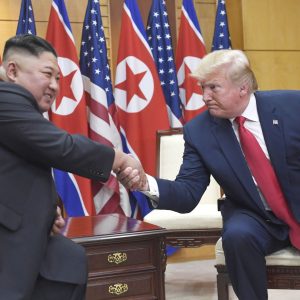 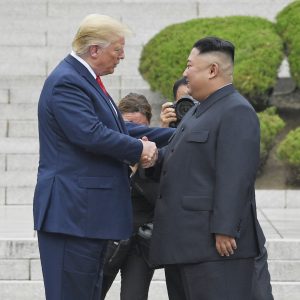 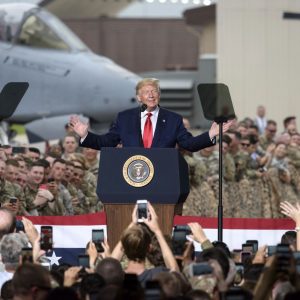 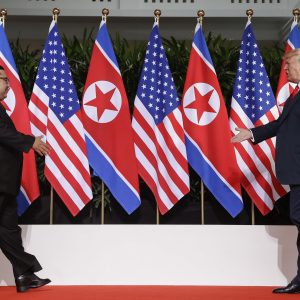 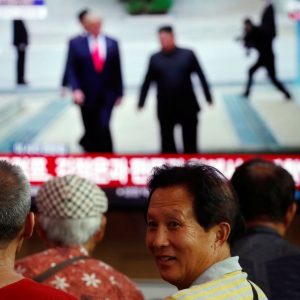 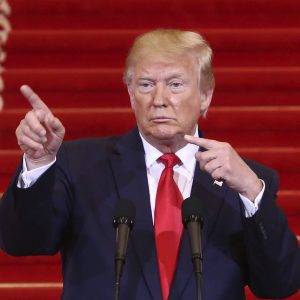 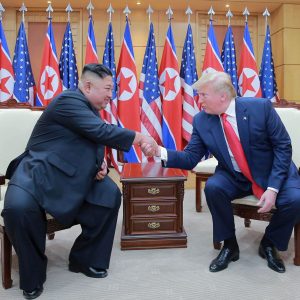 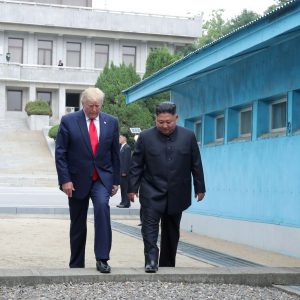 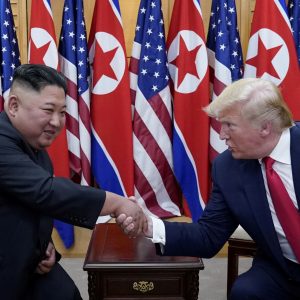 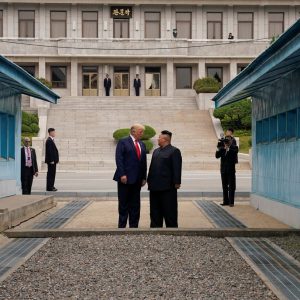 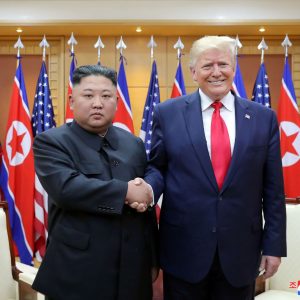 Donald Trump met Kim Jong Un at Panmunjom on the military demarcation line in the Demilitarized Zone (DMZ) between the two Koreas on Sunday, June 30, where the United States president surprised everyone with the announcement that he had invited the North Korean leader to the White House.

After exchanging greetings in the DMZ, Kim escorted President Trump across to the North side of the DMZ’s Joint Security Area on foot, where the two shook hands and chatted briefly before President Trump turned back to the southern side together with the North Korean leader.

It was the first time in history that a sitting U.S. president had crossed the demarcation line and set foot in North Korea.

Attention has been focused on whether the subsequent surprise, impromptu talks between the two could help serve as a new breakthrough for restarting stalled Washington-Pyongyang negotiations on denuclearization of the North.

After exchanging a few friendly words with each other, the two posed for photos several times and answered questions amidst a throng of press photographers and reporters. Trump said to Kim, “It was an honor that you asked me to step over that line, and I was proud to step over that line.”

Trump then declared that he would be inviting Kim to visit him at the White House. The President stopped short of referring to the timing of such a visit by Kim to the United States, however.

Kim said in response, “This has a lot of significance because it means that we want to bring an end to the unpleasant past and try to create a new future [along with the United States].”

He offer praise for Trump’s “courageous and determined act.”

This was the third Trump-Kim encounter. It followed their first meeting in Singapore in June 2018 and a second summit in Hanoi, Vietnam, in February 2019. The latest talks lasted for about 53 minutes.

Earlier on June 30 and before arriving at the DMZ, President Trump met with South Korean President Moon Jae-in at the Blue House presidential office in Seoul. The two headed for Panmunjom together to inspect the demilitarized zone lying between the South and the North.

In the news conference after his meeting with Moon, President Trump commented on prospects for the North’s denuclearization: “Now, let’s see what happens. We have a long way to go. But I’m in no rush. Speed is not the thing.”

Trump, more than halfway through his presidential term, noted in addition that North Korea “has suspended nuclear tests and there’s been no missile tests.” He argued the situation “has moved forward a great deal compared to two-and-a-half years ago.”

Moon, who accompanied Trump to Panmunjom, said, “I can reassure you that the only way that we can achieve peace [on the Korean Peninsula] is through dialogue.”

He praised Trump for his decision to meet with Kim on the border of North and South Korea, saying, “President Trump is the maker of peace on the Korean Peninsula.”

Signs of ‘Counting Out South Korea’

President Trump’s trip to South Korea this time originally had been designed to reconfirm strong bilateral cooperation under the U.S.-South Korean alliance for denuclearization of the Korean Peninsula. Moon and Trump had aimed to make it an opportunity to show off close coordination between Washington and Seoul.

However, global attention on the President’s trip to the Korean Peninsula shifted to Trump's spur-of-the-moment idea of a summit between the U.S. and the chairman of the Workers’ Party of Korea, Kim Jong Un. By calling for the meeting with Kim at the last minute, Trump effectively quashed President Moon’s hope of impressing the South Korean public and the world with a new honeymoon phase in the U.S.-South Korean relationship.

The Trump-Kim talks were realized on June 30, the day after the U.S. President directly tweeted an offer to meet Kim. That fact has made it imaginable that Trump, in doing so, indirectly signaled that he no longer needs the mediation role of Moon, who had billed himself as a “bridge builder” between the United States and North Korea.

Trump let Moon announce the actualization of Trump-Kim meeting at a joint news conference after the U.S.-South Korean summit in Seoul and had Moon accompany him to Panmunjom, the venue of Trump’s meeting with Kim. However, the U.S. President did not invite Moon to be present at his talks with the North Korean leader, which were held at the House of Freedom on the South Korean side of the DMZ.

At the outset of a luncheon in Seoul just before heading for Panmunjom, Trump said relations between Washington and Seoul “are more secure than ever before.”

But there were few additional remarks by Trump on the matter, highlighting a striking difference from the words of Moon, who made a point of stressing “big leaps in South Korean-U.S. relations both in the trade and security fields.”

President Trump has reportedly long since developed a sense of distrust of Moon for his failure to make an active contribution to expediting the North’s denuclearization process while putting weight on an appeasement approach towards Pyongyang. Trump’s meeting this time with Kim may perhaps be considered an outcome of the U.S. president's dissatisfaction with Moon.

Follow this link for additional information in English on the history and analysis of meetings between President Trump and Kim Jong Un.