Trump Visit Day 2: A Gift to the Emperor, A Promise to Families of the Abducted 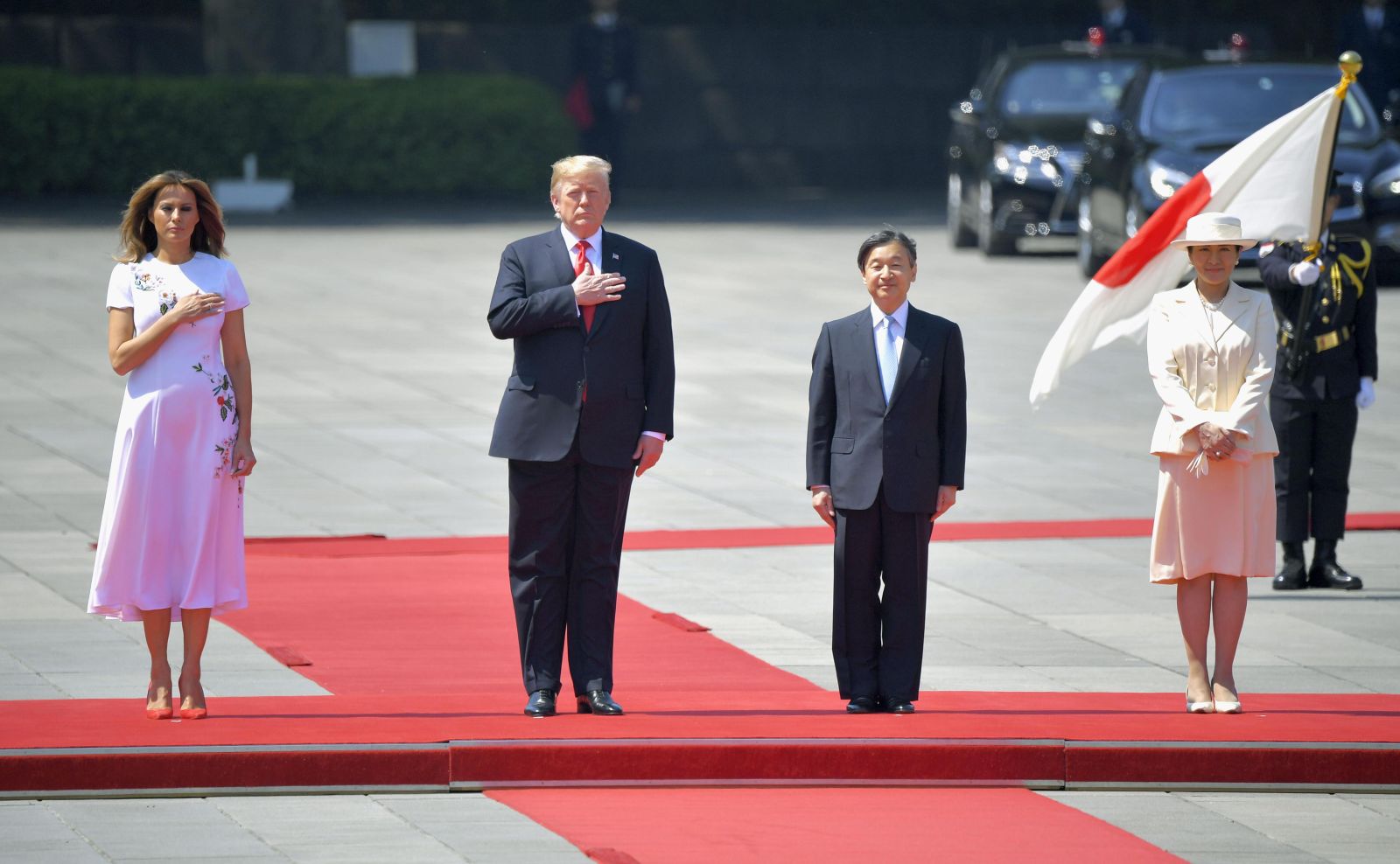 United States President Donald Trump’s state visit to Japan, from May 25 to May 28, has been full of firsts.

JAPAN Forward covers the main events of the presidential visit in pictures, with a brief summary of and main takeaways from the most important events. Review the visit for yourself, in reverse chronological order starting from the most recent developments, below.

Did we miss anything? Let us know in the comments below.

Morning: Emperor’s Welcome and Official Ceremonies of the State Visit 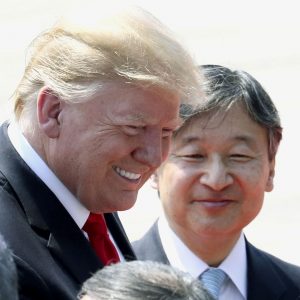 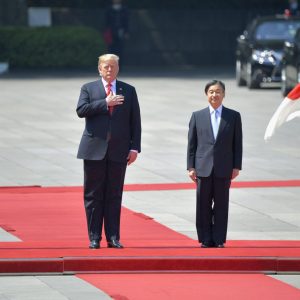 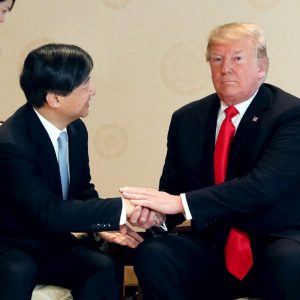 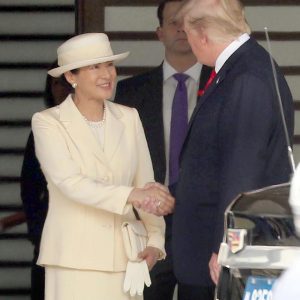 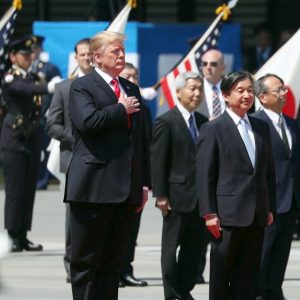 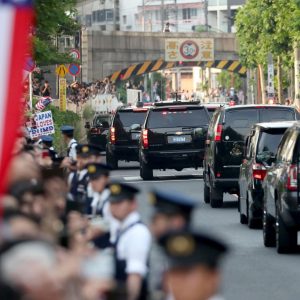 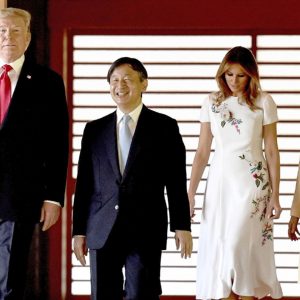 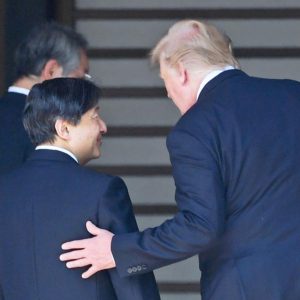 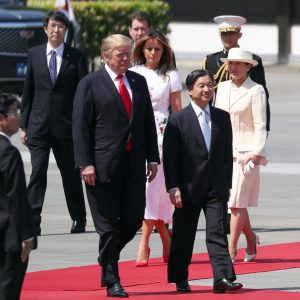 The ceremonies and meeting of the first official state visit of the Reiwa Era were much anticipated at home and abroad. This was the official welcome of a head of state by Emperor Naruhito since he ascended to the Chrysanthemum Throne on May 1.

The imperial couple conversed directly with President Trump and First Lady Melania. Interpreters didn’t have much to do as the Oxford-educated Emperor Naruhito and Harvard-educated Empress Masako spoke comfortably in English with their guests.

President Trump seemed very at ease during the visit. Among other comments, he remarked on how far the ties between the two countries had come as they had managed to overcome war to develop the best possible relationship.

The exchange of state gifts is a long tradition among international leaders that both couples followed. They exchanged the usual signed, framed photos of themselves. Among the notable additional gifts, however, was a vintage handmade viola made in the United States which was given in recognition of the Emperor as an avid viola player. Emperor Naruhito, in exchange, gave the President a traditional piece of handmade Japanese pottery.

Melania Trump gave Empress Masako the present of a desk set, including a pen made from an oak-tree from Harvard University, the alma mater of the Empress. Empress Masako gifted an ornamental lacquerware box to the First Lady. 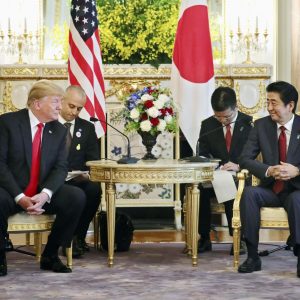 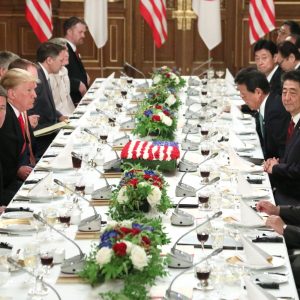 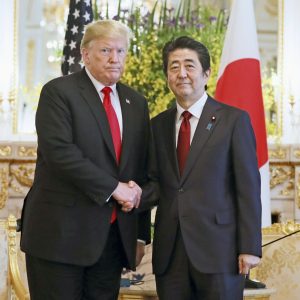 The longest part of the day was taken up by a summit meeting occupying the two leaders for nearly three hours from the late morning to early afternoon.

The summit was divided into three parts. First, a meeting between the President and Prime Minister alone, accompanied only by their interpreters. This was followed by a larger meeting for which additional officials joined the two leaders to focus on specific issues. Finally, the two sides held a working lunch before concluding their bilateral talks.

Prime Minister Abe and President Trump briefly talked to the press in the morning after the first bilateral meeting.

“I feel we understand each other very well,” commented President Trump. He also hinted that there would be further news regarding the trade talks in summer, saying, “Trade-wise I think we will be announcing something, probably in August, which will be good for both countries.”

A notable piece of news was the fact that both parties agreed that Prime Minister Abe’s good relations with Iran could bring positive developments in the issue of tensions between the U.S. and Iran. “I know for a fact that the Prime Minister is very close with the leadership of Iran, and we’ll see what happens,” Trump said. “Nobody wants to see terrible things happen, especially me.”

Afternoon Meeting with the Families of Abductees 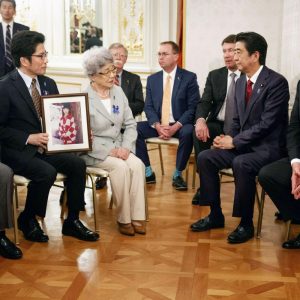 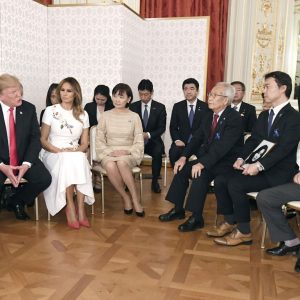 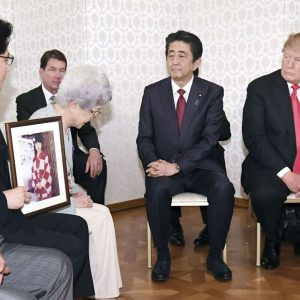 Reflecting the high level of importance the Prime Minister has ascribed to the issue of North Korea’s abductions, President Donald Trump and his wife Melania, together with Prime Minister Abe and First Lady Akie, met the families of the abduction victims at about 2 P.M. in Tokyo’s Minato ward.

This was the second time the American President and First Lady met with the families — the first was during his visit in November 2017. After listening to their painful testimony, President Trump commented on the issue, pledging: “It is very much in my mind…. We will be working together to bring your relatives home.”

Trump emphasized his understanding of how important the issue is for the Japanese Prime Minister: “I can also tell you for certain that it is the Prime Minister’s primary goal.”

On the families side, there was great appreciation for the efforts made on the part of the two world leaders, Trump and Abe, to bring the issue directly to the attention of North Korean Chairman Kim Jong Un.

Sakie Yokota, the mother of Megumi Yokota, who was abducted in 1977 when she was only 13, addressed President Trump, saying: “I reiterate my appreciation and deep gratitude that you are spending time for the second time with the family members. It shows how serious you are about the abduction issue.”

She continued expressing her hopes for the future based on the close cooperation of Prime Minister Abe and the U.S. President. “Since then, we have started to see some tangible change for the resolution of the issue.” 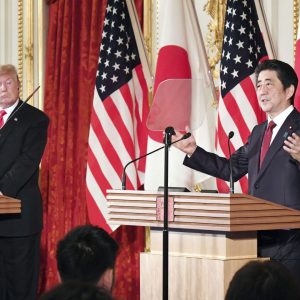 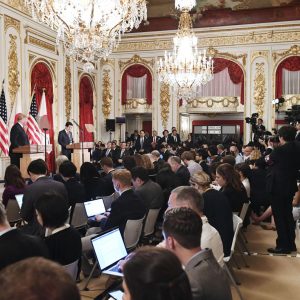 At just a couple of minutes after 3 P.M., Prime Minister Shinzo Abe and President Trump appeared before a full house of journalists from all around the world, ready to talk about wrapping up a morning and afternoon of formal functions and substantive negotiations.

The connecting thread throughout the press conference was the unequivocal commitment to further strengthening the alliance between Japan and the United States. Prime Minister Abe said, “This visit is a golden opportunity to make clear at home and abroad the unshakable bond between the U.S. and Japan.”

After expressing pleasure at welcoming the U.S. President as the first official state visitor of the Reiwa Era, the Prime Minister moved forward, emphasizing the North Korean issue and the question of how to deal with Chairman Kim Jong Un in the future. “We are completely on the same page,” Abe said, referring to Trump’s position on issue.

Abe also took the time to thank Trump and First Lady Melania for offering comfort and listening to members of the families of North Korean abduction victims. He particularly thanked the President for his support in “acting resolutely to solve the abduction issue.”

Regarding issues such as security and trade, the Prime Minister reiterated the closeness of the two countries’ relationship, but also stressed the importance of personal ties. “Because of our personal relationship, our bond [between our two countries] has become unshakable, the closest in the whole world,” he said. 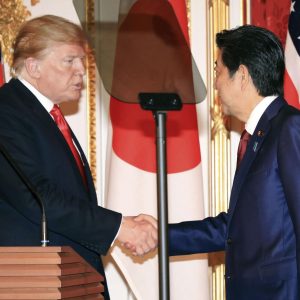 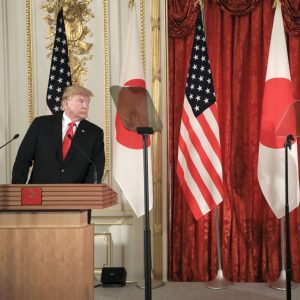 President Trump also had warm words for the arrangements and events of his state visit, thanking Japan profusely for sharing the country’s “incredible heritage” with them.

Specifically regarding the official state welcome by Emperor Naruhito in the morning, he commented: “Melania and I are truly thrilled to be back in the Land of the Rising Sun. It is a true privilege to take part in the splendor of this historic moment and to witness an ancient Japanese tradition as you begin the new imperial era. We look forward to seeing the new Emperor continuing his father’s extraordinary legacy.”

He also called the alliance between Japan and the U.S. a “cornerstone of stability and prosperity in the region and the world.” To bring home further the point, he said it was a relationship which is “steadfast and ironclad.”

President Trump concluded his opening remarks at the press conference with a comment on the imperial era name and the hope it suggests for the future: “You have chosen as the imperial name ‘Reiwa,’ meaning ‘beautiful harmony.’ America shares this aspiration for the future, and I look forward to continuing our tremendous partnership as we work together to bring this noble vision to life.”

Evening: Banquet at the Imperial Palace 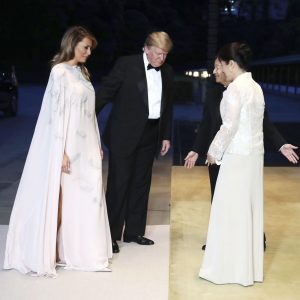 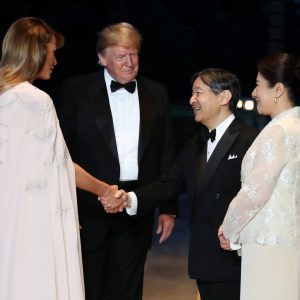 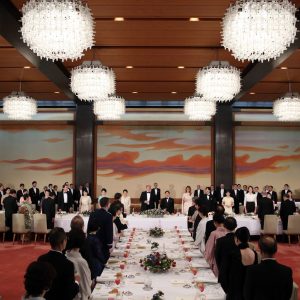 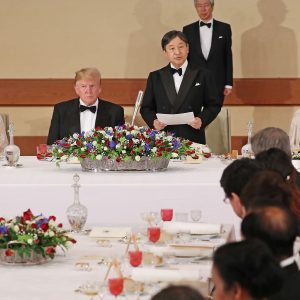 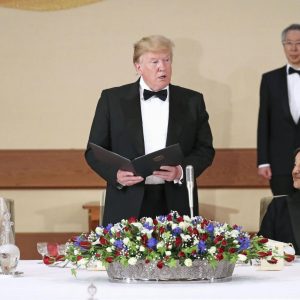 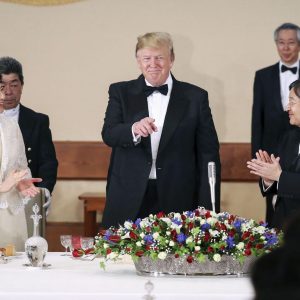 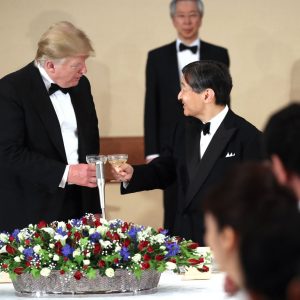 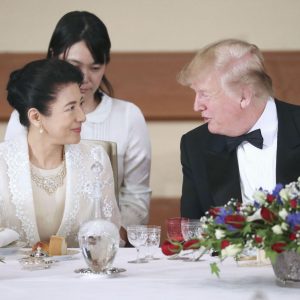 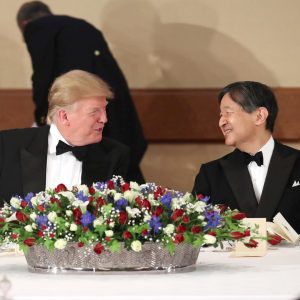 Just after 7 P.M., Emperor Naruhito, wearing a smart tuxedo, and Empress Masako, wearing a stunning white long dress, welcomed President Donald Trump and First Lady Melania to the Imperial Palace for a formal state banquet in honor of the presidential visit. The elegant affair was attended by dozens of representatives from government and other sectors from both countries who have contributed to Japan’s warm relations with the United States.

Guests were served a six-course dinner of French cuisine with beef steak as a main course, according to the live broadcast on NHK, Japan’s national broadcasting system. The dinner finished with a fruit dish and dessert shaped like Mt. Fuji to conclude a day of diplomacy and negotiations.

In his speech, the Emperor of Japan again welcomed his guest to the Imperial Palace, saying, “I am very happy to be welcoming President Trump as the first official visitor.” Naruhito also stressed how far their countries had come, saying, “Our countries have overcome many events…and now live in prosperity.”

The Emperor also recalled warm bonds with previous U.S. presidents — for example, when he visited America as a student in Oxford, then-president Ronald Reagan welcomed the future emperor to the United States: “I recall those memories fondly.”

Naruhito went on to describe his visit to the Grand Canyon, among other places, adding, “Together with nostalgia, I feel a special kind of closeness in relations.”

President Trump extended his best wishes to the new Emperor and, by extension, to the people of Japan. President Trump referred to the new era’s name, “Reiwa” — “beautiful harmony” —and even specifically quoted the section where the name originates in the Manyoshu, the poetry collection of classical Japanese poetry dating back to 759.  The US President expressed his wish for the bond between the two countries to last for generations to come.

Click here for photos and a report on the state visit and bilateral events for Sunday, May 26.