They Bombed Japanese Cities, Yet B-29 Crew Members Are Remembered in Memorials Across Japan 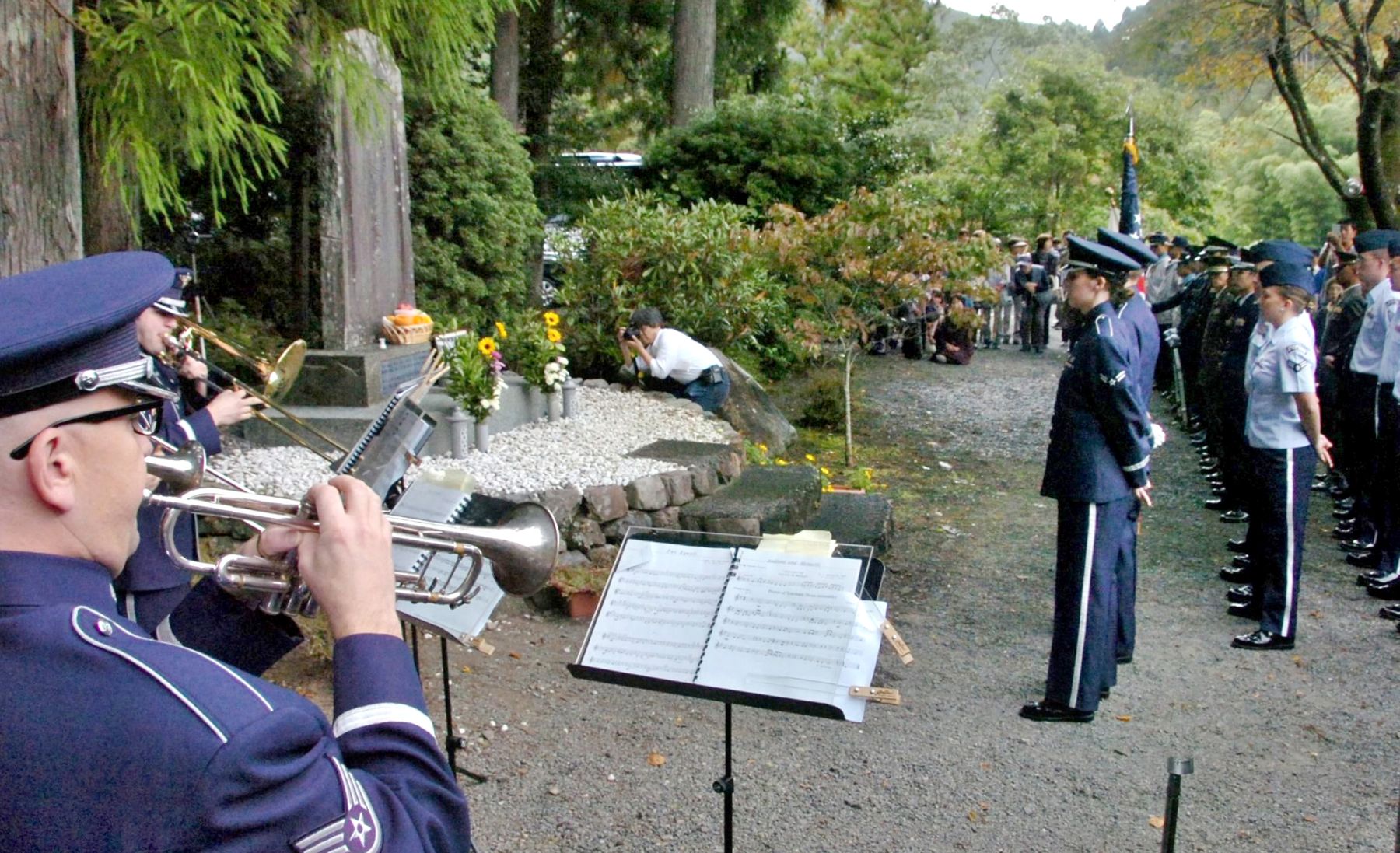 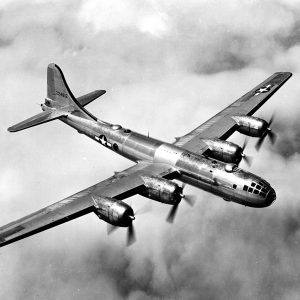 B-29 Bomber in flight (Photo: Boeing B-29 Superfortress) 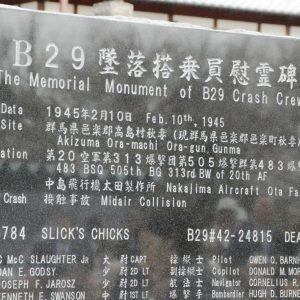 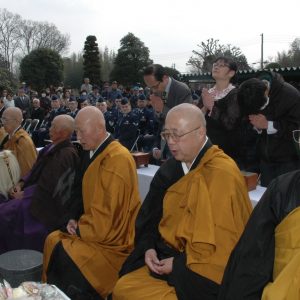 Japanese pray for B-29 crew members at memorials across Japan 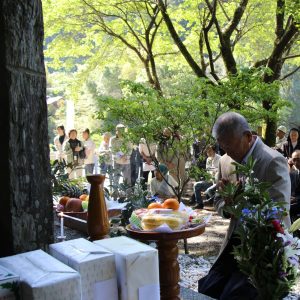 Downed B-29 crew members are remembered in memorials across Japan

B-29 Bomber – type used in bombing Japan in WWII

The strategic bombing of the Japanese home islands during WWII targeted military bases, ports, supply depots, factories, and Japan’s economic infrastructure. But that was not all. To demoralize the populace, American troops also targeted civilians. Civilians were killed, not as collateral casualties, but intentionally and directly. This, of course, may come as a shock to some Americans.

Over 60 cities in Japan were subjected to bombings, many repeatedly. In addition to standard bombs, incendiary bombs were used with devastating effect against individual residences. On March 10, 1945, 16 square miles (41 square kilometers) of Tokyo were obliterated in the fires started by incendiary bombs.

One B-29 crew member was reported to have commented that he could smell burning bodies over the metropolis. Estimates of the dead from that one air raid on March 10 were a staggering 90,000 to 100,000 people — more than the casualties from the atomic bombing of Hiroshima.

March 10, 1945, was not the first B-29 air raid of Japan. B-29 bombings of Japan commenced some nine months earlier, in June 1944, and continued until the end of the war in August 1945 — over a year of relentless bombings. Official Japanese government estimates put the total Japanese civilian deaths from B-29 bombing at 400,000. Other estimates go as high as 900,000. Combined with the wounded, the casualties exceeded one million.

There wasn’t a single Japanese who didn’t recognize the sight of the contrails of the B-29. While carrier-based planes and land-based fighters were involved during the final stages of the war, they mostly attacked military targets. Civilian deaths by strafing attacks were not a significant percentage of the overall casualties. The major aircraft used in the aerial bombing was the B-29. Everyone knew what they were for.

Considering the extent of the devastation and the horrendous civilian casualties that the B-29s had caused, it would be natural to assume that the crew members of the bombers would be the most hated of all people by the Japanese, hated for 10 generations or longer for what they had done.

Surprisingly, unlike other nationalities, the Japanese do not harbor hate and resentment. The crews of downed B-29s were actually memorialized by the very people whom the B-29 missions were designed to kill.

On the southern Japanese island of Kyushu, at the base of a mountain a few miles inland from the coastal city of Nakatsu, Oita Prefecture, there is a beautiful park, the Mount Hachimen Peace Park. I do not know when the park first opened, but having visited the site many years ago, I could attest that it had been there for some time. It is also referred to as the Sanko Peace Park since it is located near the village of Sankotaguchi.

On May 7, 1945, a B-29 of the 331st Bomber Wing crashed at that site after being rammed head-on by a Japanese fighter plane. Mount Hachimen Peace Park was built to memorialize those who died there, including the three American crew members who successfully parachuted to safety but were executed as war criminals.

They also put a large diagram of the United States at the memorial site at the entrance to the park, showing the home states of each crew member. Because B-29s targeted civilians, B–29 crewmen were considered war criminals by the Japanese government. And yet, those same crew members were memorialized and remembered, not as enemies, but as brave young men who gave their lives for their country in a faraway place.

Any other nation would have dedicated the park only to the pilot who sacrificed his life to bring down the bomber. In Japan, fallen enemies and fallen friends are memorialized together.

Even more telling are the memorials in the cities of Shizuoka and Wakayama erected during the war. A description of the Shizuoka memorial was provided in the July 10, 2017, issue of the U.S. Air Force’s Yokota Air Base News:

On June 19, 1945, two B-29s of the 314th Bomber Wing collided after bombing the city. Twenty-three crewmen died. A Japanese citizen, Mr. Ito, pulled two airmen from the crash but they died shortly thereafter. He gave the crewmen a proper burial, erected a memorial and began conducting an annual memorial ceremony at the gravesite for the crewmen and also for the two thousand citizens of the city who had perished in the bombing raid. After his passing, the tradition was continued by the city. Since 1972, volunteer U.S. airmen stationed at Yokota Air Base in Tokyo have participated in the annual U.S.-Japan joint memorial service at the gravesite to pay respect to all those who died that day. The gravesite has a large stone memorial. A blackened canteen which had been recovered from the wreckage of the B-29 is filled with bourbon whisky and poured onto the crash site as a goodbye to the spirit of the fallen, both American and Japanese, and as a symbol of hope, inspiration and peace.

B-29 Memorials Throughout Japan 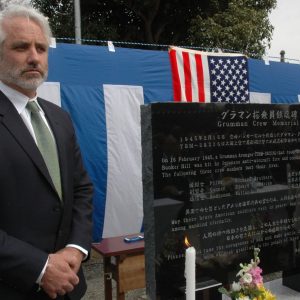 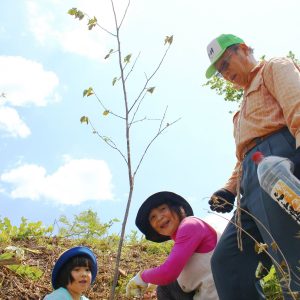 Downed B-29 crew members are remembered in memorials across Japan

On February 10, 1945 in Gunma Prefecture, the B-29 Slick Chick was rammed by a Japanese fighter. Parts of Slick Chick hit the B-29 Deaner Boy, resulting in both aircraft crashing. All 23 crew members were killed.

After the crash, villagers buried the fallen airmen. Today, there is a memorial at the site, with the names of all crewmen inscribed along with the following words: “We wish to commemorate these 23 brave souls, and offer a wish for world peace and friendship between Japan and America.”

In March of 2015, memorial services with American service personnel from Yokota Airbase and local citizens attending were held at the nearby Seigenji Shrine, officiated by the temple priest and priests from seven other area temples.

On January 3, 1945, the B-29 Leading Lady, on its return leg after bombing the city of Nagoya, was rammed by a Japanese fighter and brought down in the vicinity of Toyota City in Aichi Prefecture. All crew members perished, except one who had parachuted to safety. The lone survivor returned to the States after the war. On November 14, 2010, a joint memorial ceremony was held at the crash site by Americans and Japanese to honor the dead. Memorial services since are held yearly on January 3.

On November 21, 1944, the B-29 Acid Test was rammed by a Japanese fighter plane near Omura, Nagasaki. All crew members perished. The bodies of the downed B-29 crew members were cremated and their ashes were kept at a temple in Nagasaki, which was destroyed in the atomic bombing of Nagasaki in August of 1945. A memorial was erected at Isahaya near the crash site in 1993. Memorial services are held each year at the site on November 21.

In 2007, a memorial monument was erected at the Shorenji temple in Nabari City, Mie Prefecture, for B-29 #44-69665, which crashed at Nabari on June 5, 1945. Two crew members died in the crash, and the survivors were executed as war criminals. All members of the crew are memorialized at Shorenji, their names listed on the stone memorial there.

On March 10, 1945, three B-29s taking part in the Great Tokyo Air Raid went off course and crashed into Mount Fubo, located in the Zao mountain range north of Tokyo in Miyagi Prefecture. All 34 crewmen lost their lives. Villagers buried the bodies and a memorial was established at the site. After the war, the bodies were returned to the States.

The mayor of Shiroishi later solicited donations from all over Japan to place a monument, at a cost of ¥1 million JPY, on top of Mount Fubo to honor the airmen. The bronze 4’ x 5’ plaque embedded in a large boulder reads, “To the memory of the 34 crewmen of U.S. Air Force B-29s who sacrificed their lives on this mountain on March 10, 1945, and to the everlasting peace of mankind.”

Villagers later placed a replica memorial at the base of Mount Fubo. In 2015, a dedication ceremony was held for the Fubo Peace Park which was opened there. This is a beautiful park with three large memorials, one with names, rank, age, and the crew position of each crew member listed. There are also desk-size separate individual cenotaphs for each crew member, spaced throughout the park.

One can imagine the size of the park by the fact that it has 3,000 trees, half of them Japanese mountain cherry trees and the other half American dogwood trees. Fubo means “unforgettable,” a most apropos word as these crew members will never be forgotten. They had been part of the Tokyo air raid, during which some 100,000 Japanese civilians were killed. Yet, there is no rancor nor hate toward them, only respect for young men who died for their country and prayers for the repose of their souls.

There are probably other memorials to B-29 crewmen which are not listed here. These B-29 memorials reveal an admirable aspect of the Japanese character that is unique, unlike any other. No other people could be so forgiving or devoid of hate and resentment after suffering such great and unimaginable destruction and loss of life. 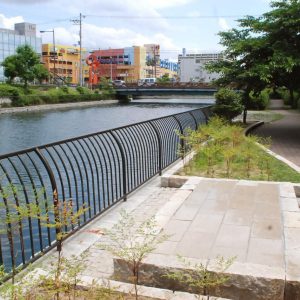 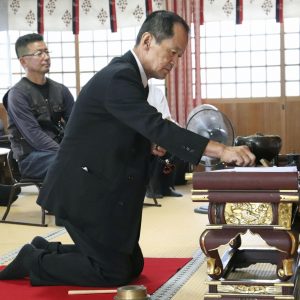 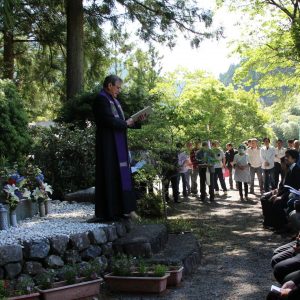 The memorials are in stark contrast to some American cities, where even now comfort women statues with outlandish, unproven WWII allegations to vilify Japan are being erected to promote hate against the Japanese people. We must not teach our children to hate Japan — history, yes — but not unfounded allegations designed to instill hate against Japan.

It is true that Japan was guilty of war crimes and atrocities during WWII, but Japan did not have a monopoly on atrocities. Today, the strategic realities of the world have changed, and yesterday’s enemies are today’s friends. Our alliance with Japan has continued for over 70 years in a firm bond of mutual trust and friendship and our common belief in democracy.

The close relationship we Americans share with the Japanese should be treasured and nurtured. The brave airmen of the B-29s and all others who lost their lives, along with those who prayed for their enemies even during the horrors of war, deserve to rest in peace.

RELATED PIECES ON JAPANESE HISTORY BY THIS AUTHOR