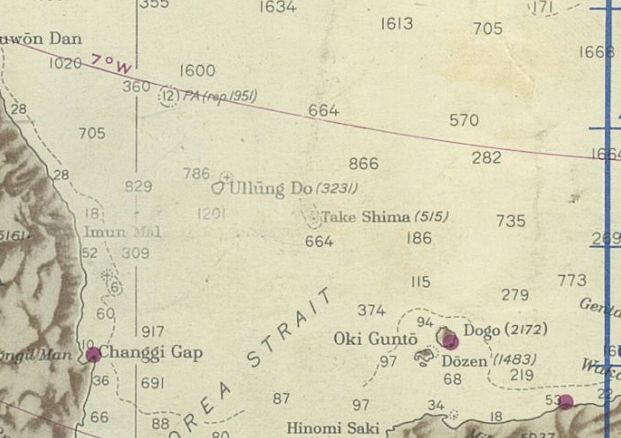 Unconvered map shows Takeshima, Okinoshima-cho, Shimane Prefecture as part of Japan, Ullung Do with Korean name, as part of Korea.

Two sea charts showing that Takeshima (Okinoshima-cho, Shimane Prefecture) belongs to Japan and not South Korea have been unearthed, the Japan Institute of International Affairs (JIIA) revealed on February 19.

The two U.S. Navy charts, which were produced in 1952 and 1953 shortly after the Treaty of San Francisco came into force in 1952, have the Japanese word “Take Shima” written by the islands.

This is the first confirmation of a governmental sea chart issued after the treaty showing Takeshima belonging to Japan. The document supplements the 15 maps such as U.S. aeronautical charts that the JIIA has come across previously. “It is an important document that reinforces Japan’s stance,” says one expert.

Associate Professor Rikinobu Funasugi of Shimane University was asked by the JIIA to look into the matter. Funasugi then carried out research, gathering materials from places such as American secondhand book stores.

The two sea charts, which are titled according to area – North Pacific, northwest region; and Sea of Japan and the Japanese archipelago, including the Southern Islands – were issued by the U.S. Navy in October 1952 and November 1953 respectively.

Both maps have the word “Take Shima” written by the islands.

The 1952 map uses other Japanese names such as “Oki Gunto” in Shimane Prefecture and “Tsushima” in Nagasaki Prefecture.

However, certain locations are referred to by their Korean names such as “Ullung Do” and “Cheju Do.” The 1953 map is the same.

“These two maps reveal the U.S.’s geographical awareness at that time in history. They are important documents that reinforce Japan’s stance that Japan retained Takeshima in the wake of the (San Francisco) peace treaty,” explains Funasugi.

From October 2020 onward, JIIA has announced that it has found 15 maps including U.S. Air Force aeronautical charts that indicate that Takeshima is Japanese territory. These maps were produced between 1953 and 1997 by the U.S. government following the Treaty of San Francisco.

On the aeronautical charts, an international border is drawn between Takeshima and Ullung Do, with the former labeled as “JAPAN” and the latter as “KOREA.” The charts show that the U.S. government considered Takeshima to be Japanese territory.

The U.S. aeronautical charts cover almost all of the world’s regions, and were apparently used widely at both civilian level and military level.

(Find access to the special report in Japanese at this link.)