Uniqlo in the Fashion Capital: Japanese Global With A Touch of Milan 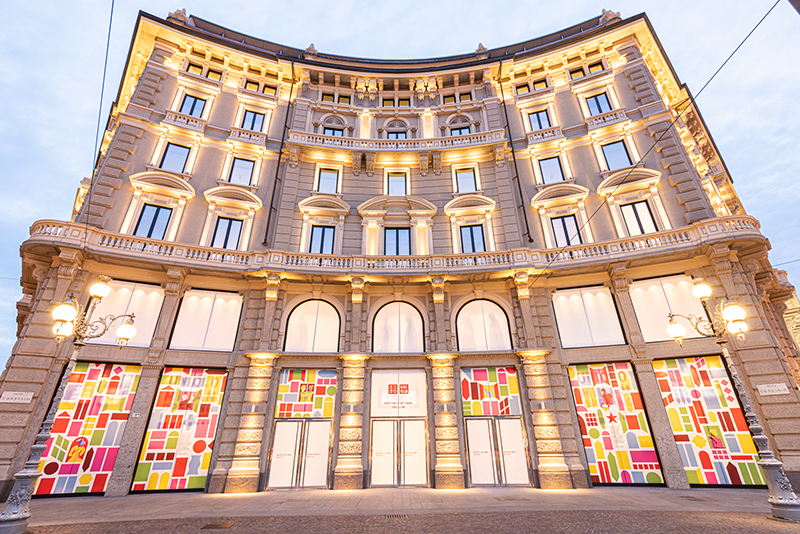 The first Italian flagship store of Uniqlo, Japan’s leading retailer, opened in Milan on September 13 already boasting the largest collection of t-shirts in Europe and a maximum selection of 15 colors for cashmere sweaters.

Located in Piazza Cordusio, near the famous Duomo of Milan, the heart of the global capital of fashion and design welcomed the store from the early hours of the morning with a long queue in front of the door.

Spread over three floors for a total of approximately 3,000 sqm, the branch in Milan is the 90th store in Europe, where the Japanese company first arrived in 2001. Uniqlo has since entered markets in 10 European countries and 21 countries around the world.

With global sales of around ¥2.13 trillion JPY for the 2018 fiscal year ($19.17 billion USD), Uniqlo is the most important brand of the Japanese clothing retail giant Fast Retailing Group.

The opening day was celebrated with a Taiko concert in the presence of the mayor of Milan, Giuseppe Sala.

“First of all, Milan,” Tadashi Yanai, chairman, president, and CEO of Fast Retailing Co. Ltd, said during the press conference held the day before the opening.

He added: “Milan is synonymous with fashion and design, and Uniqlo brings our ‘Lifewear’ concept to Milan. Clothing is a tool made of components that can be associated with all local and global brands.”

The store embodies a meeting between East and West, Italy and Japan, Milano and Tokyo. In the main room a huge screen projects full-length videos of everyday life in Tokyo, as if to say, if you enter here, you arrive in Japan.

This is true not just on the popular culture front, but also in terms of the artistic communication and values. On the first floor of the store, an ukiyo-e t-shirt corner is the setting for an exhibition of the diaries of the great master, Katsushika Hokusai.

At the same time, you can trace the influence of Milan, the capital of design, in collaboration with the Milanese artist Olimpia Zagnoli and attention to detail that created one of the largest ever seen installation in a shop inspired by the city windows.

It seems as though the Milan branch projects the Japanese brand onto a new frontier, pushing Uniqlo to a third-level stage. As president of Fast Retailing’s Global Creative division John C Jay explained, the point is to bring a new idea of a “global brand” which, rather than a “copy-and-paste of the original concept,” instead mixes with and interprets the local reality.

Uniqlo didn’t stop there as it explained its mission to the Italian press. Research and sustainability have always been two of the values promoted by the Uniqlo brand and which are present in the new Milan store.

“Innovation is often not something visible,” continued Jay. “For example, innovating the fitting of a t-shirt is not immediately perceptible, yet it makes a difference. Lifewear seems a simple concept, but it is very complicated. We don’t want to be influencers. Our goal is to make our customers’ lives better at the best possible price.”

Just a few hundred meters from the Uniqlo megastore there is fierce competition from fast fashion brands such as Zara, H&M, and Benetton.

“If I could, I would have opened next door,” said Yanai, “so customers could understand the difference between us and them. Our concept that is the so-called ‘today’s classic’ — a style that blends with the fashion of the world.”

With the fierce competition, Uniqlo has decided to keep with the times by focusing on a fundamental value: the war on waste. “We don’t make clothes to use and throw away, but objects that can last,” Jay said. In a timely announcement on September 17, Uniqlo said it would be partnering with Toray Industries to turn used down jackets and plastic bottles into new clothes to go on sale in 2020.

Finally, pressed by the demands of journalists, the CEO of Uniqlo confirmed rumors from some time ago: that he would prefer a woman to guide the future of the brand.

“I prefer women leaders because they pay more attention to details. They are more intuitive, they tend to think logically and to be more creative, so I think that in this specific field women are better,” Yanai explained.