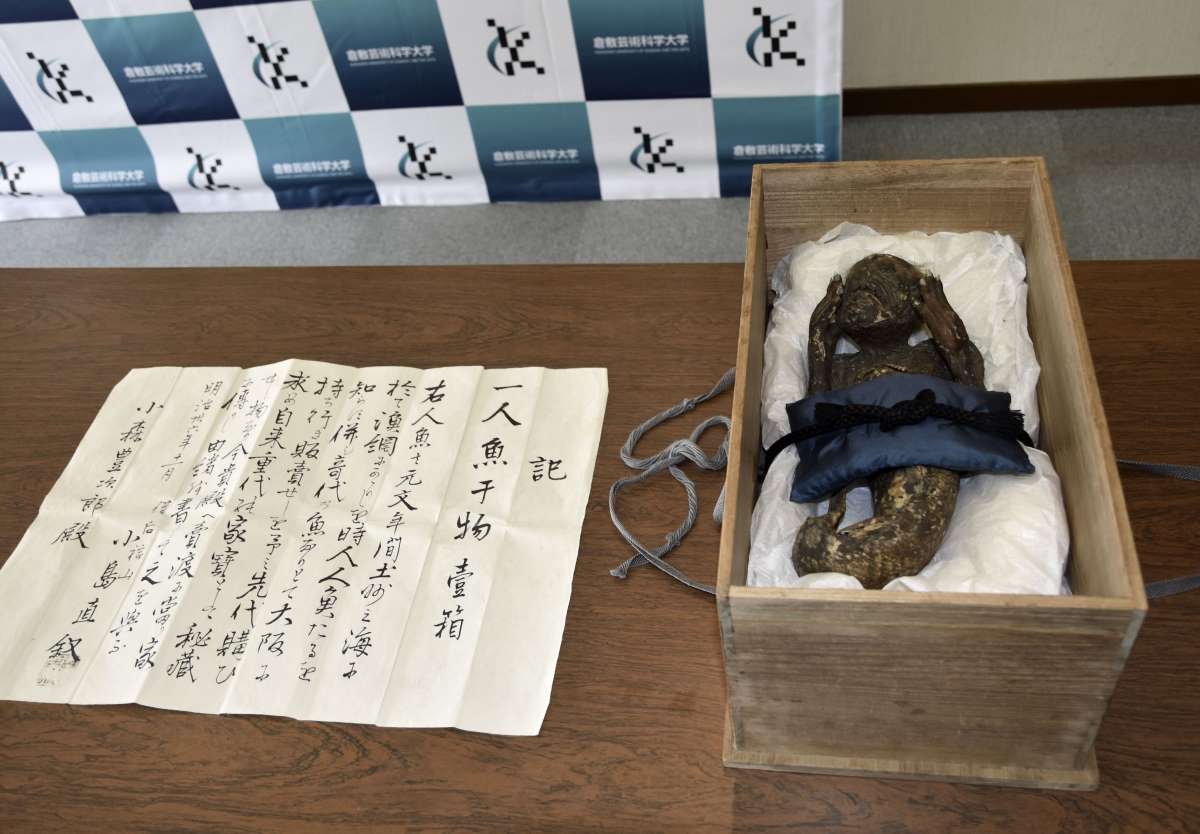 A rarity is preserved at a Buddhist temple in Okayama Prefecture. It is labeled: “Mermaid Mummy.”

A new project has just started to shed light on this mystery scientifically ー and from perspectives of folklore. A team of researchers has been conducting a full-scale investigation using computed tomography (CT) to analyze the internal structure of the mummy, along with radiatiology and DNA testing. The final report of their findings is expected in the autumn of 2022.

About 30cm in Length

The temple of Enjuin is in a mountainous area of the city of Asakuchi in southwestern Okayama Prefecture. The mummy, which has been stored securely in a paulownia wood box at the temple, was taken to Kurashiki University of Science and the Arts (Kurashiki City, Okayama) in February.

A group of three experts have taken up examination of the mermaid mummy. Professor Takafumi Kato, a specialist in paleontology, is playing a leading role, with other experts in ichthyology and molecular biology on the team.

In its interim report in April, the team revealed results of the CT and electron microscope analyses, as follows:

Meanwhile, the mummy has a dorsal fin and caudal fin on its lower body, which is covered in scales.

The report continues, explaining that while the upper body looks like that of primates, some abnormalities are also found: The teeth are conical, a characteristic that can be associated with predatory fish. Things similar to scales are on the shoulder and the neck, but their features are different from those in the lower body.

Using DNA testing and radiocarbon dating, the researchers plan to explore whether any creatures similar to the mummy are known to exist and what embalming techniques were employed for it. The experts say they will get to the bottom of the mystery without prejudgment.

The research is aimed not only at unveiling what the “mermaid mummy” really was, but also examining the cultural background in which it was so important.

A clue to understanding the mummy’s history may lie in a note found in the same paulownia box as the mummified mermaid. Explanations in the note read in part:

The mummified mermaid was caught in a fishing net in waters off Kochi Prefecture, Shikoku Island, during the Genbun period (1736-1741) in the middle of the Edo era. It was then put on sale in Osaka and was purchased by the affluent Kojima Family of Fukuyama, in Hiroshima Prefecture. It was treated by the family as a cherished heirloom. Then in the 36th year of Meiji (1903), the mummy was handed over to a man named Toyojiro Komori.

According to Chief Priest Kozen Kuida, the mummified remains have been kept at the Enjuin temple since toward the end of the Meiji Era (ending 1912). But how they ended up inside the temple is a mystery.

The mummy created a stir again around 1975, when it was taken up by newspapers and television, and at times being put on display in a glass case for public viewing. Chief Priest Kuida’s predecessor, however, put a stop to the public viewing. Thereafter, access to the mummy was limited to parishioners and a few others with knowledge of its existence, he explained.

Local residents in a study group researching their region’s history prompted the launch of this project.

A member of the group, a naturalist from Okayama Prefecture, discovered film negatives of the mummy during his research. Hiroshi Kinoshita, a board member of the Okayama Folklore Society and an advisor to the local history group, then visited Enjuin Temple with other group members. They confirmed that the mummy still exists.

A curator at the Kurashiki Museum of Natural History is also a member of the group. That has led to the emergence of plans to have the mermaid mummy displayed in an upcoming exhibition on yokai (fantastical creatures of Japanese folklore). Along with it, full-scale research of the mummy will be conducted, with cooperation of Kurashiki University of Science and the Arts.


Legend of Eternal Youth and Immortality

A legend goes that you will acquire eternal youth and immortality if you eat the meat of a mermaid. Along with it are anecdotes from various parts of the country about women called yaobikuni, nuns who are said to have lived more than 800 years after eating mermaid meat.

On the other hand, Kinoshita points out that in the Edo period there were groups producing fake mermaid mummies in and around Wakayama Prefecture. He surmises that the bogus mummies might have been spectacles drawing visitors at such places as show tents, while some might probably have been exported to Europe as bizarre curios.

In fact, the British Museum has a mermaid mummy allegedly from Japan, which has been displayed with an explanation to the effect that it “was made of a combination of a monkey and a fish.”

While identification of the mummy at Enjuin Temple will have to wait for the research team’s final report in the autumn, clearly it has served as a foundation of support for people yearning for good health and longevity.

Chief Priest Kuida noted, “Even if the mummy turns out to be a fake, that cannot diminish the role it has played as an object of worship, and the thoughts and feelings of people will not change.” Whatever the studies conclude, the mermaid mummy will continue being preserved by the temple as its treasure, the priest added.

Before the final report comes out, the mermaid mummy is scheduled to be put on display at the Kurashiki Museum of Natural History from July 16 through September 25.

RELATED: Can Ward Off Pestilence? Supernatural Monster ‘Amabie’ Goes Viral in the Face of Pandemic