Up Close and Personal with Japan's Wildlife 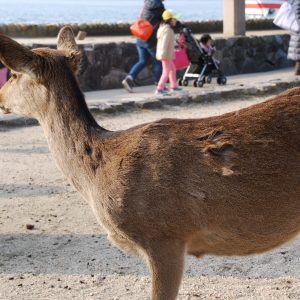 To anyone familiar with Japan it should not come as a surprise  that mascots, animal-themed products, and services cover most of the cultural landscape. Everything from the Olympics to gas companies and Pokémon seems to have a cute, plushie mascot to help make their products more appealing. Innumerable amounts of cat, dog, owl, hedgehog, and other “animal cafes” pop up in rather unexpected places around Japan.

While it’s a little bit fun to cuddle up next to a cat and enjoy a coffee, there are plenty of places outside the confines of a cafe in Japan where you can get up-close and personal with animals. Away from Tokyo, a few places that come to mind are the deer parks of Nara, Miyajima nearby Hiroshima, the fox village of Mt. Zao in Shiroishi, and the onsen-dwelling macaques of Nagano.

Anyone who has been to Nara will tell you deer are literally everywhere! Much like the cows of India, they have free range to travel anywhere they please—including the road sometimes. In an interesting case of learned behavior, the deer of Nara are always on the prowl for a tasty shika senbei or “deer cracker” that tourists can purchase and feed them.

Much to the surprise of many first-time tourists, the deer show exceptional manners. When they see the food, they bow their heads and, as a reward, can be fed the crackers. But beware! Sometimes this bowing is a way to show that they are preparing a headbutt.

The deer have become a cultural symbol of Nara, appearing on many crests and embroidery that can be found in shrines, company logos, and even the city’s mascot. During a trip to Nara in March 2018, I had the opportunity to get very close to these serene, docile animals. I purchased a pack of senbei and tentatively approached a friendly-looking doe, then waited for it to bow before bestowing it with the treat. Fortunately, it was more interested in the food than headbutting me!

Unlike Nara, Miyajima does not offer an opportunity to feed the deer. However, just like Nara, the deer have free roam of the island. As such, it is possible to capture a photo which includes the famous Itsukushima shrine together with the perhaps equally famous deer of this particular island near Hiroshima. During my visit there, I managed to photograph many of the deer, and a couple of red kites circling over the ocean while attempting to catch fish. This accumulation of events truly allowed me to appreciate the island’s nature and environment.

Having seen the famous onsen-dwelling Japanese Macaques almost 10 years ago, I remembered that in some locations it was possible to get quite close to them. Unlike many other simian species that can be aggressive towards tourists, such as the Barbary Macaques of Gibraltar, the macaques of Japan are more docile and fairly comfortable in the presence of humans.

As you’re probably aware, the macaques are famous for their behavior of inhabiting hot springs to maintain their body temperature in the cold months of winter. Like all simian species, they participate in group behavior, such as grooming and play fighting, and have been observed to “roll snowballs.”

All in all, there are plenty of choices out in the wilderness of Japan for any animal lover. They are guaranteed to pique your interest with no added “monkey business.”

Oliver Trapnell is an exchange student at Waseda University and travel blogger based in Tokyo, Japan. He is originally from Berkshire in the United Kingdom.