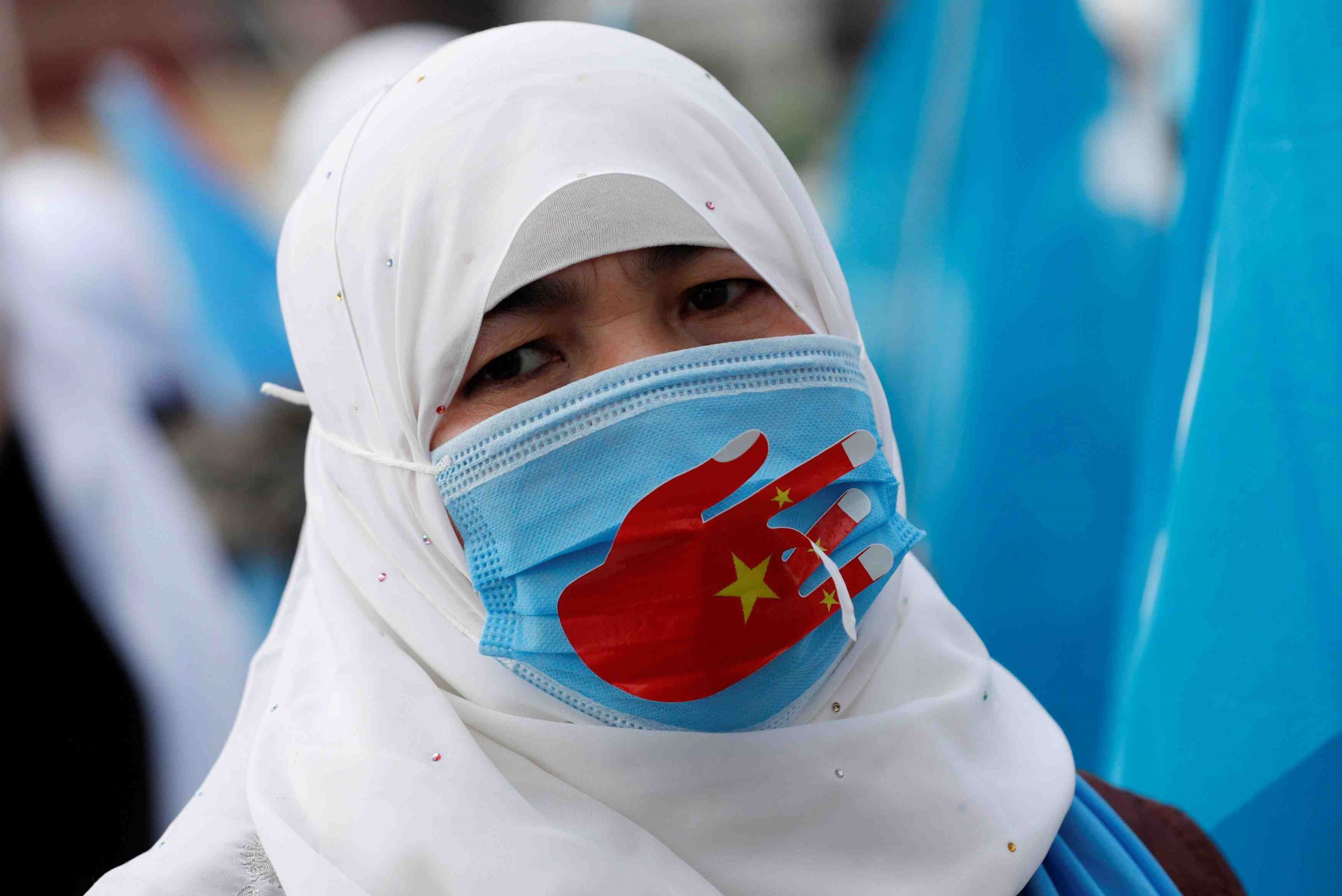 An Ethnic Uighur demonstrator wearing a protective face mask to prevent the spread of the coronavirus disease (COVID-19), takes part in a gathering on the occasion of International Women's Day to protest China's treatment of Uighurs, in Istanbul, Turkey March 8, 2021. REUTERS/Murad Sezer

A Uyghur woman, detained by the Chinese authorities for almost a year and a half in the autonomous region of Xinjiang as part of China’s crackdown, agreed to be interviewed by The Sankei Shimbun in France, where she is a refugee.

“The women’s screams echoed throughout the camp ceaselessly,” she told Sankei.

Her testimony exposes the torture faced by the Uyghur minority and the harrowing truth behind China’s “re-education” program that aims to coerce loyalty to the Chinese Communist Party.

Our interviewee is Gulbahar Jalilova, 56, a Kazakh trader. In May 2017, she was detained by Chinese authorities on suspicion of aiding terrorism during her visit to Urumqi, the capital of Xinjiang. She was held until September 2018 at a Uyghur women’s camp, where detainees were repeatedly interrogated and tortured, some having their nails torn off.

Ms. Jalilova recounted how the women were forced by the male officers to strip without warning. “We were humiliated and made to feel ashamed about our body as Muslims,” she said bitterly. Some detainees were given injections and unknown drugs without explanation, stopping the cycle of periods for some women.

Restrained with Handcuffs, Legcuffs, and Chains

Ms. Jalilova had been traveling to Urumqi for over 20 years from Kazakhstan, which is adjacent to Xinjiang, for work. In May 2017, after spending a night at her usual hotel, she was suddenly detained by three police officers who confiscated her passport and mobile phone. She was taken to the police station, where she was forced to “confess” that she had “aided terrorism” by transferring money worth ￥200,000 JPY ($1,800 USD). When she insisted that there was a misunderstanding and asked for a lawyer, the police beat her and took her to “Sankan,” an old internment camp.

Once Ms. Jalilova arrived at the camp, she was forced to strip and provide a urine sample for testing. They gave her a “uniform” that consisted of a yellow secondhand jacket and trousers. She was unable to move freely because they had used handcuffs, legcuffs, and chains to restrain her. The legcuffs weighed nearly five kilograms.

About 40 women were crammed into one 7-meter by 3-meter cell, which was fitted with a speaker and surveillance camera. More than half of the women were in their twenties or younger. All of their heads had been shaven.

They had no beds to sleep on, and the lack of space meant they had to take turns sleeping at night. Half of them stood up for two hours while the other half slept. They had to endure winter in Urumqi — which can get as cold as -5 degrees Celsius — without blankets.

All conversation and Islamic prayer were strictly prohibited. Detainees were shouted at to stop praying if they were caught sitting cross-legged on camera.

They were given three meals per day, consisting of soup, water, and a small piece of bread. The soup contained wheat noodles in the morning and Chinese cabbage or cucumber in the afternoon and evening. Detainees were forced to sing praises of the Chinese Communist Party before each meal.

Interrogation was the women’s greatest fear. Detainees were summoned individually through the speaker, then taken away to another room by an officer who covered their heads with a black hood. Some women were not returned to their cell for more than two days. Those who were returned came back dazed and traumatized by their ordeal.

“Some women were tortured during the interrogation by having their nails torn off,” Ms. Jalilova said. Some came back with puncture wounds caused by a needle.

Ms. Jalilova was first interrogated three months into her detention. From 8 P.M. to 9 A.M. the next morning, she was bound to a chair with a steel ring, forced to sign a confession admitting the charges, and beaten and tortured with a stun gun when she refused. She lost consciousness several times.

The mental health of some of the women in her cell deteriorated. Ms. Jalilova would never forget seeing a woman rubbing her face with her own feces, muttering, “I will become a man.”

“I think she thought she was giving herself a beard. She may have been sexually assaulted,” speculated Ms. Jalilova.

Another woman slammed her head against a concrete wall repeatedly in an attempt to commit suicide. She was caught on camera and taken away. The woman never returned.

Every Friday afternoon was “education” time, during which they were shown a 20-minute video praising President Xi Jinping and a video of new railways and roads in Xinjiang, while the officers explained the “wonderfulness” of the Belt and Road economic development initiative. At the end of the session, they were given a piece of paper and pencil for their homework titled “My Gratitude to the Supreme Leader for Saving Us from Poverty,” in which they also had to express self-criticism for “biting the hand that feeds us.”

If the essay was not completed by Monday morning, food was taken away as punishment, or the detainee was imprisoned in the “punishment room” ー a small, two-meter-square room that had a wooden box with a hole for a toilet and no windows.

Sometimes a group of about 10 officers came to her cell and ordered the women to strip, put their hands on their heads, and bow three times. During the interrogation, Ms. Jalilova was attacked by a young police officer who had taken his pants off.

When she pleaded, “You also have a mother. How could you do this?” The officer replied, “You are a beast. You have no family.”

A Mysterious Drug Injected Every 10 Days

Every 10 days, the officers pulled the women’s arms through the door of the cell and injected them with a mysterious drug. The women received no explanation and felt dizzy afterward. They were then forced to swallow a pill. Nearly 60% of the women in the camp were in their twenties or younger, but many of them stopped having their periods after the injection. Ms. Jalilova was one of them.

In September 2018, she was suddenly released after receiving a physical examination at the hospital. Her weight had dropped from 65 kg to 45 kg. They gave her nearly 20 tablets and checked inside her mouth to see if she had swallowed them. Her leg cuffs had rusted after nearly a year and a half and could only be removed using pliers.

Before she returned home, a police officer warned her to keep silent about her time at the camp because she would still be under surveillance outside the country. He told her that revealing anything about her time in the camp would have bad consequences for her family. After returning to Kazakhstan, she relied on her relatives to travel to Turkey first and then to France, where she applied for political asylum.

The Crackdown on Uyghurs

Under the pretense of preventing terrorism, Chinese authorities are accused of detaining and forcing sterilization and labor on the Uyghurs and other Muslim minorities in the Xinjiang Uyghur Autonomous Region of China.

In January 2021, the former U.S. Secretary of State Mike Pompeo officially declared that China’s treatment of Uyghurs was “genocide.”

In April 2014, there was a bombing incident in the Urumqi railway station in Xinjiang. During a key meeting the following month, President Xi called for “decisive actions against terrorist attacks.” When Western media questioned China about the internment camps, Chinese authorities legally formalized their existence under the label “vocational education and training centers” in October 2018.

In its 2020 Annual Report, released in January 2021, the Congressional-Executive Commission on China (CECC), a U.S. bipartisan agency that monitors human rights issues in China, reported that a total of up to 1.8 million people may have been detained in these camps.

In February 2021, the BBC reported the testimony of a Uyghur woman who allegedly suffered systematic sexual assault in one of the camps. In January, a spokesperson for Xinjiang said that vocational training ended in October 2019.