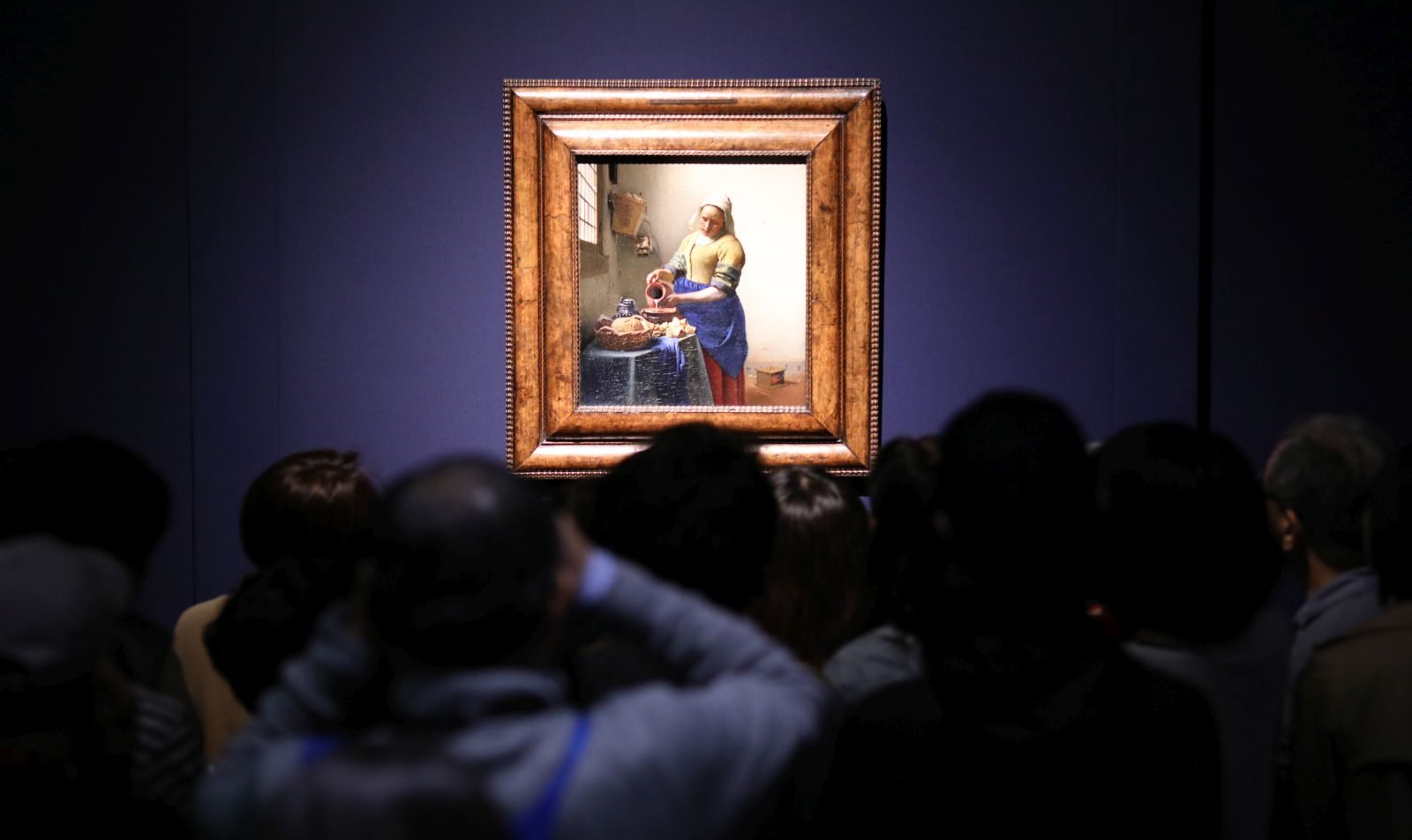 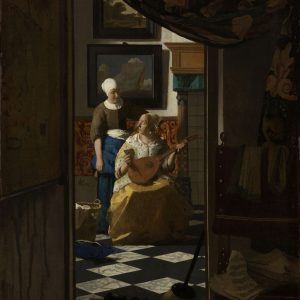 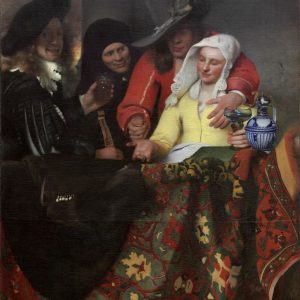 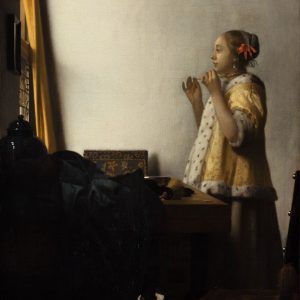 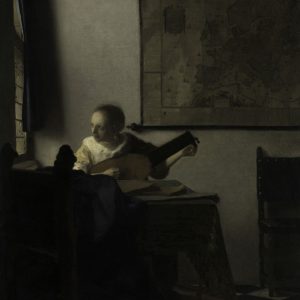 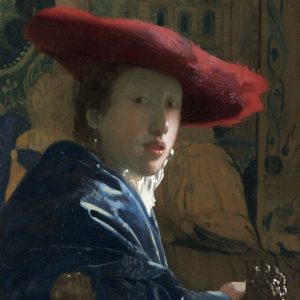 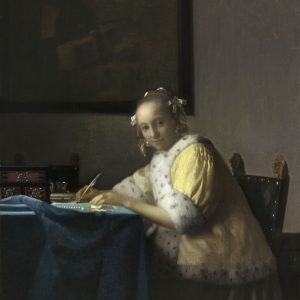 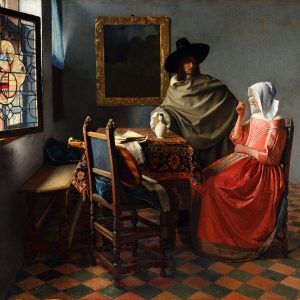 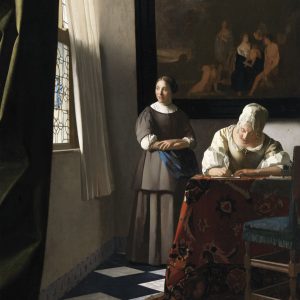 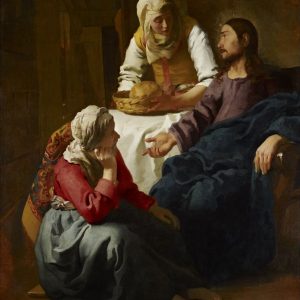 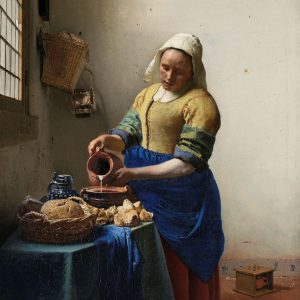 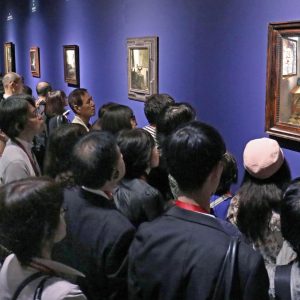 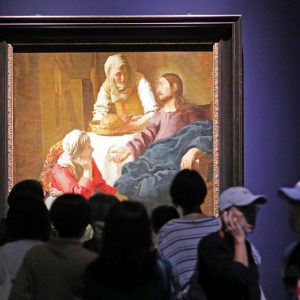 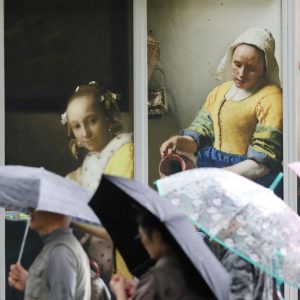 An exhibition of works by Dutch painter Johannes Vermeer opened at the Ueno Royal Museum on Friday, October 5, to a big crowd, and by February, the masterpieces of the 17th century artist — often called “a magician of light” — will be on display at the Osaka City Museum of Fine Arts.

For this exhibition, the Ueno Royal Museum has introduced an appointment system to reduce waiting time for visitors’ entry. Visitors select a date and time slot for their visit and then pre-purchase a ticket over the internet or at the museum’s ticket window.

There is an admission fee for the event, but the art museum decided to lend all the visitors an audio guide free of charge to facilitate appreciation of Vermeer’s masterpieces — nine of which will be on display here until November 30.

More than 300 visitors stood in line at 9:30 A.M. on the event’s opening day. They were admitted smoothly according to their ticket admission time soon after the museum opened.

Hidenori Tanaka, 46, from Tokyo’s Taito Ward, was one of those who waited in line. “I think the ticket system is good as it serves to reduce many wasteful hours of waiting to get in. I was glad to be able to see this many works of Johannes Vermeer all at once, and at the same time see them at closer range. I think the real thing is outstanding. I would like to visit again,” he said.

The self-employed Tanaka added that he appreciated the chance to enjoy the Vermeer masterpieces during his free time, before heading to work.

What: Exhibition: Making the Difference, Vermeer and Dutch Art

Where: The Ueno Royal Museum

Tickets: Tickets for scheduled entry from now to November 30 are available over the internet or at the museum’s ticket window

Limitations: All tickets are sold, and entry is limited, by date and time through the advance reservation system

Audio Guides: All visitors will be loaned an audio guidance free of charge.

A 10th Vermeer painting, not included in the Tokyo show, will go on display in Osaka beginning on February 16, 2019.

“This is a major event. It is a historic art exhibition,” said Seijo University professor emeritus Nobuyuki Senzoku, a supervising curator on the Japanese side, as he stressed the importance of the event.

Johannes Vermeer died at the young age of 43. There are around 35 of his artworks surviving. The Tokyo exhibition displays nine of his top masterpieces in an exclusively domestic event. Combined with the Osaka exhibition, this is said to be a great opportunity to appreciate 10 masterpieces comprising nearly 30% of his surviving artworks.

The Tokyo exhibition shows nine paintings, including two for a limited time only, while the Osaka event displays six Vermeer paintings.

Four artworks — The Milkmaid, The Wine Glass, Woman with a Pearl Necklace, and Girl with the Red Hat are on display only in Tokyo.

The Love Letter can be seen only in Osaka.

More and more art lovers in recent years aim to see all of Vermeer’s surviving paintings. Many are willing to travel and explore museums housing his masterpieces that are scattered around Europe and the United States. It is rare to find so many pieces together, such as the offering of the Tokyo-Osaka exhibitions.

The Thursday October 4 ceremony was also attended by Ingrid van Engelshoven, Minister of Education, Culture and Science of the Netherlands.