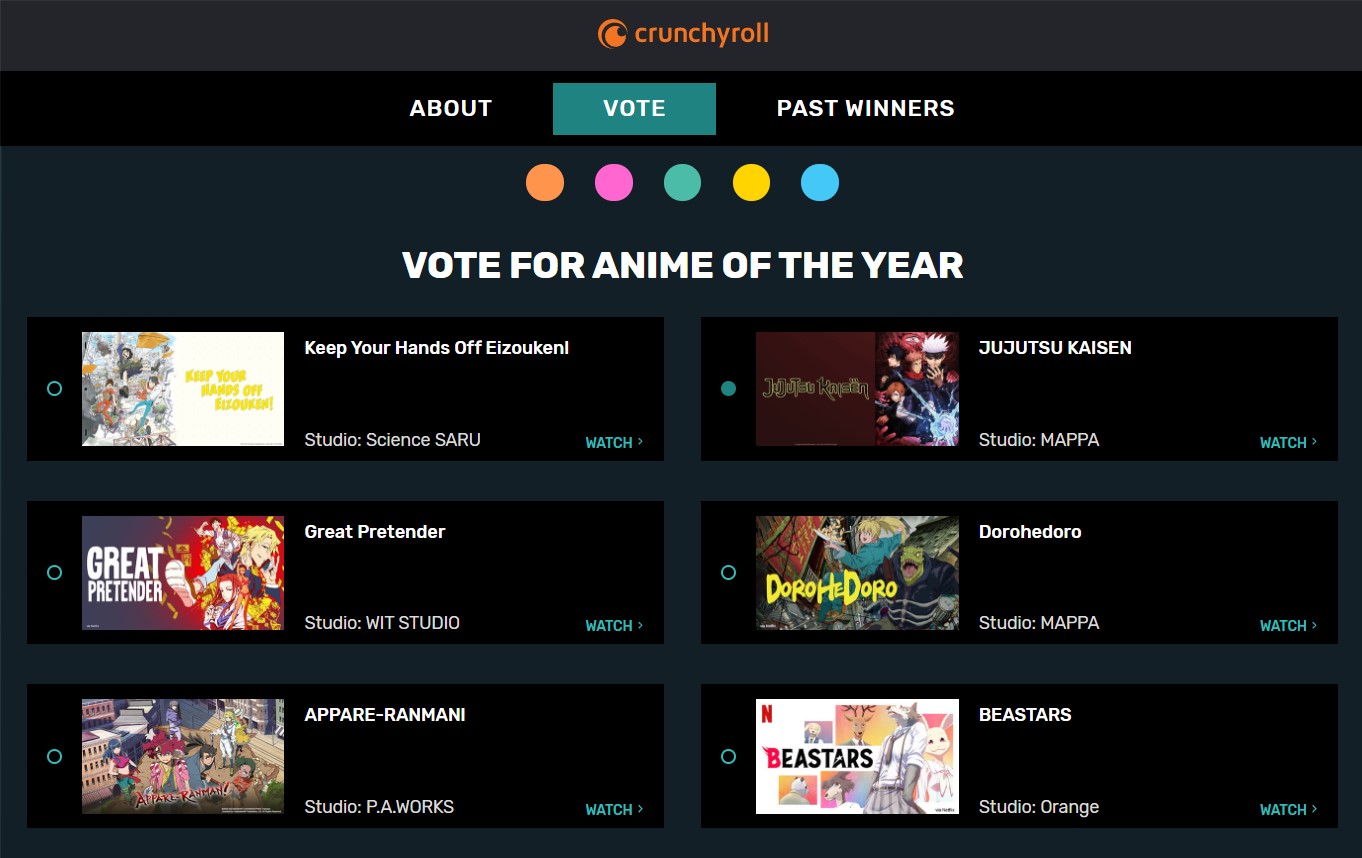 If fans were to choose a favorite anime, what would that be?

Crunchyroll, the popular streaming website based in the U.S., has held the Crunchyroll Anime Awards annually since 2017, where anime fans can vote for their favorite anime going into the new year.

The awards can be a good way of getting the pulse of which among the newest anime on the block are gathering increasing attention.

For example, in 2020 the Anime of the Year winner was “Demon Slayer” (ufotable, 2019), which went on to even further explosive popularity in Japan with its new movie Kimetsu no Yaiba in 2020.

The awards are divided into categories ranging from the prestigious Anime of the Year, to Best Protagonist, Best Antagonist, Best Director, Best Animation, and so on, for a total of 18 categories.

Voting for this year’s anime awards started on the weekend of January 16, and when they did the topic was trending on Twitter.

Among this year’s candidates for Anime of the Year is Keep Your Hands Off Eizokuken! (Science SARU), a series about three young girls with big imaginations of dreaming about making an anime.

The anime is directed by Masaaki Yuasa, the prestigious alternative and futuristic anime director famous for Devilman Crybaby (2018), The Night is Short, Walk On Girl (Yoru wa mijikashi aruke yo otome) (2017).

The production company MAPPA is bringing two anime to the top category, with Dorohedoro, a fantastical story with a part human protagonist who is trying to return to his human form, and Jujutsu Kaisen, a story about using magical powers to control negative energy.

The latter has a particularly strong presence on Netflix Japan, and has been trending since the latter part of 2020.

Two other candidates in the Anime of the Year category include Great Pretender, an anime a little reminiscent of the Lupin-like swindler plotline, and Beastars, a series about a universe where carnivore and herbivore andromorph animals coexist, until an event happens that breaks the balance.

Other notable mentions include the nomination of the main character of HAIKYU!! TO THE TOP for Best Protagonist, and of Overhaul in My Hero Academia 4 for Best Antagonist.

However, the list is by no means exhaustive of all anime out there at the moment.

Some netizens have been quick to point out, for example, that the Final Season of Attack on Titan, which just started in December, is not present on the list.

Voting is open until Friday, January 22. What is your favorite anime? Has it been left out of the list? Let us know in the comment section below!