Welcome, Your Holiness, We Share Your Values in Japan 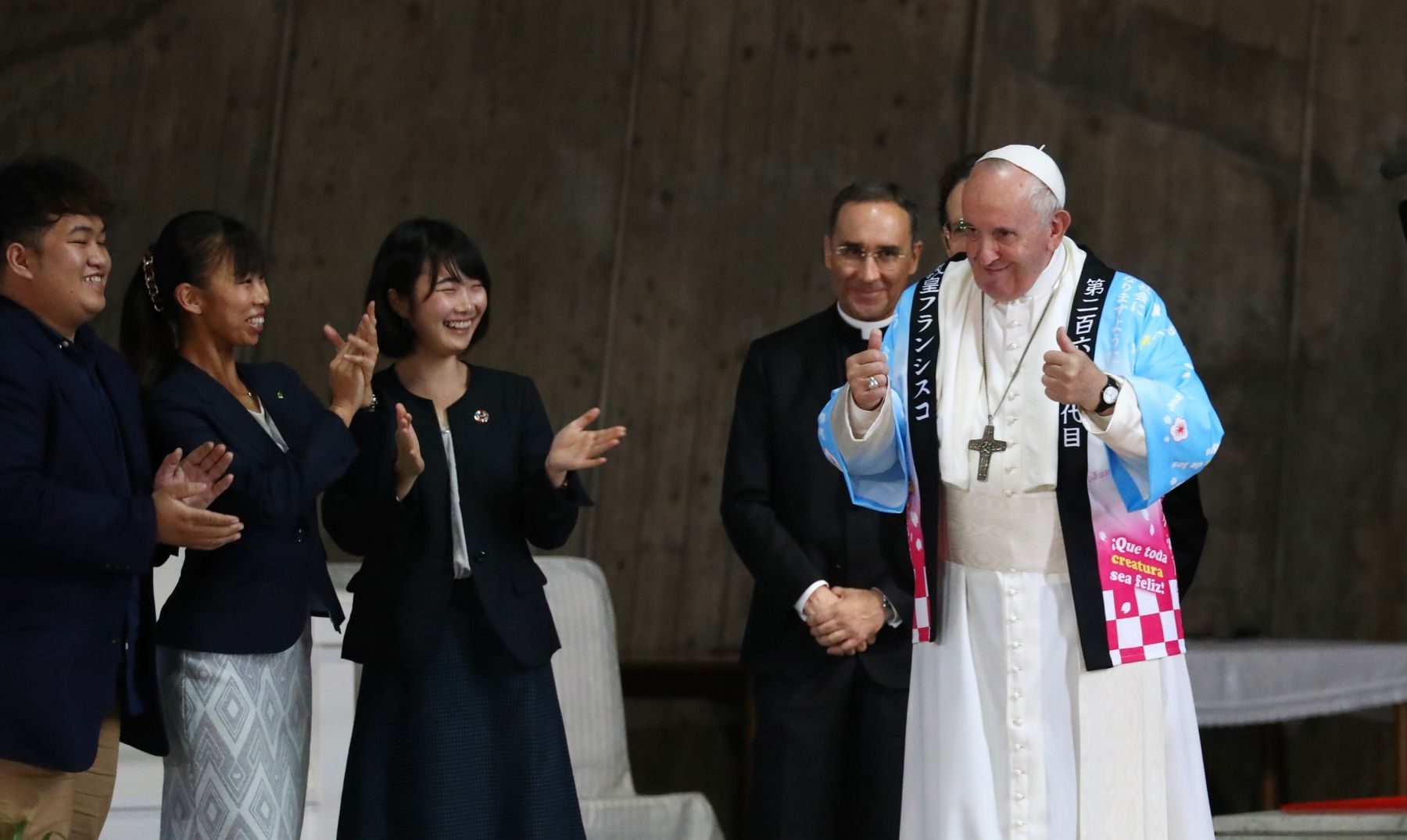 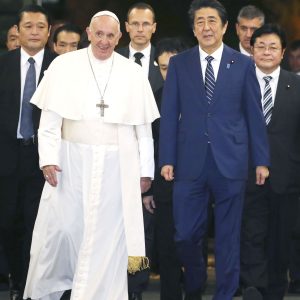 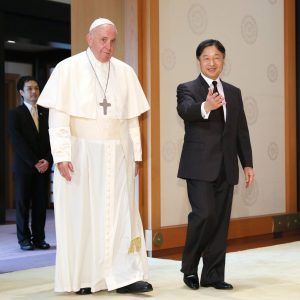 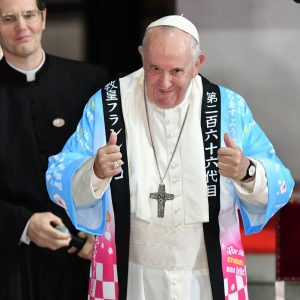 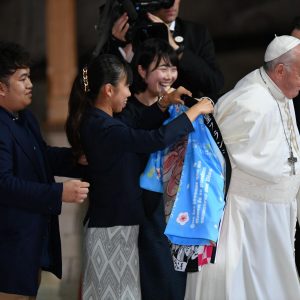 Pope Receives Handmade Gift with his Manga Image in Tokyo 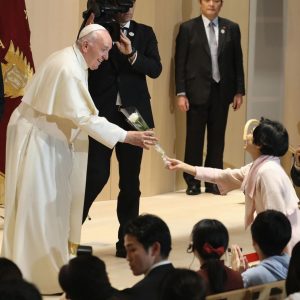 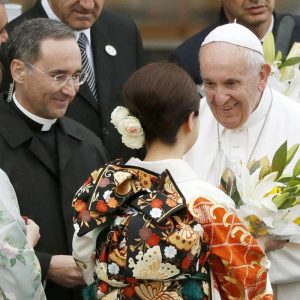 Flowers for the Pope in Japan

We learned this week that a man who uses the name “Francisco” — the same name as the Pope — is the Deputy Prime Minister of Japan. This remarkable fact about Taro Aso, who is also Japan’s finance minister, was revealed by Japan’s Prime Minister Shinzo Abe when Pope Francis visited the political elite in Tokyo.

In a charming speech, which had all the hallmarks of his special advisor Tomohiko Taniguchi, Mr Abe said: “I have learned that Pope Francis has had a strong desire to visit Japan since he was young. A great many people have come in hopes of meeting you, your Holiness, including Deputy Prime Minister Taro Aso, who is sitting right there.”

The media coverage of the Pope’s official visit made a refreshing change from the political squabbles about how many people Mr. Aso and Mr. Abe had invited to cherry blossom viewing parties in Tokyo. It also eclipsed discussions about corruption, which the leaders would like to push into the background. Like a good priest’s sermon, Mr. Abe’s speech, which he delivered in front of the Pope, was designed to direct people’s attention to higher matters.

It suggested that in terms of ethics, Japan and the Vatican aim for the same goals. And it implied that Christians, such as Mr. Aso, are helping to set the national moral agenda.

Yet Japan is not a Christian country. When I last wrote about this topic for the BBC in 2008, I noted that only about one percent of Japan’s population identifies as Christian. My guess is that, since then, there has been a decline in the proportion of Christians, although there has probably been some growth in the congregations of a few lively churches.

The press does not care about the distinctions between spiritual and secular. The Pope’s visit generated enormous media interest. This was mainly a visual story and the highlight for TV was when Pope Francis held a Mass at Japan’s largest venue, the Tokyo Dome, attended by 50,000 people. The Pope’s official translator, Father Renzo De Luca, told Vatican News that he was amazed at how much coverage Pope Francis’ visit generated.

“So many people are really interested. They are following what the Pope says and where the Pope goes. People are wondering what Pope Francis will have to say to a non-Catholic country like Japan, and also what he’s going to say about peace, atomic energy, and nuclear disarmament — topics that are very crucial in Japan,” said Father De Luca.

Inevitably, the nuclear issue was high on the agenda when the Pope visited Hiroshima and Nagasaki. His words resonated across the globe.

Pope Francis said in Nagasaki: “Peace and international stability are incompatible with attempts to build upon the fear of mutual destruction or the threat of total annihilation.” He suggested that the nuclear arms race wastes resources which could instead improve people’s lives and protect the environment:

In a world where millions of children and families live in inhumane conditions, the money that is squandered and the fortunes made through the manufacture, upgrading, maintenance and sale of ever more destructive weapons are an affront crying out to heaven.

As the only country to have experienced the horror of nuclear devastation in war, Japan is a country with a mission of leading the international community’s efforts to bring about a world free of nuclear weapons.

For seventy-plus years since the war, we in Japan have single-mindedly and unwavering pursued peace and freedom. At the same time, however, when we enjoy peace, we recognize that there are people being persecuted. There are people imprisoned without cause, waiting for release.

That may have prompted the Pope to think about the issue of religious freedom in other parts of Asia. Just as Mr. Abe was speaking in Tokyo, the BBC ran a report about the lack of freedom for Muslims in some parts of China. It suggested that up to a million people are being held in detention camps.

This issue has provoked much anguish in both Muslim and Christian countries. The Vatican has limited influence over China’s approach to Muslims, but it has tried to support Christians in Asia.

The Vatican’s support includes Christians in Taiwan, the breakaway island state which follows a pluralistic approach to religion as well as politics. As things stand, the Vatican is the only state in Europe to recognize Taiwan diplomatically.

However, there is much speculation that the Vatican may change its position. The theory is that the Pope will do a deal with China, which will see the Vatican relinquish its special relationship with Taiwan, in order to become an official church on the mainland.

John L. Allen Jr, who is the editor of the religious website Crux, writes, “It seems reasonably obvious that one day, sooner rather than later, they’ll downgrade the papal mission in Taipei in favor of diplomatic recognition by Beijing.”

Mr. Allen, who has written 11 books on the Vatican and Catholic affairs, says:

Rome wants the ability to help shape the international agenda that comes from full diplomatic relations with one of the world’s economic and military superpower and a nation whose population represents almost one-fifth of humanity.

He also suggests that the Vatican wants greater religious freedom in China, “not only for the small Catholic minority there but for other religious sub-groups as well, including Uighur Muslims in the northwestern part of the country.”

This chimes with the idea that for the Pope and other people of faith, religious freedom for both Muslims and Christians is crucially important.

This puts them on course for conflict with China, which is officially an atheist state. Surely, this point must have been on the mind of Mr. Abe’s speech writer when he warned that, “there are people imprisoned without cause, waiting for release.”

That phrase carries extra resonance for Christians, who remember the words of Christ, quoting from the Prophet Isaiah, when Jesus said he had come “to preach deliverance to the captives.”

Although it’s not a Christian country, modern Japan welcomed the Pope with a clear conscience. Pope Francis does not see eye-to-eye with the Japanese government over some contentious issues, like the death penalty. But he acknowledges with gratitude the freedom enjoyed by religious people, including Deputy Prime Minister “Fransico” Aso.

This provides reassurance that, in Japan, all forms of faith are protected. And for Prime Minister Abe, the Pope’s visit offered a precious opportunity to remind the world that Japan treats spiritual matters with the same deep respect as the world’s most sophisticated democracies.

Duncan Bartlett is the editor of Asian Affairs and the author of the weekly blog Japan Story. He formerly worked in Tokyo for the BBC.