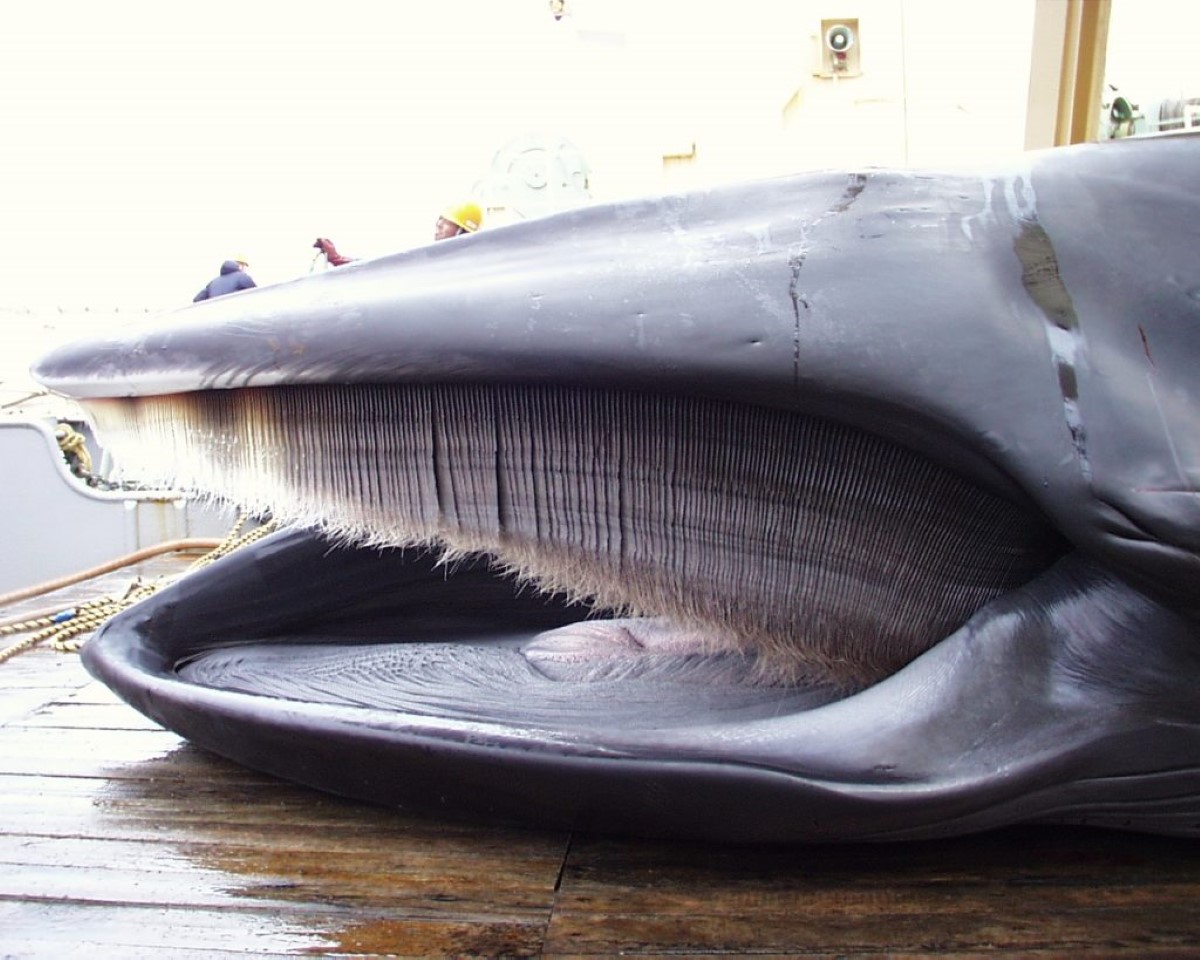 The mouth of an Antarctic minke whale showing its baleen. (Courtesy of Institute of Cetacean Research.)

The Institute of Cetacean Research (ICR) contributes to research on whales and other sea mammals, as well as the sustainable use of marine resources.  As part of its outreach activities, the ICR is often involved in events and special exhibitions connected to whales, and has received a variety of donated artwork and other items since it was founded. In addition, its workers often purchase rare whale-related items while traveling or on business trips.

As a result, the ICR now has a wide-ranging collection of unique whale objects, both modern and antique, from many corners of the globe. In this series of articles, we will gradually introduce items from this collection.

We begin with Japanese artwork and crafts made from whale baleen.

Baleen, also known as whalebone in the West and kujirahige (whale whiskers or mustache) in Japan, is actually neither of those things. It is, for instance, unrelated to the whiskers that grow around the mouths of animals such as cats and dogs.

In the former group, baleen grows in 200 to 400 narrow, triangular plates attached to the upper jaw, arranged like the prongs of a comb. As for their purpose, the baleen serves as a filter inside of the mouth of a whale, filtering out small fish and krill from ocean water.

Baleen is composed of keratin, the same material found in our fingernails. Because it is very light, and relatively hard, yet flexible, it has been used for various purposes since antiquity. For example, it was traditionally used for the springs in Japanese mechanical dolls, and is still used in items such as fishing rods.

The sailing ships below are made from baleen. In the single ship shown in a photograph of its own, minke whale baleen is used to give the ships’ sails an animated appearance. At the same time, the color of baleen varies among different species of whales, adding character to the artworks in which it is used. The differences are evident in the image of two ships. The material used for the sails in the piece on the left is fin whale baleen, while the body is made of sei whale.

Viewed up close, the natural beauty of the baleen is clear on the sails shown in the closeup image (upper right or center, depending on your viewing platform.)

You can read the rest of this story and learn more about artwork created from baleen at this link. This article was first published by Whaling Today on March 12,, 2022. Check out Whaling Today for deeper and unique insights into Japanese whaling culture, whale conservation efforts and sustainable whaling.

The final piece is a whale model made of baleen from a fin whale. It has a lovely rounded shape.

(This article is published in cooperation with the Institute of Cetacean Research. It was first published in Japanese by Kujira-Town. Let us hear your thoughts in our comments section.)