What Did China Make in the Wuhan Lab? 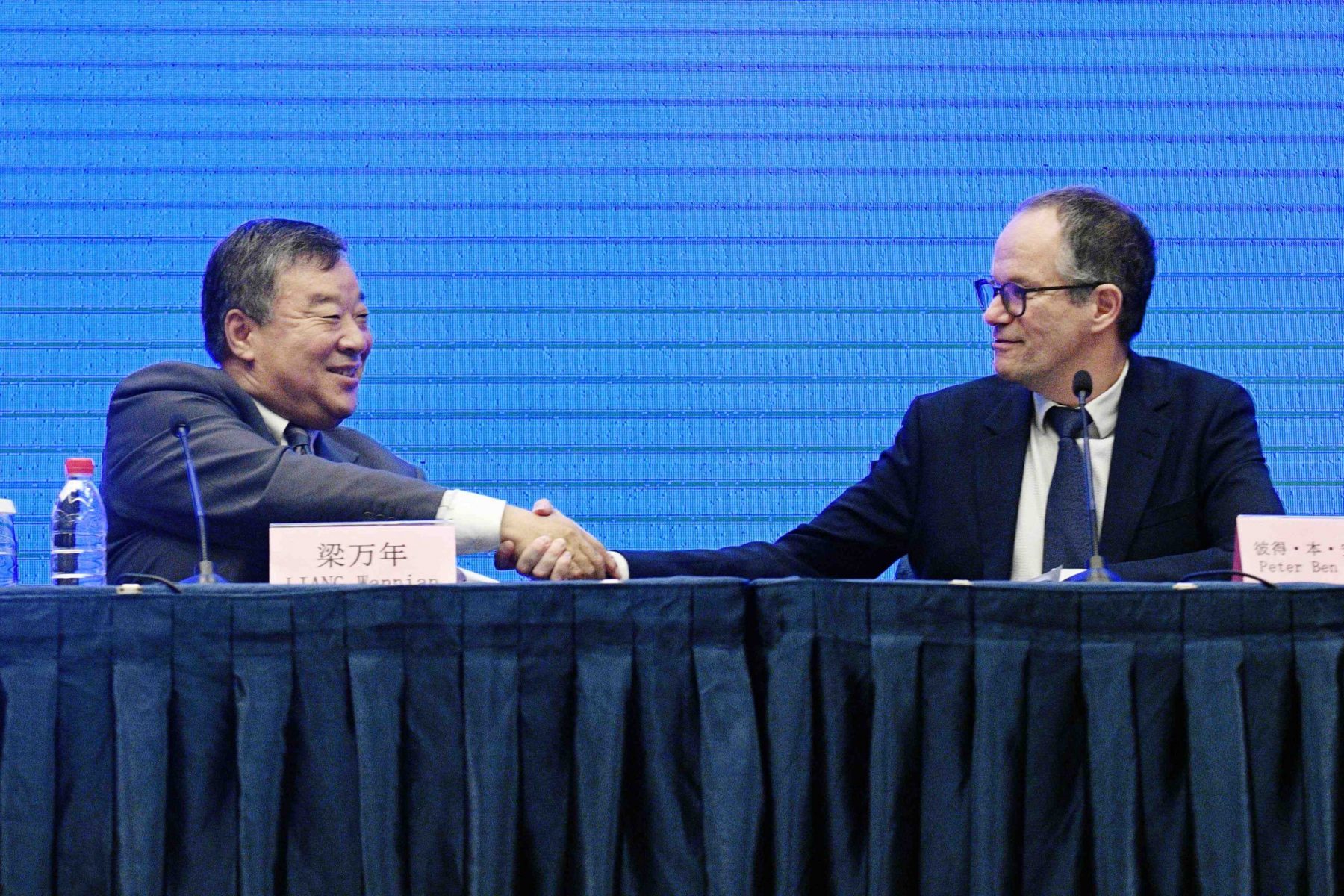 WHO-China joint study news conference on the study of origins of the coronavirus disease (COVID-19), at a hotel in Wuhan, Hubei province, China February 9, 2021.

On April 22, 2021, U.S. Senators Josh Hawley (R-Mo.) and Mike Braun (R-Ind.) introduced the COVID-19 Origin Act of 2021 in the 117th Congress, calling on the Director of National Intelligence to declassify information and intelligence relating to the origin of the COVID–19 virus, and its potential links with the Wuhan Institute of Virology (WIV) in China.

“For over a year, anyone asking questions about the Wuhan Institute of Virology has been branded as a conspiracy theorist. The world needs to know if this pandemic was the product of negligence at the Wuhan lab, but the Chinese Communist Party (CCP) has done everything it can to block any credible investigation,” they said.

Meanwhile, the global death toll from COVID-19 has reached a mammoth 3.24 million.

The Coronavirus continues to wreak havoc upon humanity. Its impact has been haunting and devastating, as people across the world continue to lose friends, family, and acquaintances. Should this not be enough for the Biden administration to make the decision to declassify and share with the world what it knows about the Wuhan lab, and of Beijing’s relentless attempts to cover up the origin of this monstrous pandemic?

According to Senator Braun, “Identifying the origin of the COVID-19 pandemic is vital for preventing future pandemics, and as investigations and research into the origins of the virus continue, the Biden administration should declassify intelligence related to any potential links between biological research laboratories in Wuhan, China and the COVID-19 pandemic.”

In fact, in March 2020, Senator Hawley was the first member of U.S. Congress to call for an international investigation into China’s coverup of the spread of the Novel Coronavirus, and had introduced legislation to allow American citizens to sue the Chinese government for damages, a month later.

The ongoing tsunami of global death and devastation make for a far greater obligatory responsibility of the U.S., as a torch bearer of the free world, to declassify any and all intelligence relating to the links of the origin of this coronavirus with the Wuhan Institute of Virology. Moreover, it remains a mystery as to how is it that, while the entire world suffered this pandemic’s first wave, and thereafter has been enduring its following devastating waves in the forms of many perilous mutations and variants of the original virus, China continues to remain unscathed from any of these mutant variants?


Beyond All Boundaries and Limitations

In its last few remaining days in office, the Trump administration made a series of claims about the Wuhan Institute of Virology in Wuhan, China, and its possible connection to the COVID-19 outbreak. The January 15, 2021, U.S. Department of State Fact Sheet, titled, “Activity at the Wuhan Institute of Virology,” called out the CCP for systematically preventing a transparent and thorough investigation of the COVID-19 pandemic’s origin, choosing instead, to devote enormous resources to deceit and disinformation. The Fact Sheet highlighted the CCP’s “deadly obsession with secrecy and control” that comes at the expense of public health in China and around the world.

Importantly, the State Department Fact Sheet was vetted and cleared for release by the State Department, the White House, the Department of Health and Human Services and U.S. intelligence community leadership. It highlights three critical elements about the COVID-19’s origin that warrant intense enquiry: 1) Illnesses inside the Wuhan Institute of Virology; 2) Research at the WIV; and 3) Secret military activity at the WIV.

In previous reports since 2014 on my research into military writings in China, it is pointed out that China’s strategic thinking has appeared to revolve around a premise that it should be prepared to conduct “warfare beyond all boundaries and limitations…” The Chinese text, War for Biological Dominance (制生权战争), emphasizes the impact of biology on future warfare and how biotechnology would assume shape of a new strategic commanding height in national defense.

Literature coming out of China amplifies that cross integration of biotechnology, engineering, and information technology will become the new strategic doctrine for future military revolutions. These writings consistently put forth that weaponization of living organisms shall become a reality in the future, with non-traditional combat styles taking center stage.

Foremost among the new-age defense high frontiers will be the biological frontier, and indeed, biology is demarcated as one of seven new domains of warfare. Since 2016, China’s Central Military Commission has been funding projects on military brain science, advanced bio-mimetic systems (that mimic biological systems), biological and bio-mimetic materials, and new-age biotechnology. Senior PLA officers argue that modern biotechnological development is gradually showing strong signs characteristic of an offensive capability, including the possibility of employing “specific ethnic genetic attacks” (特定种族基因攻击).

The 2017 edition of Science of Military Strategy (战略学), published by the PLA’s National Defense University, introduced a new section on “biology as a domain of military struggle.” This section discusses new potential kinds of biological warfare, including “specific ethnic genetic attacks.”

The Chinese military’s interest in contemporary advances in domains of biological warfare, biotechnology, and genetic engineering is further reflected through its strategic writings and research, which consistently argue that advances in biology are contributing to changing the form or character (形态) of conflict.


A Deeper Look Into COVID-19

The COVID-19 pandemic is evidencing itself as an ideal output of the above thinking, and its potential execution. Knowing that the WIV’s top-level biosafety laboratory (BSL-4) was relatively new, the U.S. Embassy’s health and science officials in Beijing decided to visit Wuhan and check it out.

The Embassy sent three teams of experts in late 2017 and early 2018 to meet with the WIV scientists, including Shi Zhengli, known to many as the “bat woman” because of her extensive experience studying Coronaviruses found in bats and how they infect humans. Based on their assessments and wariness, the officials warned Washington of the “risky Coronavirus experiments in a Wuhan Lab” by shooting off two cables. Alas, not much heed was paid to the cables at the time.

The March 2021 World Health Organization (WHO) issued a report which was marred by controversy in the U.S., Japan, and other countries that alleged it was lacking in crucial information, access, and transparency, and saying that a further, more intrusive investigation was warranted.

Japan’s Chief Cabinet Secretary, Katsunobu Kato said, “In order to prevent future pandemics, it is indispensable to carry out prompt, independent and experts-led investigations that are free of surveillance … We are concerned that the latest investigation faced delays and lack of access to essential virus samples.”

From managing to scuttle the WHO investigation in Wuhan, to continuing to obfuscate discussions and enquiries into the Wuhan lab, China has much to answer and repay the world. The world is standing at an uncertain crossroad today. It does not suffice for the Biden administration to simply “… call on the Chinese government to be more transparent and ask the WHO to complete a full and independent investigation.”

Neutrality, diplomacy, and display of an ambivalent posture towards China, in the midst of the present humanitarian havoc, shall only embolden Xi Jinping and the CCP to further their agenda of rewriting borders and re-creating history.

The experience and fallout of the 21st century COVID-19 pandemic will not be forgotten.

Dr. Monika Chansoria is a Senior Fellow at The Japan Institute of International Affairs (JIIA) in Tokyo. The views expressed here are those of the author and do not necessarily reflect the policy or position of The Japan Institute of International Affairs or any other organization with which the author is affiliated. She tweets @MonikaChansoria.  Find other articles on this and other topics by Dr. Chansoria here on JAPAN Forward.