Why Protest, China? The Term ‘Wuhan Virus’ Came from Beijing, Not Elsewhere 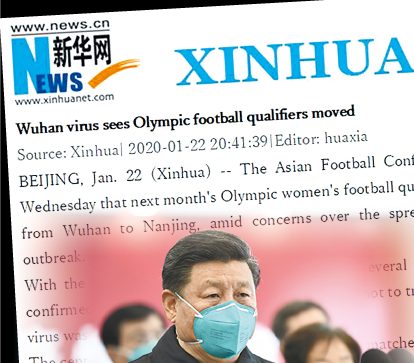 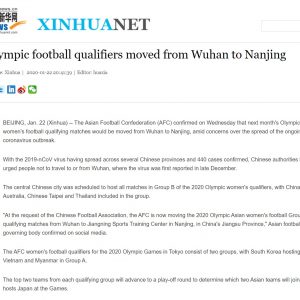 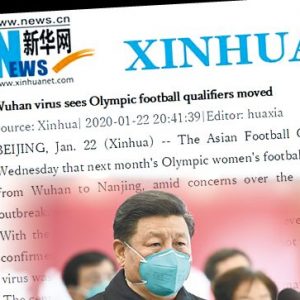 Xihhuanet English Language report before the Sankei report on its use of “Wuhan virus”.

Consider the above headline used by the official Chinese news agency Xinhua for its original online edition Xinhuanet, with a link to a Xinhua article with a Beijing dateline of January 22.

The original headline, shown in the photograph above, was changed and references to the Wuhan virus were later removed from the January 22 online version, but not until outside media including The Sankei Shimbun noted the term’s use.

The article in question explained that the Olympic women’s football (soccer) qualifying matches scheduled to be held in Wuhan in Hubei province in February 2020 would be moved to Nanjing “amid concerns over the spread of the ongoing coronavirus outbreak.”

Although China’s leaders are now frenziedly attacking the use of the term “Wuhan virus,” the fact is that they themselves previously used it in dispatches from their state-owned wire press service. It seems likely that officials at Xinhua were taken to task for this embarrassingly honest headline, although we have no evidence of that having actually happened.

Actually, could anyone back then have foreseen that a tiny virus with a width of a mere 1/10,000th of a millimeter would in a few short weeks bring the entire world to its knees?

Later the Peoples’ Daily (Renmin Ribao), the official newspaper of the Chinese Communist Party (CCP), and the tabloid Global Times, which is also controlled by the Party, both used this term on multiple occasions.

So it would seem that at that stage, the use of “Wuhan virus” did not bother the CCP in the least. No doubt that was because they concluded using a geographical identifying name, a method that had similarly been used for other viruses, was easier to understand than using the official name “COVID-19.”

So the righteous indignation the Chinese authorities are feigning now about the use of the term “Wuhan virus” by foreigners is nothing more than the result of a policy flip-flop in Beijing. The usefulness of a complete about-face when expedient is a given for military strategists. (RELATED ARTICLE: Why ‘Wuhan Virus’ is the Appropriate Name for this Pandemic)

We now know that the CCP hid the truth about the novel coronavirus for several weeks, and muzzled doctors who sought to tell the world the truth, jailed journalists, and obstructed scientific investigations.

As a result, the health of countless Chinese and other people around the world has been destroyed, the death count continues to spiral upwards, while the global economic system has descended into chaos. The Chinese authorities cannot escape responsibility for all this damage.

By their very nature, totalitarian regimes seek to hide inconvenient facts. They typically focus their wrath on the media.

It was no accident that the three foreign newspaper organizations which had their China correspondents expelled had editorialized that the spread of the coronavirus had shown the limits of totalitarian rule. Revealing this fact was absolutely unforgivable in the eyes of the CCP. The subsequent tit-for-tat expulsion of media representatives was eerily reminiscent of the days of the Soviet-United States Cold War.

March had already arrived when the Xi Jinping regime launched its full-scale counterattack. On March 4, Xinhua ran an astonishing editorial, stating that “the world should thank China” for taking extreme measures to control the virus.

Since the Wuhan virus has reached U.S. shores, it has raged like wildfire. Three states quickly called for emergency orders, later joined by 45 other states, and a federal state of emergency was declared for those regions. Pointing to this situation, a Xinhua editorial gloated over China’s success in controlling the coronavirus “while the United States by contrast is in the middle of a fierce storm.”

The same editorial threatened that if U.S. President Donald Trump is really intent on cutting the China-based supply chains of companies from around the world, in retaliation China could prohibit pharmaceutical exports to the United States. Americans would then find themselves thrown into the “mighty sea of the coronavirus.”

One thing is for sure, the CCP can boast of an impressive vocabulary for intimidation purposes.

It was true that the U.S. drug supply channels were totally dependent on China, and the coronavirus crisis has served to expose the fragility of this supply chain. So much so that the Federal Drug Administration (FDA) has notified Congress that, as a result of the spread of the coronavirus, the United States is suffering from a shortage of vital pharmaceuticals.

The fact is that China produces 40% of the world’s active pharmaceutical ingredients for such common medicines as antibiotics and painkillers. In fact, the United States imports 80% of its antibiotics from China.

In the Alice in Wonderland world of the CCP, those who should be apologizing deserve to be thanked. 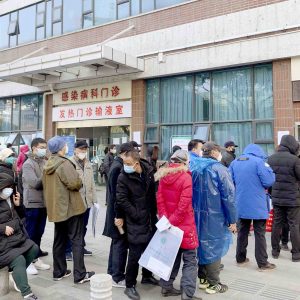 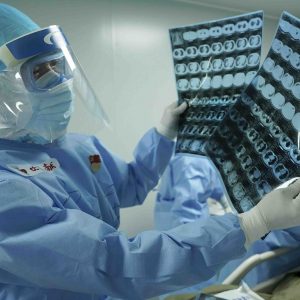 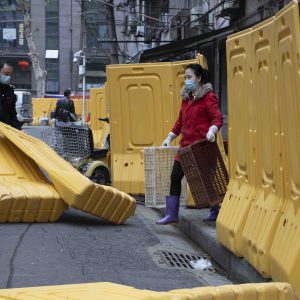 A city worker removes barriers used to seal off a community in Wuhan in central China’s Hubei province on Sunday, April 5, 2020. The quarantine in the city which is the epicenter of the coronavirus outbreak is to be formally lifted on Wednesday April 8. (AP Photo/Ng Han Guan)

Bradley Thayer, a professor of political science at the University of Texas at San Antonio, says that this penchant for deception on the part of the CCP reflects the failure of the Chinese totalitarian model during the current pandemic crisis, and the inevitable derailment of Xi Jinping’s “China Dream.” Therefore, China was badly in need of a new narrative.

The CCP unveiled the first page of that new narrative on March 10, when, for the first time since the outbreak of the virus, Xi Jinping showed up in Wuhan for an inspection trip. As the date for the visit of the CCP supremo approached, the number of new coronavirus patients announced dropped off.

Nevertheless, foreign media organizations carried reports that doctors working at isolation facilities had told them that the supposed “improvement is a deception.”

Be that as it may, during his inspection visit, Xi carried off the brilliantly-acted ruse of pretending that China had successfully controlled the virus. It might be said that there has been an operational shift for the Party from the first phase role of “concealment loser” to a second phase role of “suppression winner.”

Actually, it has come to light that, even earlier, after Xi had been subjected to a torrent of domestic criticism regarding the government’s response to the coronavirus, he ordered the authorities to divert criticism towards “slanderers” of China.

Of course, the United States was one of those “slanderers.”

After U.S. President Trump began calling the coronavirus a “Chinese virus” and U.S. Secretary of State Mike Pompeo labeled it the “Wuhan virus,” there was a vehement backlash from Chinese officials.

These moves were part of a strategy to portray domestic critics of Xi Jinping as “traitors aiding and abetting enemies of China.” Although even in democratic societies it is difficult to achieve transparency regarding policy failures, totalitarian societies like China are masters of deceit in terms of disguising policy failures so as to create a new appealing narrative.

In the third stage of its response to the coronavirus conundrum, the CCP has sought to present to the world the impression that in its alleged ability to contain the virus, “China is strong in handling crises.” Getting the world to accept this narrative of China as the safe “workshop of the world” is essential if China is to prevent an outflow of capital and foreign companies packing up and leaving the country.

In a contemptuous swipe at the United States, which now has more announced coronavirus cases than China, Beijing has been shipping out large volumes of pharmaceuticals and facemasks to countries in Asia and Europe.

In particular, it has focused its assistance on countries that have already bought into Xi Jinping’s pet “One Belt, One Road” economic zone concept, as it seeks to create the impression that China, rather than the United States, is the global political leader.

Horizon Advisory, a U.S. research organization focused on global geopolitical, technological, and economic competition, says that because of the time lag in infections by the coronavirus between its inception in China and spread throughout Asia, Europe, and the United States, Xi’s regime conversely views the pandemic as a golden opportunity.

Since Europe and North America are feeling the full impact of the pandemic with a time lag after its outbreak in China, economic activity in those countries will not be able resume till well after the Chinese economy is up and running. Beijing therefore will seek to monopolize the global demand for goods.

Nevertheless, there is one pitfall in prematurely announcing that China has suppressed the coronavirus epidemic within its borders. In past cases of fighting epidemics, just when the authorities have relaxed virus countermeasures, their societies have been overwhelmed by a second wave of the same pandemic