What Measures Can Japan, U.S. Take to Defend the Western Pacific Against China’s Aggression? 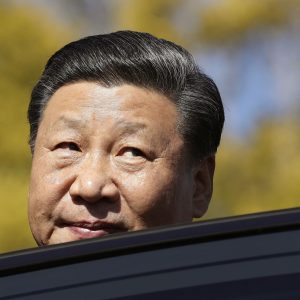 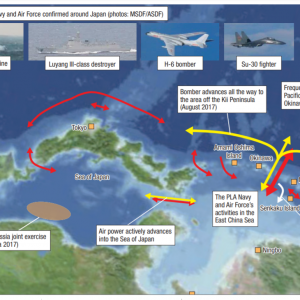 The White Paper Defense of Japan 2018 makes it clear that “Chinese government ships have routinely and repeatedly intruded into Japan’s territorial waters. And Chinese naval vessels and air forces has further expanded its operations in areas including the waters surrounding and airspace over the Senkaku Islands.”

China’s air and naval deployments have been especially challenging in the Sea of Japan and around Miyako Island, Yonaguni Island, and the Senkaku Islands. China has infringed on overflight rights in the East China Sea and directed fire control radars at a Japan Maritime Self-Defense Force destroyer.

According to an article in Stars and Stripes, “Chinese ships intruded into Japan’s territory near the Senkakus 36 times in 2016, 29 times in 2017, and eight times in the first three months of 2018.”

This makes it clear that defensive measures are needed. Putting a garrison of Ground Self-Defense Force soldiers with anti-ship missiles and air defenses on Miyako Island is a good first step in deterring these activities by China.

More defensive measures are needed, however.

China threatens to invade Taiwan and has taken aggressive action against the Philippines. This is one of the reasons the U.S. Army is pursuing the concept of developing a deployable Multi-Domain Task Force (MDTF) to the region.

Any deployed task force, however, faces a capable Chinese People’s Liberation Army (PLA) that has spent a long time developing its own multi-domain capabilities. Chinese strategists pay close attention to developments in U.S. military doctrine and thinking, and discussion of MDO is no exception.

Two researchers in particular at the PLA’s National Defense University Political College, Liu Shuoyi (刘朔邑) and Li Bo (李博), have analyzed the American concept in Analysis of the U.S. Army’s Multi-Domain Battle Concept [美军 ‘多域战’概念 探析]. They argue that “the shift of U.S. forces from Iraq and Afghanistan toward Asia also influenced the U.S. Air-Sea Battle concept and had a strong effect on traditional Army operations under the mode of highly-informationalized operations [高度信息化的作战模式].”

The PLA frames the Army’s MDO effort as another U.S. attempt to respond to and defeat China’s own counter-intervention/area denial and repel (反介入/区域拒止) strategy — one designed to keep enemy forces from intervening in a conflict near China.

In response, the PLA has developed a number of practical capabilities that could stymy, or at least challenge, the MDTF as well as any garrisons that the Japan Ground Self-Defense Force (GSDF) deploys. The PLA is developing the operational concepts necessary to integrate the domains of war to thwart any deterrent efforts by Japan and the U.S.

In a reform of the PLA in 2016, China established a Strategic Support Force (SSF) that addresses the need for information operations, space operations, intelligence, surveillance and reconnaissance (ISR), EW and cyber warfare for the PLA. In addition, the PLA has developed a range of capabilities to support precision strikes on targets at great distances from China using over-the-horizon (OTH) radar capabilities that can be used with reconnaissance satellites to locate targets and then attack them with cruise missiles, ballistic missiles, ships, or aircraft.

The PLA’s development of missiles is quick and, in many arenas, poses the most significant threat to Japan and the United States. China’s work in hypersonic missiles and missile warheads, which go more than five times the speed of sound, creates increased threats at sea, on land, and in space.

The PLA now has its own GPS-like satellites, the Beidou system, and, with Strategic Support Force capabilities, can interrupt or destroy U.S. and Japan positioning, navigation, and timing (PNT) capabilities. This means that a number of weapons systems would not work, and troops would not instantly know their position.

The PLA Marine Corps has expanded from two brigades to six brigades, now with improved special operations capabilities, making it more capable against the Southwest Islands and the Senkakus.

PLA advancements in missiles of all ranges are discussed in some detail in Defense of Japan 2018. The PLA Rocket Force now has approximately 1,200 short-range ballistic missiles capable of hitting targets near China such as Taiwan.

The PLA has new conventional medium-range ballistic missiles that increase the range for precision strikes against land targets and naval ships operating out to and beyond the “first island chain,” roughly extending from Russia’s Kamchatka Peninsula to the Malay Peninsula and including parts of the Japanese archipelago, the Ryukyu Islands, the Northern Philippines and Borneo.

The PLA has intermediate-range ballistic missiles that can target Japan and as far away was Guam, well into the “second island chain, including the Japan Sea, the Philippine Sea, and the Indonesia Sea, the Kuriles, Hokkaido and the Japanese Islands, Guam, the Marianas and Palau Islands.” Two of China’s deployed missile systems are designed to target large, moving ships at sea with hypersonic, maneuvering warheads.

The People’s Republic of China (PRC) would unquestionably view Ground Self-Defense Force garrisons and a deployed (or deploying) Army MDTF during a period of tension or conflict as potential threats.

In response, the PLA would likely begin with soft attacks that would pave the way for hard attacks. Initial (soft) attacks would include a suite of EW and counter-reconnaissance assets to neutralize enemy missile sensor and anti-missile systems, as well as to interfere with the adversary’s C4ISR architecture. This would pave the way for kinetic — likely missile, air and naval — attacks.

One of the biggest threats comes from the speed and accuracy of hypersonic warheads. Right now there are no effective defenses against weapons or warheads with those speeds.

The threat of hypersonic warheads demands a protective response.

To that end, a combination of passive measures — like high mobility, deception, electromagnetic signature reduction, or emissions control and camouflage — can help defend a deployed unit. However, active measures like jamming and other electronic countermeasures also have great application.

High precision microwave weapons, particle beam weapons, and laser weapons are among the technologies that can address the hypersonic threat. But these systems remain in the development phase in Japan and the U.S. When the weapon systems are more mature, they could be combined with artificial intelligence and new fire control systems to create better defenses.

Among the ways to respond to the threats from the PLA are passive defensive measures like high mobility, deception, electromagnetic signature reduction or emissions control, the use of frequency hopping radios, multi-channel and high-frequency communications and camouflage. All of these measures can help protect a deployed unit.

Well dug-in forces and stored equipment can sustain military operations for extended periods of time. Also, active non-kinetic measures like jamming and other electronic countermeasures by Japan and the U.S. can help protect deployed forces.

The biggest issue today is that deployed forces lack technologies that can address the hypersonic missile and warhead threats discussed above. Systems are now in the development phase; once developed, combined with artificial intelligence, advanced target recognition means and new fire control systems, could offer increased protection. The PLA’s propensity to mass missile fires, use drone swarms and use missiles decisively with surprise creates a situation that could easily escalate.

(Find Part One of this series, here.)