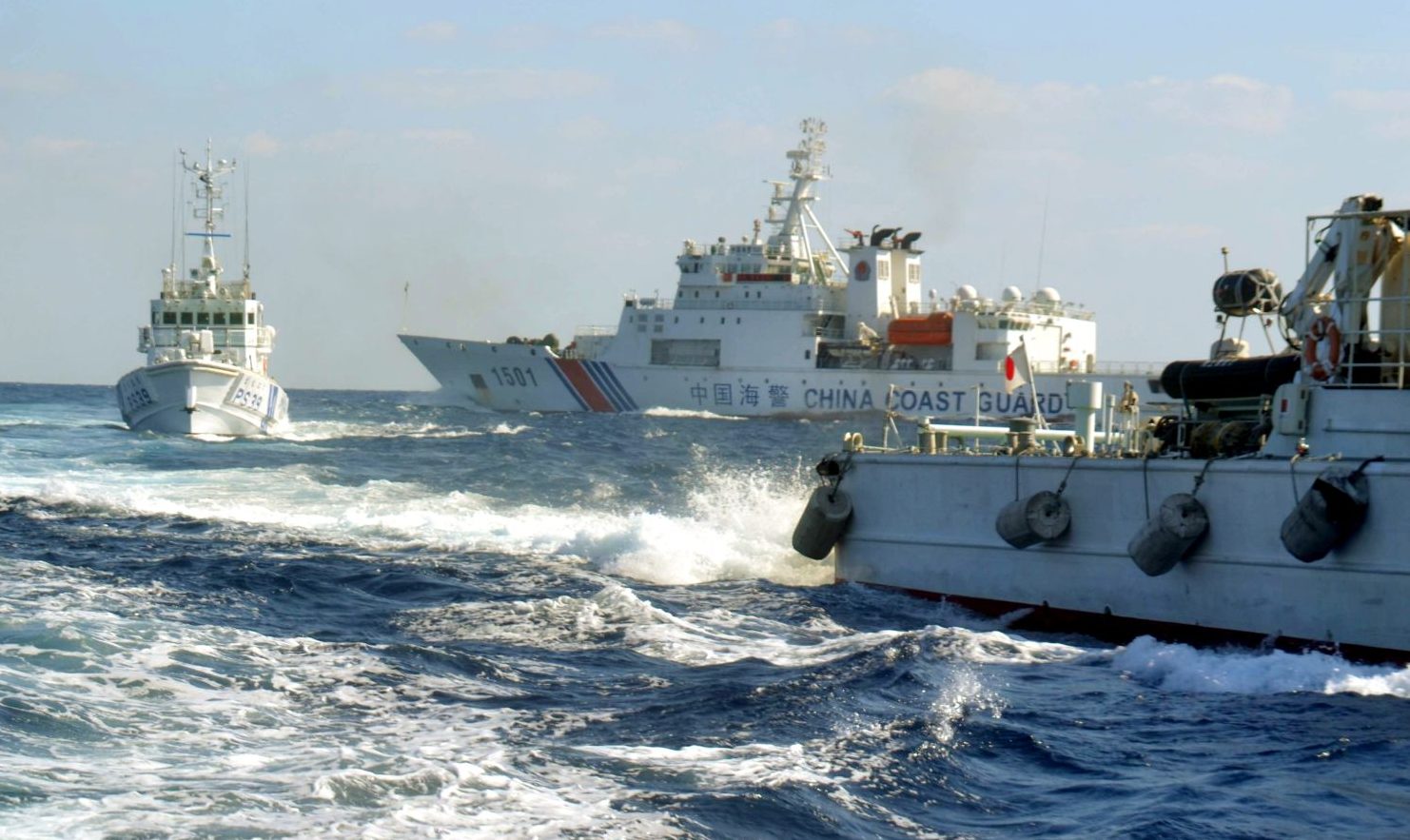 Part Two:  What Measures Can Japan, U.S. Take to Defend the Western Pacific Against China’s Aggression?

In April 2019, Defense Minister Takeshi Iwaya demonstrated Japan’s efforts to defend its territory in response to China’s assertiveness in the maritime domain when he toured a new Ground Self-Defense Force (GSDF) base on Miyako Island.

“The Miyako Island camp is on the front lines of our country’s defenses. We are seeing steady progress over the defense of the southwestern region,” he said.

On Miyako the GSDF has had a 380-member security unit since March 26.   In the future, Japan plans to put missile units on the island and to increase the size of the garrison to 700 or 800 soldiers. There also will be combined United States-Japan testing of operational concepts related to the defense of islands, island chains and archipelagos.

In 2017, the U.S. Marine Corps employed the High Mobility Artillery Rocket System or HIMARS during an exercise with the Japan Ground Self-Defense Force’s 11th Brigade during Exercise Northern Viper 2017 on Hokkaido.

The HIMARS is a mobile, ground-launched missile system with a range of about 186 miles, but its range can be extended. (Now that the U.S. is no longer constrained by the Intermediate Nuclear Forces Agreement, it can develop and deploy land-based missiles comparable in range to those already deployed by China.)

HIMARS is similar to Japan’s Type 12 Surface-to-Ship Missile. It is truck-mounted and can be operated in a network with other missile launchers.

In July 2018, the JGSDF deployed these surface-to-ship missiles and participated in joint training with U.S. Army HIMARS for the first time at the U.S. RIMPAC exercise. Now, in 2019, the U.S. 1st Infantry Division intends to test the HIMARS system against ships from Okinawa, with the objective of developing a deterrent against Chinese ships operating in the Senkakus, the East China Sea, and the South China Sea.

Why These Measures Matter to Japan and its Allies

These efforts by the U.S. and Japan are timely. Chinese ships have repeatedly entered Japanese waters around the Senkakus, creating tensions. The People’s Liberation Army Air Force has practiced maritime missions along with the PLA Navy and Naval Air Force at great distances from the Chinese coast. In 2017 and 2018, China conducted a number of passages through the Miyako Strait, the Tsushima Strait, around the Senkaku Islands, and through the Bashi Channel, between Taiwan and the Philippines.

All of these affect U.S. partners and allies, but for Japan’s Self-Defense Forces the most direct effect is on Japan’s Southwest Islands and in the East China Sea. Thus, efforts to deter China’s actions and to be prepared to defend against any aggression are important.

American military leaders acknowledge that the Army cannot dominate the land battlefield without access to — and the capacity to take advantage of — air and cyber and space domains. There is an obvious sea component, too — the Army is contemplating engaging ships with long-range missiles.

The U.S. Army is developing new operational concepts for the Indo-Pacific region that will help counter China’s activities.

For the U.S. Army, the focus after World War II has been on approaches large-scale land warfare with major ground formations using forces to block and enemy, fix its forces in place, and attack them with a major, decisive force. This might work in Korea, and is applicable in Europe. However, in the Indo-Pacific, the concept has little utility to defend island chains or straits using land forces.

Thus U.S. Army is radically changing both military culture and the conduct of operations in their incorporation of Multi-Domain Operations. The Army realizes that being a ground force, alone, is insufficient in the 21st century.

The Army must be able to take advantage of, and defend in, other domains like air, space, the electromagnetic spectrum including cyber, and the maritime domain.

U.S. Army Pacific Commander, General Robert B. Brown, described the Army’s efforts to develop a Multi-Domain Task Force (MDTF) as “a significant step toward integrated, joint formations, and we are driving the progress toward the changing nature of warfare.”

This MDTF includes a more robust incorporation of cyber and electronic warfare in various echelons of Army units, an expansion of the personnel and resources devoted to space operations, and new ways to conduct anti-ship operations from land with precision long-range fires (Jen Judson, Defense News, August 5 edition).

This monograph briefly examines U.S. Army efforts to develop operating concepts and conduct Multi-Domain Operations (MDO) at different levels of war. Then it takes a more extensive look at how the People’s Liberation Army has adopted the concept of multi-domain warfare and analyzes the capabilities of the PLA to counter the Army’s nascent MDTF.

The U.S. Army’s Road to the MDTF

U.S. Army efforts to claim proficiency in Multi-Domain Operations arguably began with an exercise on February 12, 1995, when an Army Tactical Missile System (ATACMS) was successfully fired from the deck of the USS Mount Vernon. (The USS Mount Vernon was an anchorage-class dock landing ship and was decommissioned in 2003.)

Progress stalled after that exercise; momentum did not pick up again until October 2016. At a seminar discussing the concept of a “Third Offset,” then Secretary of Defense Ash Carter announced that the DoD Strategic Capabilities Office was exploring “integrating an existing seeker into the ATACMS, enabling it to hit moving targets, both on land and at sea.”

DoD officials acknowledge that today’s systems are limited by their dependence on precision navigation and timing signals from GPS. In the future, they will need new seekers and independent navigation systems that can be attached to the front of a missile to provide a way to operate in a GPS-denied area.

Japan faces the same challenges with its own anti-ship missiles and air defenses. The chances of the Army’s MDTF operating in such an environment are high — particularly if it pre-combat defensive operations at a time of increased tension with China. Nor is the problem is not unique to the Army; the U.S. Marine Corps (USMC) also is refining its own concept of a multi-domain Expeditionary Amphibious Base Operations (EABO) that involves missiles, artillery, aircraft, ISR, air defenses and cyber, EW and space support.

Some of the concepts involved in fleshing out an MDTF are not new. In Iraq and Afghanistan, the Army successfully employed cross-functional teams. These were used in the Rim of the Pacific Exercise, mentioned earlier, in the summer of 2018.

These concepts respond to the need to engage with China as a potential threat. Combined-arms units of infantry, artillery (such as HIMARS), air defense, communications and ISR units such as the MDTF could help deny China’s air force and navy unfettered access through such restricted routes as the Miyako Strait. Elsewhere in the Pacific the concepts can help defend the Bashi Channel, the Lombok Strait, and the Sunda Strait.

In developing such defensive capabilities, the U.S. and Japan must carefully examine the ways that the Chinese People’s Liberation Army operates and how the PLA uses its own military to thwart the defenses of the U.S.-Japan alliance.

(Part Two of this article will discuss China’s capabilities to thwart Multi-Domain Operations.)