Where to See Iris in Tokyo 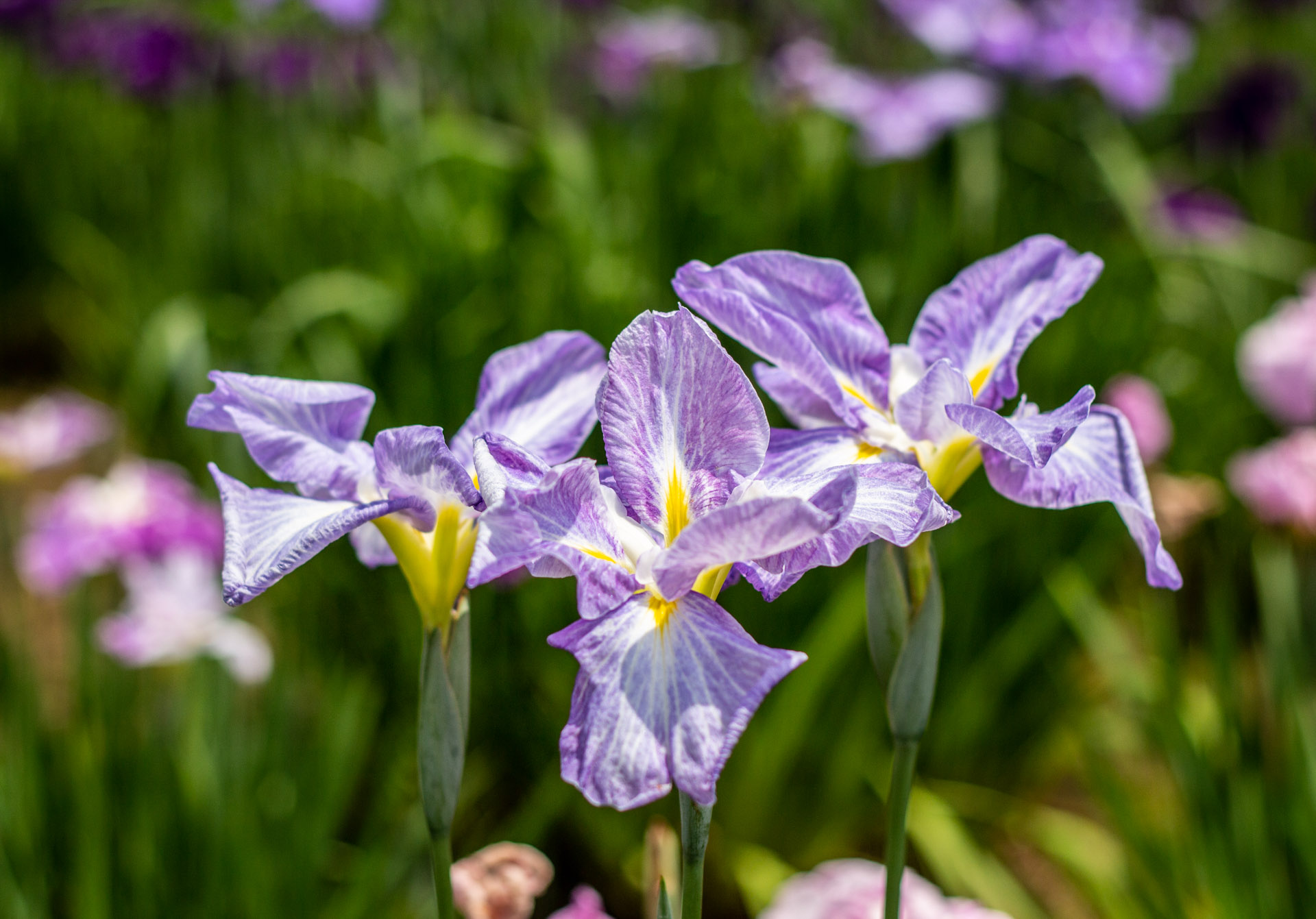 As the last of the sakura petals fall, preparations are already underway for the next garden-goer’s delight: the iris. Planted in March and nourished by tsuyu, or the rainy season, Tokyo’s iris bloom in early June, ushering in the summer.

With hundreds of local varieties and deep roots in Japanese culture, these popular perennials add excitement and color to the rainy season and should not be overlooked.

It’s said that the iris gets its name from the Greek word for rainbow, perhaps owing to the numerous shades of white, yellow, mauve, indigo and deep purple across its many species.These variations are just one of the many reasons this ornamental flower is so beloved. Symbolizing things like wisdom, hope, faith, eloquence, and valor, they are proudly featured in cultures all around the world.

Here in Japan, the native “Japanese Iris” refers to not one, but three main species.

Ayame (Iris sanguinea) can be found growing wild in dry soil. It flowers from early May to mid-June.

Next is kakitsubata (Iris laevigata), which prefers wetter conditions. It is cultivated in gardens, and flowers in the second half of May.

Also highly cultivated and requiring similar wet conditions, hanashōbu (Iris ensata), flowers latest, from the beginning of June. This last species is the most well known of the three.

Thanks to a breeding trend in the Edo Period (1603-1867), the number of Japanese iris varieties grew by hundreds, and these days there are now over 2,000 varieties to enjoy.

Iris, or shōbu in Japanese, has been referenced in Japanese art and literature as far back as the 12th century. Famous appearances include paintings by Hiroshige in his “One Hundred Famous Views of Edo” series, Ogata Korin’s “Irises” and haiku poems by the famous Basho.

Culturally, the iris has come to represent loyalty, a noble heart and warrior spirit. This is perhaps because shōbu, using different characters, can also mean dueling and contest.

For this reason, the iris has long been associated with Children’s Day (previously Boy’s Day) on May 5th. Even now, the sword-shaped leaves are placed in the evening bath in an annual tradition called shōbuyu. These fragrant, relaxing and medicinal baths are also said to bring good luck and instill some warrior spirit while you soak.

Where to See Iris in Tokyo

Seasonal flower viewing is a popular activity in Japan, from the plum and cherry blossoms in spring through to the fiery autumn leaves toward the end of the year. If you’re here for the first few weeks of June, you’ll be perfectly positioned to see iris unfurling their petals in shrines and gardens all over town. Though, to pay proper homage, try visiting one of these popular shōbu-en (Japanese iris gardens) in Tokyo.

While iris are typically at their peak between June 1 and June 15, it’s always best to check the venue’s website or social media for real time information. Just as we’ve seen with the early blooming of cherry blossoms, you can’t always accurately predict nature.

Tokyo’s most famous iris garden lies deep inside the Meiji Jingu Shrine grounds’ inner garden. This secluded haven was commissioned by Emperor Meiji for his wife Empress Shōken and became a treasured spot within the grounds.

Go as early as March and you can see the planting of over 150 species and 1,500 plants. By early to mid June, the plants reach maturity and color the landscape with dabs of white, blue and purple.

This garden is temporarily closed for the 2021 season due to COVID-19 safety measures, but it should be open for the 2022 season.

Located beside Tokyo Dome stadium and entertainment complex, Koishikawa Korakuen Garden is a tranquil urban oasis that dates back as far as the 17th century. Stroll along the winding paths to view the picturesque ponds, bridges and lush flora including plum, wisteria, rice fields and, come rainy season, iris.

This garden is scheduled to open June 4, 2021 (according to Twitter).

A stroll through this quiet little haven is perfect any time of year, though early May (7 to 15) is when you’ll catch the iris in bloom. What makes a visit here so special is the fact you can pair it with a viewing of Ogata Korin’s “Irises” (Kakitsubata-zu), a National Treasure. Read more about this stunning painted screen here.

Surrounded by rivers, the soil in Katsushika ward is perfect for growing Iris, and it has been a popular shōbu-en spot since the Edo Period. There is usually an annual Katsushika Shōbu Matsuri (Iris Festival) which is held across both Horikiri Shōbuen Garden and Mizumoto Park.

With 200 cultivars and 6,000 iris, this small garden is one of the most popular iris-viewing spots in Tokyo. It also features in one of Hiroshige’s paintings from his “One Hundred Famous Views of Edo” series. When it’s not hosting the annual iris festival, this park is also visited for plums, wisteria, winter cherry blossoms, and peonies.

It’s only fitting that the largest park in Tokyo’s 23 wards would house Tokyo’s largest Iris garden. With 14,000 iris of 100 varieties, it’s no wonder it’s part of the annual festival. The entire park covers 227 acres and is home to a diverse range of flora and fauna, with something to see year-round.

Shōbunuma Park is home to five iris fields featuring around 140 varieties and over 8,000 plants. A wooden path is set up so you can walk up close to the blooms. Also within the grounds are a 4-meter waterfall, waterwheel and waterway. It’s the perfect little summer park.


If you’re in town between late May and mid June, be sure to visit one of the many great shōbu-en iris gardens. You’ll go for the flower viewing but come away with an extra dose of good luck, good cheer and enough warrior spirit to see you through the rest of the rainy days.