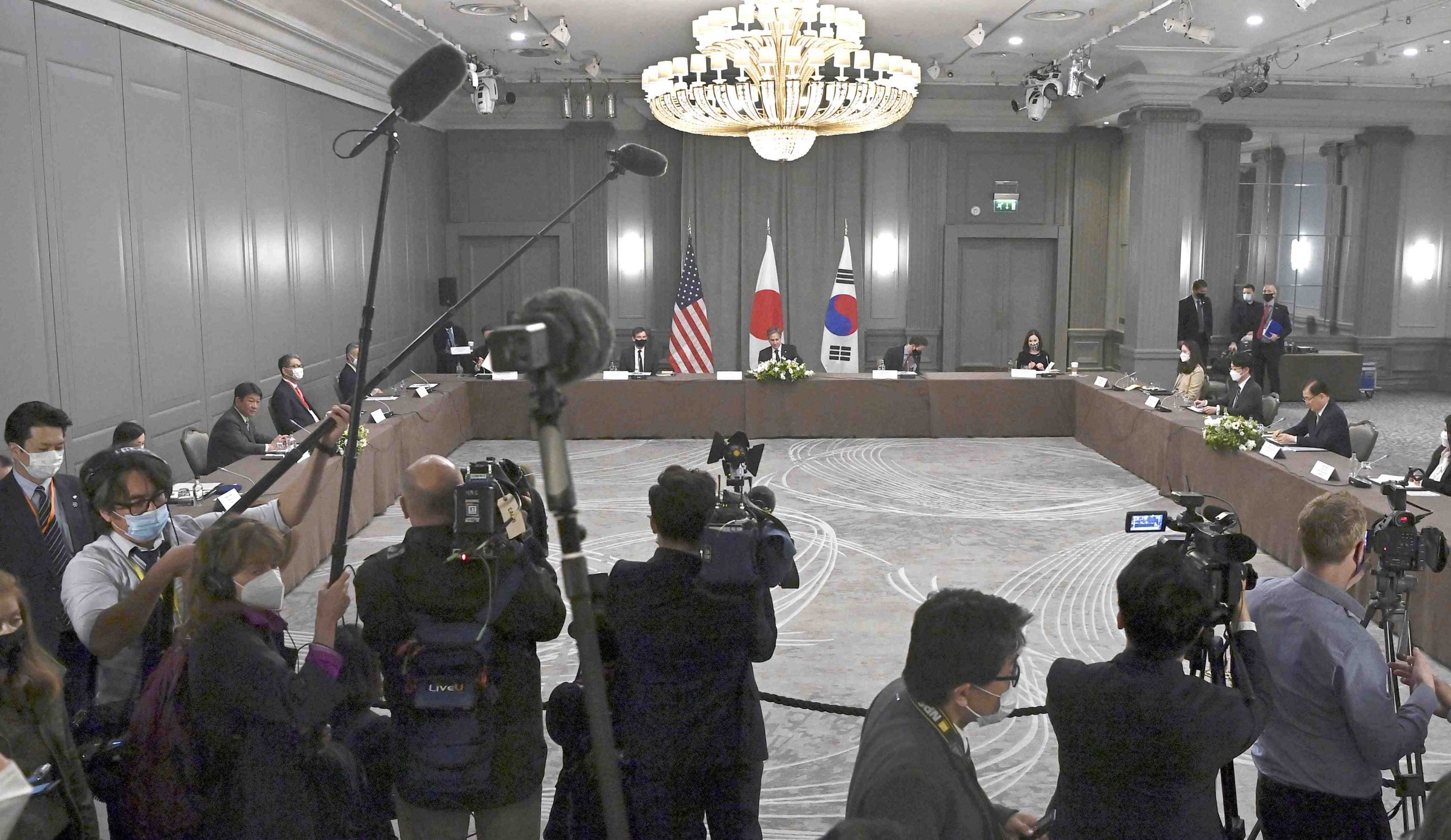 United States' Secretary of State Antony Blinken, center top, participates in a trilateral meeting with the foreign ministers of Japan Toshimitsu Motegi, third from left at tabel, and South Korea's foreign minister Chung Eui-yong, second from right at table, on the sidelines of a G7 foreign ministers meeting in London, Wednesday, May 5, 2021.(Ben Stansall/Pool Photo via AP)

I find it quite difficult to accurately read people’s emotions when most of their faces are covered with white paper masks.

Sometimes I try to judge their feelings through their eyes or body language, although I cannot claim to be an expert at this.

I therefore had to rely on intuition when I looked at the masked faces of the Japanese and South Korean foreign ministers when they appeared together in London this week.

I am afraid I saw no signs of pleasure.

Chung Eui-yong and Toshimitsu Motegi stood stiffly side-by-side, in a conference room where the curtains had been drawn, blocking out the morning spring sunshine and the view of a lovely park outside the window.

The message from their bodies suggested discomfort and frustration.

The remarkable thing was that they had met all. After all, prior to that encounter in London, it has been many months since the two countries communicated at this high level.

And although there are no signs of a sudden diplomatic thaw, it does seem as though the two parties have at last started to test the temperature of the ice.

Mr. Motegi told an online press conference after the meeting, “We were able to share the view that we cannot leave the Japan-South Korea relationship as it is.”

He also indicated his willingness for another meeting with Mr. Chung in the future, although it’s not clear on what terms this would take place.

Mr. Chung’s discussion with Mr. Motegi took place on the sidelines of a gathering of the Group of Seven Foreign and Development Ministers held in London.

South Korea is not a member of the G7 but was invited to attend as a guest, along with representatives from Australia, South Africa, and ASEAN.

The inclusive nature of the guest list was a signal that the G7 members don’t want it to be seen as an exclusive club that only furthers the interests of a few rich countries. It is an organization which aims to strengthen democracy. China and Russia were not invited.

The grand setting of Lancaster House near Buckingham Palace created an environment in which democratically elected development and foreign ministers exchanged ideas on many geopolitical issues.

Japan and South Korea both have excellent relationships with the United Kingdom. On the billboards of London’s Piccadilly Circus, advertisements for Hyundai play out next to ads for Sony and Coca-Cola.

The host of the G7 event, the British Foreign Secretary Dominic Raab, put it this way: “I do see the increasing demand and need for agile clusters of like-minded countries that share the same values and want to protect the multilateral system.”

The spring ministerial meeting was a prelude to the big G-7 summit in Cornwall in the South West of Britain, which will take place in June 2021.

Next time, national leaders will join the talks hosted by Prime Minister Boris Johnson. It will be President Joe Biden’s first scheduled trip abroad since taking office. Mr. Narendra Modi from India and Mr. Moon Jae In from South Korea are also due to take part.

Under Mr. Biden, the United States is seeking to rebuild friendships and alliances, which were strained under Donald Trump. America is also embarking on a massive $2-trillion USD spending spree, which other countries hope will help enrich their business sectors, too.

Ministers from many lands therefore jostled for a chance to meet the U.S. Secretary of State, Antony Blinken, in London.

Mr. Motegi and Mr. Chung had met him earlier in 2021 in Tokyo and Seoul. It was at Mr. Blinken’s invitation that they appeared together in a room on the morning of May 5, firstly for three-way discussions and then for a tense bilateral conversation.

From the perspective of the U.S. State Department, it was a relief that two of America’s key Asian allies were at last talking again. The British Foreign Commonwealth and Development Office can also take credit for smoothing the way for the talks.

However, the joyless faces and grim accounts of the meeting itself are not very encouraging.

The Koreans started with a complaint about Fukushima.

They said they are worried that contaminated water from the nuclear power station in Japan, which is soon to be released into the ocean, could damage the health of Korean people and pose a threat to the marine environment.

Mr. Motegi must have known this was coming. He has also faced a lot of criticism on this issue within Japan, especially from the powerful fishing lobby.

In response to such complaints, he takes the same position as Prime Minister Yoshihide Suga, who emphasizes that the decision to release the water into the sea came after consultations with experts, who reassured the government that it carries a very low risk of radioactive pollution.

Foreign Minister Chung then harked back to the time many decades ago when Korea was a Japanese colony. He reasserted the rights of the Korean courts to sue Japanese businesses for money relating to that period. In response, Mr. Motegi politely and firmly explained that the government of Japan does not support such a plan.

Fortunately, there was one important area on which there was common ground: North Korea.

A statement from the South Korean Ministry of Foreign Affairs read: “Both sides appreciated close communications on North Korean issues between South Korea and Japan and among South Korea, Japan and the United States. They committed to continuing cooperation to make substantive progress in achieving complete denuclearization of and establishing permanent peace on the Korean Peninsula.”

For help in understanding this rather cautiously worded document, I consulted Edward Howell, a lecturer in politics at New College, University of Oxford.

He explained that Mr. Biden told Congress recently that he regards North Korea and Iran as two of the greatest threats to the United States and will approach North Korea with “diplomacy and stern deterrence.”

On the issue of denuclearization, Dr. Howell told me he has noticed significant ambiguities in the messages from the U.S. State Department.

Dr. Howell says that, so far, he feels rather disappointed by the Biden administration’s approach towards the North Korean issue.

“The U.S. has assured us that it is not going to return to the policy under Obama, which was described as ‘strategic patience.’ At that time, the U.S. patiently waited to see if North Korea would denuclearize before it would respond. That approach did not achieve much,” he said.

Over the weekend, North Korea accused the U.S. of maintaining a “hostile policy,” and there are fears that it could show off a new missile platform when South Korea’s President Moon visits Washington in a few weeks’ time.

Dr Howell said: “The world is running out of time because North Korea is intent on being a nuclear state. It has no inclination to trade off parts of its nuclear program. We therefore need some form of creative solution and, in my view, that starts with dialogue.”

Duncan Bartlett is a regular contributor to JAPAN Forward. He is the editor of Asian Affairs and a research associate at the SOAS China Institute, University of London. Find other articles by Mr. Bartlett on his author page.