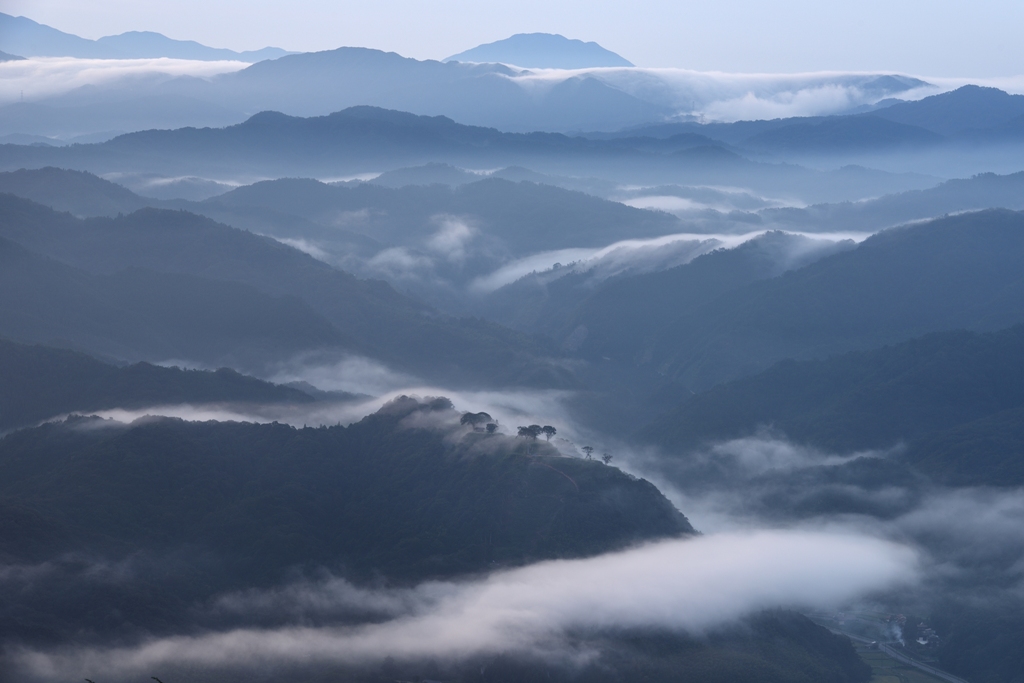 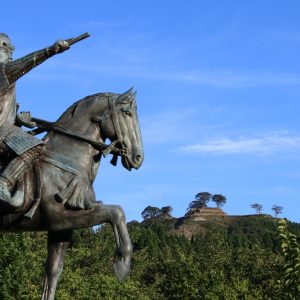 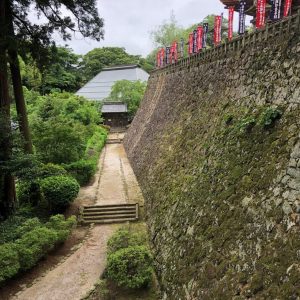 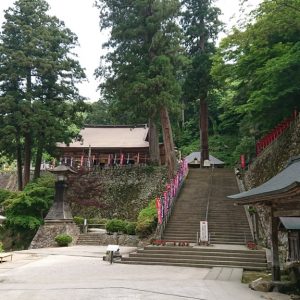 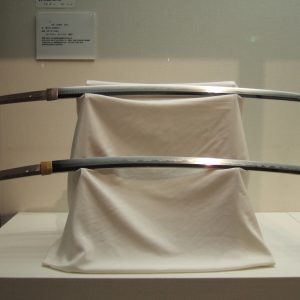 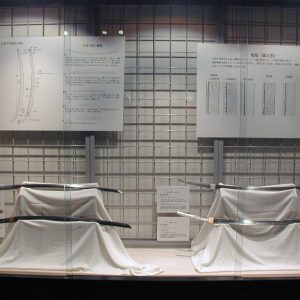 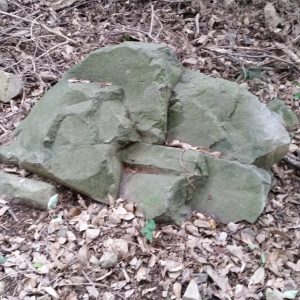 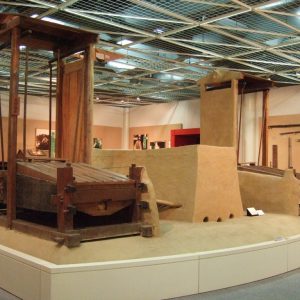 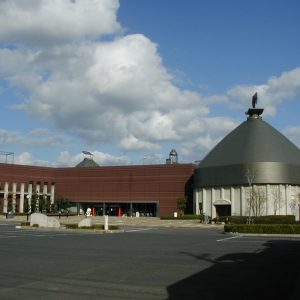 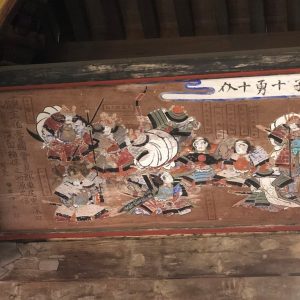 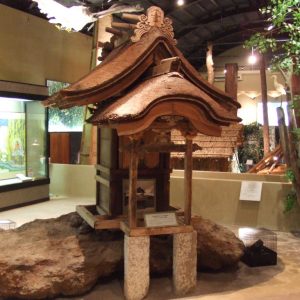 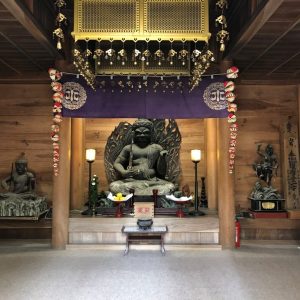 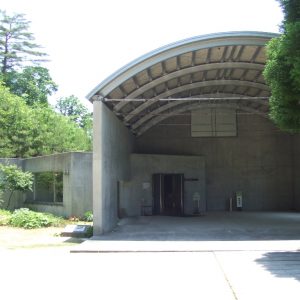 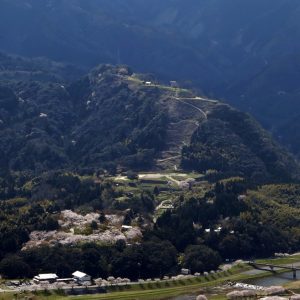 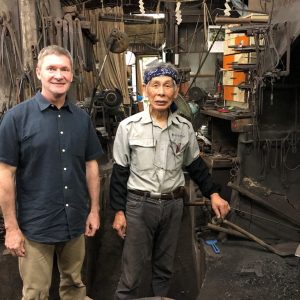 The city of Yasugi has a long history with Japanese steel. Hitachi Metalworks — co-sponsors of the Nittoho Tatara — also has a factory there.

Even before the introduction of western modern blast furnace technology, though, Yasugi and the surrounding areas had been a center of Japanese iron and steel production since ancient times.

However, probably the most famous site in Yasugi today is that of the Adachi Art Museum and Gardens that attracts millions of visitors every year.

One of the reasons that Yasugi was so dynamic in iron production is that the area originally belonged to the Amago clan, a very powerful clan that had constructed one of Japan’s five largest mountain castles, Toda Castle. Perched on top of Mount Gassan, the castle ruins are very accessible today, with modern concrete staircases to help visitors to the top.

Mount Gassan and the site of the old castle are very impressive when viewed from the surrounding areas, even though no castle buildings remain. Not to mention, there is a stunning view of Yasugi from the top.

The whole top of the mountain is flat as it was removed in order to build the castle. The castle was demolished following two sieges by the long-term enemy of the Amago clan, the Mori clan. The second siege in 1566 successfully brought an end to the Amago clan’s reign.

According to locals, Shikanosuke Yamanaka was one of the bravest and most loyal among famous samurai in Japan. He served lord Katsuhisa Amago and is said to have been fond of the saying, “Bring me your seven worst things — I will accept them all.”

It was also said that before the second world war, Shikanosuke was required reading in school. His legend is also said to have been the favorite of Ryoma Sakamoto.

Another interesting anecdote was a claim the National Treasure sword — the Mikazuki Munechika by Sanjo Munechika, known during the Warring States period as “One of the Five Greatest Swords Under Heaven” — was originally owned by the lord of Amago.

This is interesting, as modern traceable history of this 900-year-old sword starts with Oda Nobunaga and Hideyoshi.

Other sword enthusiasts were also aware of these claims and, in conversations with them, even said, “It is thought that the whole reason for the two sieges on Todo castle was to obtain the Sanjo Munechika.” Therefore, it is quite feasible that, after the fall of Toda Castle in 1566, the sword eventually ended up in the hands of Nobunaga.

Another interesting coincidence is that the crest on Shikanosuke’s helmet was that of the three-day crescent moon. Even today, as you travel around Yasugi, you will see Shikanosuke’s crest used in many places — even on bus stops.

There is also a five-story pagoda on the route to a rock in the nearby forest, where Shikanosuke was said to have sharpened his sword. The stone is also on the route of a special pilgrimage to 33 statues of Kannons around the grounds of the temple, where worshippers pay tribute to each one in order to honor the souls of their ancestors.

The rock is unusual as it is the only prominent rock in the whole surrounding area. It is also conveniently shaped so that one might feel comfortable sitting on it to polish or sharpen a blade. However, there remains little evidence that this would have been the place to sharpen one’s sword unless it was an urgent situation, and nearly 500 years of weathering has removed any evidence.

Very close to the Hitachi Metalworks factory is the Wako Museum (Museum of Japanese Metal). Outside the museum is a fine display of kera (iron and steel blooms) that date from the Edo period, through the Meiji to Modern periods. Inside the museum are very concise and thorough displays of the Japanese ancient method of iron and steel making (tatara). There is a fullscale model of a tatara in the middle of the downstairs gallery, surrounded by many smaller models of tatara through the ages, tatara steel production, and actual tools with several videos to help the viewer understand the process.

On the second floor of the museum are some Japanese sword and sword manufacture displays. There is also an exhibit of the history of steel in the area, including the history of the Hitachi metals company. As an added bonus, there is a whole gallery dedicated the Dr. Kuniichi Tawara, the first scientist to study Japanese swords in a scientific manner.

Close by in Hirose is the Kanayago shrine dedicated to the goddess of iron and steel production.

Many tatara have legends that Kanayago founded their site by landing in a Katsuragi tree riding a bird. Local tatara curator Toshifumi Takaiwa explained that in order to have the best conditions to make good steel, the land is generally fertile with lots of trees from which to make charcoal, and the water is pure from the mountains to help filter the sand iron into a useable condition. So this kind of area would also have Katsuragi trees.

The head priest of Kanayago shrine would usually have been a member of the Abe family, who was considered an incarnation of Kanayago. All the murage of various tatara would come and consult with him and pray for good production. This means that the Abe priests had a wide knowledge of tatara metal production, so they also acted as a kind of consultant.

Next to the Kanayago Shrine is the Kanayago Shinwa Minzoku Museum. The museum is small but has much information about tatara and ancient steel production.

If you could visit all four tatara museums in the San’in region — the Kanayago Shinwa Minzoku Museum, the Wako Museum, the Oku-Izumo Tatara and Sword Museum, and the Museum of Tetsu in nearby Yoshida-cho — it would really round out your knowledge of Japanese steel, as these sites complement each other beautifully.

There are only two local connections to sword making remaining in the area. The first is Japanese kitchen knife maker Kuniyoshi Moriya, who has a store in the entrance of the Wako Museum. His father, Munemitsu, was a originally sword maker from Okayama, but gave up making swords after the second world war. He moved to Yasugi and began making kitchen knives because Okayama had been ravaged by the war and is said to have commented that, “Yasugi produces good steel.”

Another former swordsmith is Hiromitsu Koto, a third-generation swordsmith. However, these days, Hiromitsu mainly produces handmade candlestick holders that are popular with foreign clients. Hiromitsu lamented, “There is not much call for swords, and the traditional Japanese tatara steel is hard to get a hold of in large quantities these days.” His son has followed in his footsteps in the forge, but has no interest at the moment of attempting to get his swordsmith license.

Yasugi has such a rich history and many cultural sites to visit. There are also beautiful small ryokan and onsens that, at certain times of the year, include free rides to watch the fireflies at night.

It is a shame that most people only go to the Adachi Museum and then leave. They are missing out on so much more. I also suspect that there is also still a lot more to be discovered in Yasugi.

You can get to Yasugi from Izumo and Yonago airports. Alternatively, by train from Okayama station.